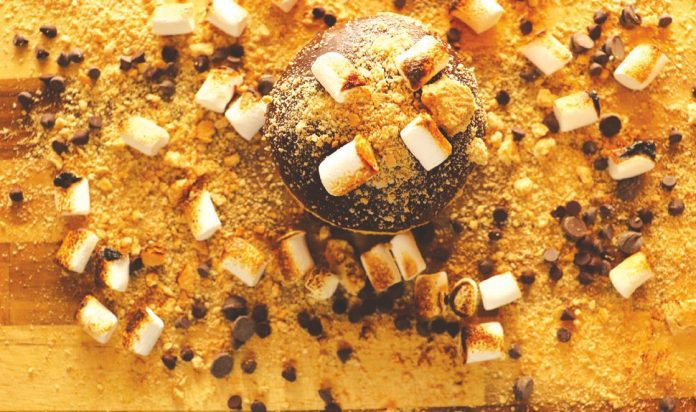 No, that’s not a typo, it’s a revolution. From a seasonal Hanukah-exclusive menu item to the new focus of her business, home baker Luly Kabasso has her hands full with her newest innovative creation.

A little over a year ago, Luly started her business cooking homemade prepared meals for community members.  Like most startups, Luly turned to social media, specifically Instagram, to advertise her menu options. Her menu catered to those who had no time to cook, and others who wanted high-quality home-cooked dietetic options. Luly’s delectable menu included a quinoa better-for-you version of eggs benedict, salmon salad, steak and potatoes, and much more.

In March of 2019, Luly got married and began the mitzvah of baking challot for Shabbat. Shortly thereafter, her delicious challah was added to the Luly’s Kitchen menu. About this time Luly really started to experiment and create original flavors in the kitchen. It was lots of trial and error, but most of her attempts turned was successful. This was soon reflected in her growing menu. Some of the attempts that did not make the menu were lebneh and mozzarella stuffed challah, which were both connected to the holiday of Shavuot. Some of her most popular flavors that did make it to the menu week after week were zataar, olive tapenade, pulled brisket, and szchug and deli.

The next colorful creation to hit the Luly’s Kitchen menu were babkas. With this versatile Shabbat dessert classic, Luly continued to push the envelope with her innovative creations. Funfettie, brownie, cotton candy, kenafe, chocolate covered bamba, macaroon, and Boston cream are just eight of the more than twenty-five babka varieties that have graced the Luly’s Kitchen menu. Due to popular demand, Luly stopped taking on new clients for her meal prep service and began to focus on challahs and babkas, while also offering clients a few Shabbat dishes and salads..

When asked where her creative ideas come from Luly responded, “Most of my creations come about by my trips to the supermarket.”  “I walk up and down the aisles and think: ‘What can I stuff into challah or a babka to make something exciting for my menu this week?’”

Luly’s Instagram followers and client base began growing at a rapid rate in this first year of business. She started her page at about 800 followers, by just switching her personal account into a business account. From the time she started till around December, she grew that 800 follower account into about 2,500 by December of 2019. That is very fast for a new account. Luly’s popularity was growing due to word of mouth. She was constantly creating new things people wanted to try and putting out quality images of her colorful challahs and babkas. 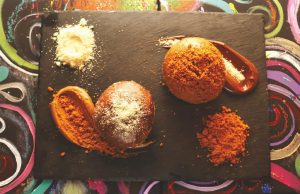 In December, a customer suggested to Luly that she attempt frying one of her babkas for the Hanukah season. Intrigued by the idea of having a special Hanukah offering for her menu, Luly decided to take on the challenge and do just as suggested. The first attempt used the challah and babka dough, which was left to rise for 15 hours like it normally would. Then the dough was formed into balls and filled like a babka before frying. The first trial was a flop. Luly realized if she filled the dough pre-fry, the center wouldn’t cook through. For the next attempt Luly simply fried balls of dough and coated them and stuffed them afterwards, and, voila! the BONUT was born.

Combining a babka and a donut turned out to be the greatest invention since the croissant donut, the cronut. (The cronut was invented in 2013 by NYC pastry chef Dominique Ansel and was popularized in 2015 by Donut Plant, which recently became Kosher Certified.) Luly went to work testing flavor after flavor for the bonuts Hanukah menu debut. S’mores, creme brulee, cinnamon toast crunch, kenafe, red velvet, and vanilla with sprinkles are just a few of the bonut flavors on the continuously growing menu. Orders came flowing in like wildfire! When customers got their hands on some bonuts they were eager to share pictures on social media. The rave was electric, and the demand for bonuts was only getting started. 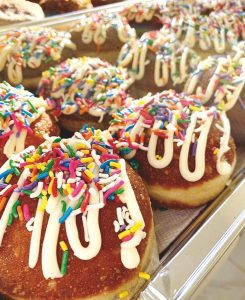 Hanukah came and went, and Luly’s business was forever changed. Her account went community viral, and she had nearly 1,000 more followers then she did pre-bonuts. Although the holiday season was over, the craze for bonuts did not die down as Luly had expected. She planned on going back to business as usual, making challah and babka creations, but her clientele could not easily forget the fried treat they now craved. Due to popular demand, Luly began to take bonut orders every few weeks to try to keep them special, hoping the interest would keep for months to come if she kept it exclusive.

On Feb 9th, 2020, Luly exhibited at a pop-up boutique show. She made 300 bonuts for the event and sold out within the first two hours. Only those who had VIP tickets with early admission were able to get their hands on this trendy treat.

Later that week, Luly announced she would shift her business to follow the direction it was leading her. She put out a message to her clients and followers that the weekly menu would from then on consist only of bonuts, and she would still make challahs and babkas upon request. In the same announcement, she let everyone know where she would now be delivering to Brooklyn, Manhattan, Queens, and Five Towns in Long Island.

“If I had to choose just two reasons I love what I do, they would have to be: getting to do hafrashat challah every week and also being a part of everyone’s Shabbat table.”

Look out for Purim bonut basket options! And keep your eye out for Luly and her ever-growing list of delicious creations she calls a menu! For more information, please call (347) 409-5806.