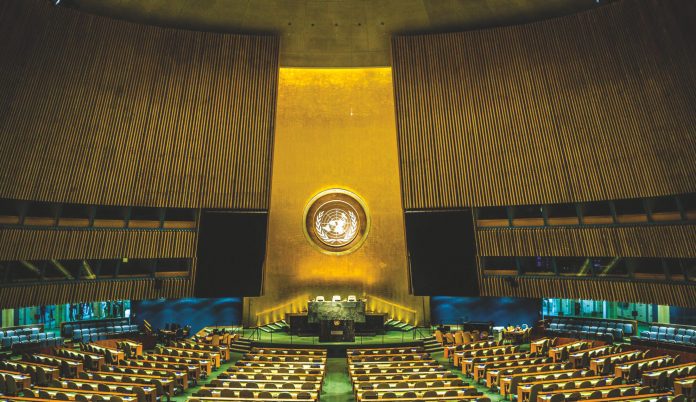 At the United Nations, Israel is constantly being barraged by one-sided condemnations, biased resolutions, decades-long enmity, and harassment from her enemies.

In the face of these hostilities Israel does not stand by quietly. On the world stage, Israel’s voice is loud and clear, telling her side of the story, and protesting unjust treatment. But what occurs behind the scenes at the UN is largely unknown. Until now.

Aviva Klompas knows the inside story, having served as the Director of Speechwriting for Israel’s Permanent Mission to the United Nations in New York City. Klompas crafted highly acclaimed speeches for Ambassador Ron Prosor, that served to advance Israel’s policies and inform the public.

During Klompas’ time at the UN, several major events occurred, including the collapse of four Middle Eastern states, the international “Iran Deal” that gave the Islamic state $150 billion, countless anti-Israel resolutions, the Palestinians’ bid to join the International Criminal Court, the kidnapping and murder of three Israeli teenagers, and fifty days of war between Israel and Hamas in Gaza.

Community Magazine asked Klompas to talk about the trials and tribulations of her job, and Israel’s struggles in the UN.

Certainly, Israelis are much more direct in their feedback, which is, for better or for worse. At first it is startling, but then you get to understand that it’s not personal. There is a certain freedom once you can understand that. Once you understand, you realize that this is my team and we are trying to achieve the same thing together, and we are going to get to the point. There is a directness that you can appreciate. But it certainly took some getting used to.

CM: Could you give me a specific example on a time where you locked horns with your Israeli counterparts?

Aviva: One example that comes to mind is when we were giving a speech for an event that was to raise awareness of efforts in Israel by a particular NGO to support children with autism. There was an exhibit of paintings by children set up by the UN. I was writing remarks for a reception that the ambassador would be attending. It happened to also be when there were elections for Israel’s president.

Our spokesperson had been interested in revising the remarks that I had written for the reception to not just be about Israel’s partnership with the NGO’s amazing work in that area, and how Israel is leading the way in working with children with autism. They wanted to add a more political note to it. I felt it wasn’t the right thing to do. We don’t have to always politicize everything Israel does. There are plenty of good news stories and apolitical situations, and this could be an opportunity for that.

On the other hand, the spokesperson thought that nice stories don’t always make news, and if there is an opportunity to garner attention for our work, then take the opportunity. So, we were coming at it from two different perspectives. I remember we were totally at odds about which way it should go. The chief of staff happened to come by and say, “Here’s a compromise. Why don’t we say we will invite the President of Israel to come to the UN, and be able to see the amazing work that is going on.” So, it was halfway in between having this political note, and not making it all about sensationalizing the politics of it all.

CM: What would you say was the toughest part of the job? 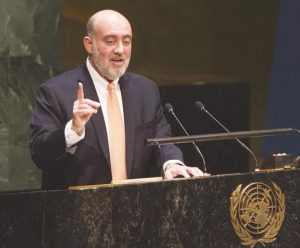 Aviva: Learning to write in someone else’s voice, and to learn the things they wanted to say and didn’t want to say. If it was me speaking, I’d want to say it one way. As a speech writer, you have to learn to appreciate that’s the person that is going to be live and on the record. That’s the person that is going to be archived and be on the news. That is the person who has to be able to stand by what they are saying. So, your own opinions or personal style has to take a back seat to the person you are writing for. It’s not always easy. The deeper you are in your work, the more it’s very personal. You want it to be the best it can be. The better you can get to know the person you are writing for, the better you are going to be at this. It took me a long time to be able to write well for Ambassador Ron Prosor – he has a very distinct style. He is, by his own rights, extremely articulate, funny, charming, and intelligent. To be able to write for somebody like that takes time.

CM: Tell me about a backfire, something you thought would go one way but, in the end, did not.

Aviva: Lots. One example was very early on, as I’m learning to write his style, I kept being told, “Be more direct. Be more assertive about things.” I couldn’t really figure out when, where, or how. There was one instance where there had been an incident in Israel with its neighbor where Syria had fired on an Israeli post. It wasn’t the first time. It has happened before. The natural course of events is that Syria will write an outrage letter to the UN telling their side of the story, and Israel will do the same thing. I thought to myself: channel outrage. I tried to do so. I wrote this very stern letter, and I took it to the ambassador to review. He read it quietly to himself and said, “I believe that you have declared war on Syria in this letter.” In that moment, I wasn’t sure if I’d finally succeeded in nailing the right tone or not. Then, he continued, “To be clear, you don’t have any authority to declare war.”

CM: What in your job did you find the most unexpected? 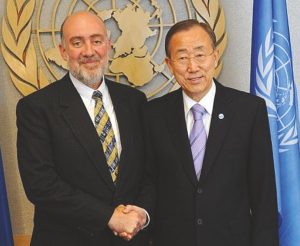 Aviva: My boss. He, certainly, took an unexpected approach to diplomacy. One example is that I nicknamed him “The Singing Diplomat.” He’d be all too happy to break out into song in the middle of a speech, like the time he sung a song about African nations, which got him a standing ovation from some of the African nations in the General Assembly. He would sometimes sing John Lennon’s “Imagine.” In a speech about women he sang Aretha Franklin’s RESPECT. That was an unexpected way to see someone approach diplomacy. His perspective was that most countries don’t have a full-time speech writer on staff, so they are written by a technical expert. They can be dry and not entirely lively. Ambassador Prosor felt it was very important to be heard, and to be heard you have to be different. He really leaned into it because he wanted people to listen to what he was saying. He knew he had to capture attention to get people to listen.

CM: Tell me about an emergency session and how you coped with it.

Aviva: So, it’s pretty stressful. You can get a phone call any time of day or night, or over the weekend, and be told the Security Council is convening a special session, come down to the office, we have to get writing. You could have a couple of days’ notice or a couple of hours’ notice.

One the one hand, it didn’t happen very early on in my job. It happened when I had a little more experience. And it got to the point that I could write pretty fast. So, it wasn’t an absolute disaster. But still, you realize that you only have a few hours to pen what is going to be said, and emergency sessions tend to get a lot of publicity. So, it’s more than likely going to be live broadcast somewhere – certainly in Israeli media.

CM: And finally, if someone comes to you and says, “I want to be a speechwriter at the UN for Israel,” what would they need to know?

Aviva: It’s chaotic and haphazard. It’s hard work, long hours, and considerable stress. And you’re going to need to learn to write an endless number of quasi-funny one liners.