Rabbi Avraham Moshe Kahana was born in Jerusalem, Israel, during the British Mandate. He was scion to prestigious, community-oriented families, and from a young age, his teachers predicted a great future for him.  Rabbi Kahana came to America with his mother and sisters in 1949, joining his father who preceded them to  Detroit, Michigan.

Rabbi Kahana studied at Yeshiva Torah Vodaath in New York.  The yeshiva’s founder Rabbi Shraga Feivel Mendlowitz, encouraged his students to  educate American-born Jewish children and stem the tide of assimilation.  Rabbi Kahana and his close friend, Rabbi Joshua Bakst (who later became principal of Ramaz), heeded the call.  With his loyal eishet hayil at his side, Rabbi Kahana began with the 6th grade at Yeshiva Rabbi Moses Soloveitchik in Washington Heights.

Rabbi Kahana’s career path took him to Westchester Hebrew Day School, White Plains Hebrew High School, Yeshiva Dov Revel, and the Max and Dorothy Cohen High School.  In the early 1970s, Rabbi Kahana became the principal at the prestigious Yeshiva of Flatbush Elementary School, serving until June, 1979.  In a school that eventually had over 1,200 students, Rabbi Kahana not only knew each student’s name, he knew how they were faring at home and academically.  One former student, now an orthopedist, told the family, “Every year I aced the IQ test that was administered to me – yet I was a failing student.  Rabbi Kahana would walk the halls with me, his arms around my shoulders, telling me how smart I was and that I not only could, but WOULD succeed. ‘But Rabbi,’ I would say, ‘I only got a 47 on my test!’  ‘Yes,’ Rabbi Kahana answered, ‘but last week you got a 40.  You are improving!’  It was this faith that stood by me through my MCATS, Medical Boards, and to this day whenever I encounter a difficult case.”

A Delicate Balance of Leadership with Fatherly Love 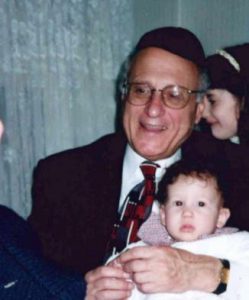 Rabbi Kahana understood his students.  He treated them as his own children. He loved them fiercely, pushing them to fulfill the potential they didn’t believe they had, yet never hesitating to be strict when necessary.   For example, whenever Rabbi Kahana needed quiet in the auditorium, he would slowly say into the microphone – one… two… three.  There would be total silence.  Woe to the student who was still talking by the count of three.  Eventually, Rabbi Kahana would simply stand before the students for a moment or two, and then call out “three” into the microphone!  And it worked!  Rabbi Kahana would march together with his students on Solidarity Sunday and at the Salute to Israel Parade every year, reinvigorating his students and keeping the momentum as their energy waned.

Although he was a principal of such a large school, teaching was his first love. He always taught at least one class a week.  He often walked into classrooms and quizzed the students on what they were learning. Chocolates and shiny pennies were much sought-after treats that he dispensed to his beloved students. Many students said, “Rabbi Kahana never went to students’ bar mitzvahs because then he would have to attend all of them – but he attended mine.”

In 1979, Rabbi Kahana left Yeshiva of Flatbush and took a break from the field of education.  He worked at Hirsch Wolf &Co., yet he remained in close contact with his many friends in the community, calling them before Shabbat and holidays.  After a five-year hiatus, Mr. Ronnie Tawil and Mr. Joe Esses called Rabbi Kahana back to his true calling, and he agreed to become the principal of a new high school they were establishing, the Magen David Yeshiva High School.  From its humble beginnings on 82nd Street in Bensonhurst until they moved into their current beautiful building on Bay Parkway, Rabbi Kahana nurtured yet another generation of students.  How many of us remember the huge ground-breaking ceremony!  The joyous move to the new (present-day) building, marching through the streets of Bensonhurst with the sifrei Torah?

The Kahana family thanks the many community members  who reached out to us during the short shiva.  We would love (and appreciate) hearing from anyone who wants to share their memories. Please contact me at: zaidykahana@gmail.co.

Tammy Eckstein is the daughter of Rabbi Kahana, a”h.