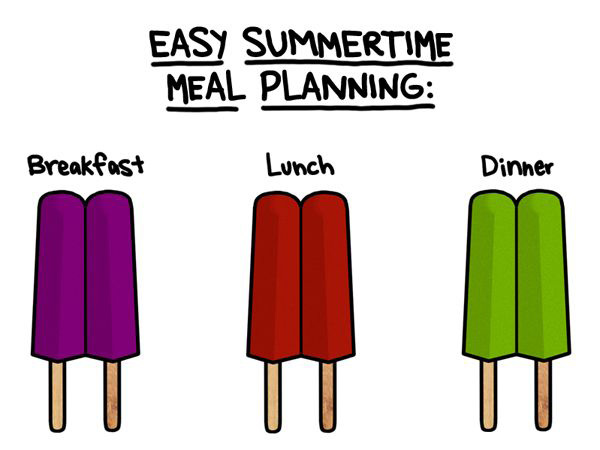 Too Hot to Handle

A guy goes to the doctor with two burnt ears. When the doctor asked what happened, he said, “The phone rang while I was ironing my shirt, and I accidentally picked up the iron!”

“That explains one ear, but what about the other?” asked the doctor.

When the power mower was broken and wouldn’t run, Lauren kept hinting to her husband that he ought to get it fixed, but somehow the message never sank in. Finally, she thought of a clever way to make her point.

When her husband arrived home that day, he found her seated out in the yard in the tall grass, busily snipping away with a tiny pair of sewing scissors.

He watched silently for a short time and then went into the house. He was gone only a few moments, and when he came back outside, he handed Lauren a toothbrush.

“When you finish cutting the grass,” he said, “you might as well sweep the sidewalk, too.”

Cindy was excited about visiting Granny Molly to celebrate her 104th birthday. After singing “Happy Birthday” and enjoying a piece of cake together, they got to talking.

“I can’t imagine what it’s like to have lived for such a long time,” Cindy reflected. “What’s the best thing about being 104?”

Bob the garbage man was assigned a new route in a quiet neighborhood. On his first day doing the new route, he came across a house that had left two garbage cans at the curb, a green one stacked inside a black one. He looked inside and saw that there was no garbage there. Thinking nothing of it, he went on to collect the garbage from the next house.

The next day, Bob noticed that the two garbage cans, stacked one inside the other, were at the curb again. He looked inside, only to find that once again, there was no garbage in the cans. Feeling a bit annoyed, Bob continued on with his day. But the next day and then every day that week, the same thing happened, and each day Bob would get more and more annoyed.

Finally, Bob decided he had enough and decided to complain to the owner about the empty cans being left at the curb. He walked up the steps to the front door and knocked. When the lady of the house answered, Bob got ready to scold her for wasting his time. “My name is Bob, and I’m your garbage man and” – but before he could continue, the woman cut him off mid-sentence and said, “Oh you’re my garbage man? Well, you’re not doing a very good job. I’ve been trying to throw out my old green garbage can for over a week now, but you just kept leaving it there.”

Last year, I entered the New York City marathon. But soon after the race started I found myself running in last place.

It was embarrassing. But then to top it all off, the guy who was in front of me, second to last, was making fun of me. He said, “Hey buddy, how does it feel to be last?”

“You really want to know?” I replied.

Then I dropped out of the race.

A Slice of Humor

While working at a pizza parlor, I observed a man ordering a small pizza pie, to go. He appeared to be alone. I asked him if he would like his “personal pie” cut into four slices or six. He thought about it for some time then said, “Just cut it into four slices. I don’t think I’m hungry enough to eat six.”

While looking at a house, Benjamin asked the real estate agent which direction was north, because he didn’t want the sun waking him up every morning.

“Does the sun rise in the north?” the agent asked.

Trying to stop himself from laughing, Benjamin explained that the sun rises in the east and has been doing so for quite some time.

To which the agent shook her head and said, “Oh, I don’t keep up with all that stuff…”