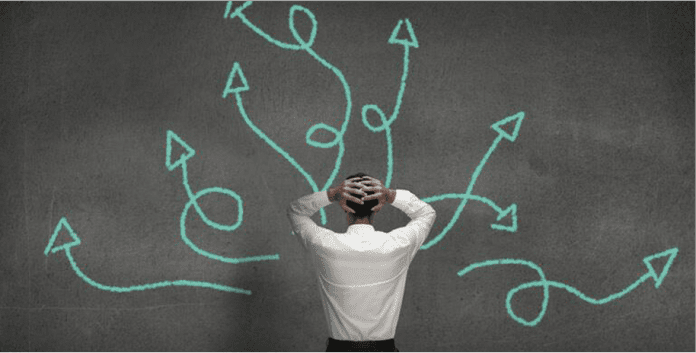 Believe it or not, there are times when our brain lies to us.  Our brain is not purposely trying to steer us in the wrong direction, but rather it has traveled down many roads with you and has accumulated a lot of data along the way and has made decisions about those experiences.  Now we know data can be tricky. Just look at the way the media manipulates data to make its own subjective point.  Well, our brain does the same thing – analyzes an experience (data), makes assumptions about it, and then moves forward through life having decided on the outcome of every single, similar future encounter.

Look at this example. When I was about six years old I had a high fever.  In the old days we were given Bayer baby aspirin – tiny orange flavored chewable tablets.  As I was six, my dosage was five tablets, which I thought was so unfair because my sister who was one year younger than I was only had to take three.  In any case, I bravely chewed up the aspirin and waited to feel better.  Instead, about a half hour after taking the aspirin, I threw up.  My six-year-old brain decided that the orange flavored tablets had caused me to throw up and forever associated the taste and smell of anything orange with regurgitating.  Needless to say, to his day, some 50 years later, I still avoid anything orange flavored – orange juice, orange candy, orange ices – nada, nothing, never!

So, my brain has lied to me about orange flavor.  Logically, I know I probably threw up because I had a virus.   But my brain has made an association that has not been broken.  This seemingly benign example has had an impact on my life, particularly as a child who refused to take baby aspirin ever again and less so as an adult who can’t stomach anything orange tasting or smelling.

Cognitive distortions are a different type of brain lie that occur when we experience stressful life events that shape our way of thinking.  We tend to make negative associations and assumptions and then act on them as if they were true.  My cognitive distortion “anything orange flavored will make you throw up” is an example of overgeneralization, assuming a rule from a result of one experience.

Aside from overgeneralization, there are many types of cognitive distortions that keep us stuck in negative thought patterns and cause increased anxiety and stress.  Following are a few examples.  When you read on you will probably be nodding your head saying, “Yeah, I do that, too!”

Shoulds – Should statements appear as a list of ironclad rules about how every person should behave. These thoughts may go something like, “He should have called me earlier,” or, “She ought to thank me for all the help I’ve given her.” Such thoughts can lead a person to feel frustration, anger, and bitterness when others fail to meet unrealistic expectations. No matter how hard we wish we could, sometimes we cannot control the behavior of others, so thinking about what others should do serves no healthy purpose.

Heavens Reward Fallacy – The false belief that a person’s sacrifices and self-denial will eventually pay off, as if some global force is keeping score, and that the people who work the hardest will get the largest reward. A person who sacrifices and works hard but doesn’t experience the expected pay off will usually feel bitter when the reward doesn’t come.

Always Being Right – In his article “15 Common Cognitive Distortions” John M. Grohol, Psy.D. writes:   When a person engages in this distortion, they are continually putting other people on trial to prove that their own opinions and actions are the absolute correct ones. To a person engaging in “always being right,” being wrong is unthinkable — they will go to any length to demonstrate their rightness.  Being right often is more important than the feelings of others, even loved ones.

It is quite evident that cognitive distortions have a negative effect on our self-esteem, our anxiety levels, and our relationships.  In the 1960s, the psychiatrist Aaron Beck developed cognitive behavioral therapy (CBT) based on the theory that most of the distress we feel about a situation comes from our beliefs about the situation and not from the situation itself.  Beck believed that cognitive distortions, ways that our mind convinces us of something that is not really true, are the driving force in our experience of stress, anxiety, and depression and these cognitive distortions determine how we react in stressful times.  He believed that challenging and ultimately changing these negative thought patterns were the key to reducing psychological distress.  CBT uses certain techniques to help a person recognize their own negative thought patterns and come to a more realistic understanding of what is really occurring.  Below are some of these techniques.

Consider alternative outcomes or reasons. We must be able to understand that our initial explanation of events is only one of many possible explanations rather that the only one there is.  For example, when we react with personalization, “she didn’t invite me to the party; I knew she never liked me” we are hurting our own feelings without knowing all the facts.  Instead, consider other reasons why you didn’t receive an invitation.  She was limited in the number of people she could invite, and she has a large family; the invitation got lost; she forgot to include me on the text… Some people will argue that thinking of alternative explanations for a person’s behavior “let’s the other person off the hook.”  And that could be a valid response if the other person was aware of your struggle…but they aren’t!  The only person you are letting off the hook is yourself.

Fact vs. Opinion Challenge – Many of us are stuck with cognitive distortions because we mistake facts for opinions.  Chris Rackliffe, author of 70 Life Lesson I Wish I’d Learned Sooner, suggests this fix.  “Take out your journal or write out your current thoughts on a sheet of paper. Go one by one and evaluate whether each belief is a fact or an opinion. Be honest and candid with yourself. Remember that facts are objectively true and opinions are deeply-held personal beliefs and therefore may or may not apply to others outside of you. For example, “I feel fat” is an opinion. “I didn’t work out today” is a fact.  The key is not to judge yourself regarding the opinions and to make behavioral changes when necessary based on the facts.

The Semantic Method – John Grohol suggests: “Every time you find yourself using a should statement, try substituting, “It would be nice if…” instead. This semantic difference can work wonders in your own mind, as you stop “should-ing” yourself to death and start looking at the world in a different, more positive manner. Shoulds make a person feel bad and guilty about themselves. “Wouldn’t it be nice and healthier if I started watching what I ate more?” puts the thought into a more curious, inquisitive phrasing.”

Thinking in Shades of Gray – To reduce the tendency to catastrophize, try to see the middle ground or gray area in a given situation. Instead of allowing yourself to think in extremes, practice rating how bad a situation truly is using a scale of one to ten with one being mild, like stubbing your toe, and ten being the worst, like someone dying. When what you are experiencing is compared to those two extremes, you begin to notice that things are not as bad as your catastrophizing had made them out to be.

If you find yourself unable to manage cognitive distortions and they are causing intense anxiety and disrupting your relationships, seek the advice of a mental health professional who can guide you with the techniques of cognitive behavioral therapy.