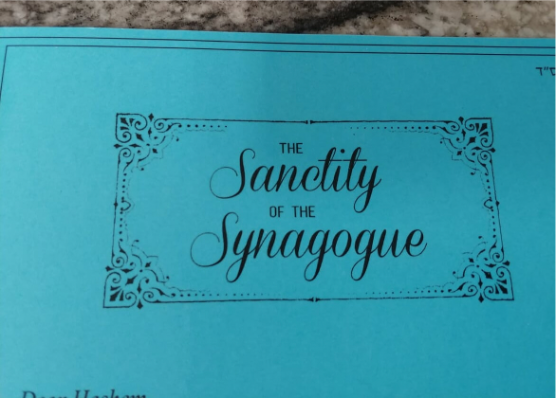 Many refer to the current pandemic as a true plague, a magefah. COVID-19 dramatically transformed our lives in so many respects. We wear masks to work and when we shop, and our children must be masked when they are in school and outdoors. We can’t visit with elderly parents or grandparents, or socialize with friends and family at the Shabbat table or on holidays.

We practice social distancing, many have been furloughed from their jobs, and small businesses have suffered. Most importantly, we buried and mourned too many family members, friends, and colleagues.

For months, we couldn’t pray to Hashem with a minyan in shul. It was painful to see our rabbis praying in their own homes without a minyan. Most shuls were shut down in mid-March 2020 for the sake of pikuah nefesh – protecting lives. When we were permitted to return to shuls this past summer, we were able to do so in limited numbers, wearing masks and keeping socially distant.

This heartrending time period, when we were forced to pray in our own houses, provided an opportunity for many to reflect on why shuls had to close.

Did we offend Hashem and act disrespectfully?
Were we kept out of shul because of our inappropriate behavior? Do we need to make amends and change our conduct in shul?
A group of concerned community members asked these same questions. They created a pamphlet that would inspire shul goers to be more mindful in shul now that we are privileged and blessed, thank Gd, to be united again in our sanctuaries. They called this initiative the Sanctity of the Synagogue, or the Protective Shield Project (PSP).

Their mission is to raise awareness of how we can behave with the utmost respect and honor to Hashem when we come to shul. Let’s set an example for all communities worldwide. We need as much protection as possible in these trying times!

Mr. Morris S. Ashear and Mr. Harry Adjmi were instrumental in the successful distribution of one thousand cards to the pews of most shuls in the Deal area this past summer.

The pamphlets were reviewed and approved by several esteemed rabbis of the Brooklyn and the Jersey Shore communities.

The next step is to distribute these PSP cards in our community shuls in Brooklyn.

A bet kenesset, or shul, has always been regarded as a Mikdash me’at – a “mini” Bet Hamikdash. The Zohar Hakadosh explains that when the Bet Hamikdash was destroyed, parts of it dispersed throughout the world. Wherever a piece landed, a shul would eventually be built. When the prophet Yehezkel warned of the imminent destruction of the Bet Hamikdash, he mentioned that Hashem would keep “a miniature Temple” in Bavel (11:16). This is interpreted in the Talmud (Megillah 29a) to mean that bateh kenesiyot and bateh midrashot would exist worldwide, and that Jews in the Diaspora would also have a synagogue to pray in.

Examples of Do’s and Don’ts in Shul

1.A shul is a makom kadosh (sacred place), and not a venue for socializing or discussing business. Arguments and lashon hara (gossip and negative speech about other people) must also be avoided.

2.Adults can model positive behavior for our children, our future leaders.

3.Leave the outside world when you enter the shul, enjoy your tefillah and communicate with Hashem.

4. During the week, please close and put away your cell phones in shul.

5. Do not talk during Kaddish, Kohanim, and during the reading of the Sefer Torah, and Haftarah.

6. Be well-groomed and dress respectfully and modestly, even in the summer. You are entering shul to meet the Melech Hakadosh, the King.

We conclude with a berachah from Mr. Morris S. Ashear:

“Let us maximize our prayers, remember not to talk in k’nees, and conduct ourselves with dignity. If we all cooperate and follow these guidelines as a community, we can hope to, please Gd, minimize the prevalent anti-Semitism, provide the highest level of protection, create a Kiddush Hashem, make the world a better place, and bring about the coming of Mashiah.”

Please feel free to order pamphlets for your shul and send any requests or questions to: SanctityoftheShul@gmail.com. Details of the project’s soon-to-be-launched website will be forthcoming.