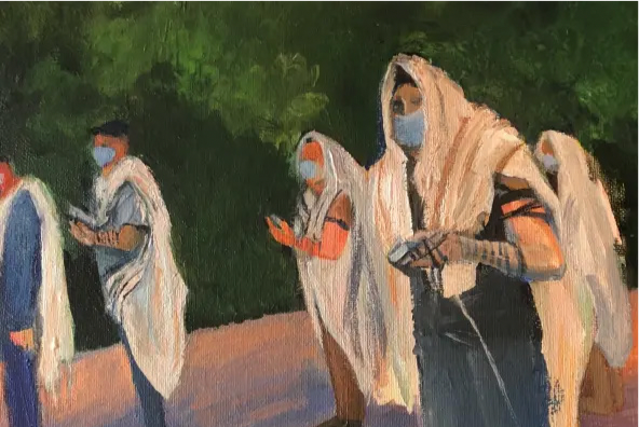 Rabbi Avraham Saba (1440-1508) was a brilliant rabbi, kabbalist, thinker, and writer in Spain, who endured a great deal of suffering and hardship throughout his life. He was expelled from Spain in 1492 along with the rest of Spanish Jewry, and went to live in Portugal. Just several years later, his two sons were kidnapped and forcefully baptized. He ended up having to flee Portugal, leaving behind his numerous manuscripts of scholarly writings, which he hid under a tree in Lisbon, hoping to one day return. Unfortunately, he never did, and the vast majority of his priceless scholarship has been lost.

Rabbi Saba died aboard a ship bound for Verona, Italy. The Hida (Rav Haim Yosef David Azoulay, 1724-1806), in his work Shem Hagedolim, relates that two days before Rabbi Saba’s passing, a torrential storm struck, and the ship was in grave danger. The sailors pleaded with the rabbi – who had taken ill – to pray for the ship’s safety. Rabbi Saba agreed, on the condition that if he died on the ship, the sailors would see to it that he receives a proper Jewish burial. His prayers were answered, and the ship was saved. The sailors brought his remains to the Jewish community of Verona, who tended to the burial.

If anyone can teach us about maintaining faith and religious devotion during difficult times, it is Rabbi Avraham Saba.

One cherished work which he composed and which we still have today is his Torah commentary, entitled Tzeror Ha’mor. In his discussion of Parashat Tazria, which we read this month, he offers a beautiful insight into one of the more enigmatic laws in the Torah, and encourages us to follow his inspiring example of faith and commitment even when confronting difficult challenges.

The Torah instructs that during the times of the Bet Hamikdash, after a woman delivered a child, she would have to bring two sacrifices, one of which was a hatat – sin-offering. As its name suggests, the hatat sacrifice is brought to atone for a sin which one has committed. The Gemara (Niddah 31b) thus poses the question of why a woman must bring such a sacrifice after delivering a child – something which not only has nothing to do with sin, but is one of the greatest mitzvot. The answer, which the Gemara cites from Rabbi Shimon bar Yohai, is that the excruciating pain of childbirth often leads women to vow never to cohabit with their husbands so that they would never need to endure this suffering again. Several weeks later, after the woman recovers and experiences the euphoria of having a newborn child, she regrets making this vow, and so she brings a sin-offering to atone for having sworn to separate from her husband henceforth.

Rabbi Saba makes a simple but important observation – despite the intense pain of childbirth, women nevertheless later reunite with their husbands and seek to beget more children. Gd implanted within women a natural yearning for intimacy with their husbands which overrides the natural instinct to avoid the agonizing pain of childbirth. This was said by Gd Himself, when He informed Havah after she ate from the forbidden tree, “ve’el ishech teshukatech” – she will have a “teshukah,” yearning, for her husband. And so even after the grueling ordeal of childbirth, the wife eventually seeks to resume her marital life.

Rabbi Saba adds that the word “teshukah” is related to the Hebrew word “heshek,” which is generally understood to mean “strong desire.” However, Rabbi Saba explains that this world actually has a more specific connotation, referring to a desire that transcends logic and reason. It speaks of a powerful drive for a close connection with somebody even when there is no rational explanation for it.

Rabbi Saba cites the example of Shechem, the prince of the city bearing the same name, who abducted and violated Yaakov Avinu’s daughter, Dina. Shechem’s father approached Yaakov and asked if he would agree to allow Dina to marry Shechem, explaining, “Shechem beni hashekah nafsho bevitechem – My son, Shechem, is infatuated with your daughter.” What he was saying, Rabbi Saba writes, is that Shechem had an irrational desire for Dina. There were many beautiful young women in the city who were more desirable than Dina, but nevertheless, Shechem wanted her. This was an irrational desire.

Similarly, Rabbi Saba explains, Gd implanted within women a natural, irrational “teshukah” to continue their relationship with their husbands even after experiencing the ordeal of childbirth, despite realizing that continuing the relationship will likely result in their having to go through that ordeal again.

The Love Amid the Pain

Rabbi Saba proceeds to apply this concept to our relationship with Gd.

The prophet Yeshayahu (26:16) describes how Am Yisrael responds to periods of crisis and hardship: “Batzar pekaducha, tzakun lahash musarecha lamo – In distress they have appealed to You, pouring out prayer as Your chastisement befalls them.” Rabbi Saba cites Rav Yosef Kimhi, a 12th-century Spanish commentator (who later moved to France), as explaining this verse to mean that even as “musarecha” – Gd’s harsh “chastisement” and punishments – afflict us, we do not abandon Him. We turn to Him and pour our hearts out before Him in prayer.

The next verse compares the Jewish Nation to a woman in labor: “Like a pregnant woman nearing both; she falls ill and cries in her labor pains – so were we because of You, O’ Gd.” Although a woman suffers terribly during childbirth, and she knows that this pain was caused by her husband having impregnated her, she nevertheless draws even closer to her husband afterward, and strives to build an even stronger bond with him. Similarly, despite the pain Gd occasionally brings upon us, for reasons we cannot understand, we nevertheless have an instinctive drive implanted within us to continue desiring a close relationship with Him. In fact, the more hardship we endure, the more fervently and intensely we pray and try to strengthen our bond with Him.

Then, the prophet goes even further, likening us to a woman who endures labor and then delivers a stillborn child, Heaven forbid (“…kemo yaladnu ru’ah”). Rav Yosef Kimhi explained that the joy of a healthy, beautiful newborn child helps the mother recover from the trauma of labor and reunite with her husband. Am Yisrael, however, do something even greater – we continue building our relationship with Gd even when He brings upon us pain and suffering that does not appear to yield any positive outcome. We sometimes endure hardship that does not bring us a “child,” any discernibly beneficial result. We don’t see any blessing emerging from the pain, in contrast to a new mother, whose suffering is followed by the unparalleled joy of a new child. Even so, we continue to yearn for a closer relationship with Hashem.

If these words had been written by a rabbi who enjoyed a tranquil, joyous life, we could perhaps be excused for having nagging doubts as to whether this can really be true, whether one can remain

passionately devoted to Gd amid pain and hardship. But these words were written by Rabbi Avraham Saba, whose life was filled with challenges. He suffered so much grief and anguish. We can only assume that the experience he describes here in this passage, the continued desire to cling to Gd even in times of pain and distress, is – at least somewhat – autobiographical. This is something he himself felt, throughout the many ordeals that he suffered.

Learning From Our Own Example

In truth, we ourselves have experienced this feeling firsthand.

When the pandemic struck, and as it lingered well beyond the limited time-frame after which we had hoped it would end, how did the Orthodox Jewish world, and our community in particular, respond?

We faced unprecedented challenges, our lives were thrown into turmoil, and many families suffered illness and even tragic losses. How did we react?

We did not turn our backs to Gd. To the contrary, we rose to the occasion. If we could not assemble for prayers in the synagogues, we prayed on our porches, in our backyards, or privately at home. If we could not get together for Torah classes, we got together to learn over Zoom. If our kids could not attend school, our devoted teachers and school administrators made arrangements for remote learning. If we could not get together with extended family for Shabbat and holiday meals, we had uplifting meals with our immediate families. If businesses were crippled, we generously stepped forward to help families in need.

For reasons we cannot understand, Gd decided to bring this crisis upon us and make Torah life very difficult. But this does not diminish from our desire and our determination to serve Him. To the contrary, it led to the redoubling of our efforts to pray, to learn, to assist those in need, and to perform mitzvot. Our lives were turned upside-down, yet we continued clinging to Hashem – with even greater conviction and greater vigor.

Normally, we are urged to learn from the inspiring examples set by great people. This time, I think we should learn from ourselves, from our own example. We showed what it means to remain devoted to Hashem even in challenging times, to respond to hardship with greater commitment and greater determination. This is a precious lesson that we can learn from ourselves, and take with us into the future.

We of course hope and pray that Gd spare us any further pain and suffering. But we have shown that even in hard times, our faith will never wane, and that our love for Gd is forever unconditional, and strong enough to weather any storm.