“We need to unify as a group in our NJ townships and educate the community about the increasing growth and dangers of tick-borne illnesses and the fiscal harm resulting from the over-population of deer in our own backyards.” ~~ Sherryl Bouganim~~

Did you know that New Jersey has been identified as one of the top three states in the country for Lyme disease, tick-borne illnesses, and the expanding tick population?

As we spend more time outside, so do insects and ticks. Ticks are small bloodsucking parasites that spread pathogens carrying infectious vector-borne diseases such as Lyme disease, Zika, and Rocky Mountain spotted fever. Humans, pets, and livestock can all become victims of these terrible illnesses. If not detected early on, they can develop into chronic conditions.

Sherryl Bouganim, (formerly Sherryl Betesh), an active member of our New Jersey community, is committed to ensuring we are educated and armed with the knowledge and resources to protect our community members from these potential issues. She is fiercely proactive about spreading information about potential dangers that can adversely impact our residents’ health and home environment.

Sherryl has identified two problems that have become “increasingly uncomfortable and dangerous.”

1. The physical illnesses resulting from Lyme disease and ticks.

We should all take these problems seriously. The severity of ticks and resulting diseases have been documented by authoritative research.

A 2019 Rutgers University research team identified eleven tick species living in New Jersey. The study resulted in a standardized tick surveillance program, which assesses reported positive results for Lyme Disease from bloodwork. In 2017 the first sighting of an exotic Asian tick, known as the longhorned tick, was right in New Jersey. It is one of two invasive species spreading around NJ which appear on white-tailed deer. The longhorned tick is similar in size to deer ticks and can go undetected on animals and humans, although they have not been confirmed as an immediate threat to people.

New Jersey already has one of the highest burdens of Lyme disease in the nation and its incidence rate of cases per population remains far above the U.S. rate. 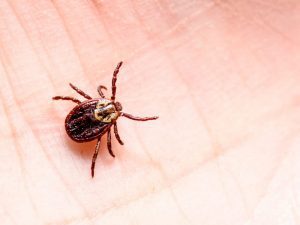 Professor Thomas Mather, a University of Rhode Island entomologist known as “The Tick Guy,” refers to the tick issue as a “hidden threat.”

“Bloodsucking ticks that carry an array of diseases hitch rides on deer as the mammals multiply across the country, popping up in forests, parks, and even our front lawns. The phenomena of deer in more places and in ever-increasing proximity to people is, I think, the largest factor affecting the ticks-in-more-places trend,” said Mather, who calls springtime ‘almost a perfect storm’ for ticks.”

The growing deer presence in NJ has already led to serious issues, including Lyme disease and other diseases in humans and animals, car collisions, and millions of dollars in losses from crop/landscape damage.

Sherryl explains, “Deer are meant to be out in the forest and, unfortunately, when builders constructed homes around forty years ago, there was no plan to remove the deer and relocate them. We have an imbalance in our ecosystem. When we built our house in Eatontown thirty years ago, we only saw a couple of deer every few months. Now we see herds of 12 to 14 deer weekly. They are starving and eat up everything on our properties.”

The current deer spraying services and other deterrents are ineffective in preventing deer from ravaging homeowners’ gardens and lawns.

A November 2020 video illustrates the two challenges. Hillsboro, NJ was the leading township in deer collision for 2017. Gene Huntington, a wildlife habitat consultant and founder of Steward Green (which offers consulting services for issues of wildlife habitat and conservation projects), studies deer densities data annually. Last year, the data showed that nine counties in NJ, including Monmouth County, had 150 deer per square mile. Ecologists prefer to see between 15 and 20, which is a healthy density level. Huntington explains that this presents a challenge for our ecosystem. If we do not have biodiversity in the forest ecology, we will not have the habitat to sustain ground nesting birds. Those birds eat ticks and ticks cause Lyme Disease. So, we see it is all connected.

Deer mating season (October through December) means more car crashes. Be on the lookout during this time.

Successful solutions must encompass education, reporting of Lyme disease diagnoses and sightings of both ticks and deer, as well as preventative measures. Our residents must collaborate to educate our community as described below.

It is crucial for us to understand and prevent tick bites. We need to be aware of them and know where we can encounter ticks. Online maps exist that show tick activity in different regions and can help identify the risk where you live.

Get educated about tick bites and how to avoid them and other diseases caused by infectious ticks. Dr. Ilias, an expert in Lyme Disease Research, says it is important to prevent ticks from coming into contact with your skin.

Stay calm if you find a tick on yourself or on your loved ones. It typically takes 36 hours for the bacteria that causes Lyme disease to travel from the tick gut to its salivary glands and into the host. Dr. Ribeiro, an expert in Vector Biology Research, cautions that it is key to remove the tick properly with appropriate forceps such as tweezers. “Grab the whole tick and pull it out.”

New Jersey doctors are required to report a Lyme disease diagnosis to the local health department within twenty-four hours. Unfortunately, Sherryl explained, Lyme disease often remains undetected through certain time sensitive blood work. How does this happen? The CDC guidelines limit the Lyme disease testing to two particular strains of the illness although there are remarkably many more strains.

Another app allows you to take a picture of a tick and send it for identification. Check out TickCheck Tick Testing – For Lyme & Tick-Borne Disease https://www.tickcheck.com/. It determines if your tick carries pathogens that cause Lyme and other tick-borne diseases.

How to Protect Yourself from Ticks

Governmental agencies have joined to create programs on both a national and regional basis to collect tick infection disease data.

In addition, consultants like Huntington study deer densities and universities and government agencies such as Rutgers publish the related data.

The New Jersey Division of Fish and Wildlife recently created The Deer Project to address the deer infestation resulting from the lack of natural predators of deer in NJ. Their goal is to correct the problem in a humane manner. If our communities collaborate, we can collectively report our information (positive medical diagnoses and results, deer sightings, damaged property, and more) and receive the agency’s assistance in our area.

Please contact Sherryl Bouganim with any questions or feedback at sherryl@betesh.us or call 732-245-9550.

Ellen Geller Kamaras, CPA/MBA, is an International Coach Federation (ICF) Associate Certified Coach. Her coaching specialties include life, career, and dating coaching. Ellen works part-time as an entitlement specialist at Ohel Children’s Home and Family Services. She can be contacted at ellen@lifecoachellen.com (www.lifecoachellen.com).