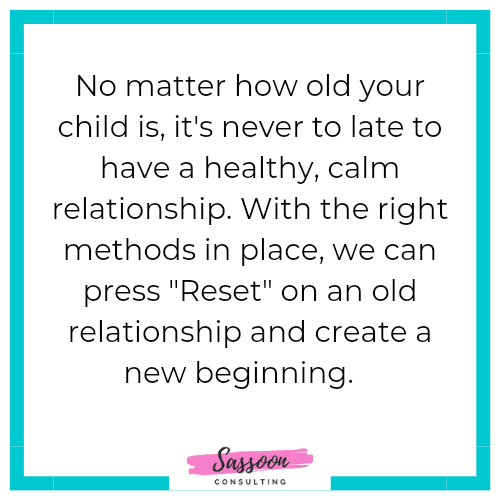 “Every person is created by Hashem with unique potential, purpose, and contributions to make. Every life experience is designed as an opportunity to become greater.

I was excited to meet Tammy Sassoon, whose columns serve as a guiding light for many community parents. Tammy’s popular Positive Parenting column in Community Magazine provides parents with valuable, practical tools.

Let’s travel back in time to Tammy’s childhood and teenage years and follow her journey from teacher to parent coach and educational consultant.

Tammy and her older brother were born and raised in Brooklyn. Her father, Yaakov Zaga, is from Anteb, a town on the border of Turkey and Syria. He moved to Israel when he was five. After serving in the Israeli army, Yaakov traveled to New York and met his bashert, Miriam Liffman. An Ashkenazi Jew of German descent, Miriam grew up in Washington Heights and speaks fluent German.

Educated at Yeshivah of Flatbush from elementary school through high school, Tammy called herself a “an average student.” “I had no interest in sitting at a desk and studying. However, I did pick up my strong work ethic in high school and from my parents. My parents are wonderful role models and I so appreciate the life lessons they taught me. They raised us to always try our best. We weren’t afraid of hard work and pushed to figure things out.”

When asked what kind of child she was, Tammy replied, “I was very outgoing with tons of energy. I specifically remember that wherever I went, people used to often ask me to ‘please slow down, or to be quiet.’ That’s why, as a young adult, I became passionate about working with difficult children. I understood that I, too, was born with potential and with contributions to make as Hashem envisioned.”

Tammy had her “aha moment” as a camp counselor. She began to combine her own childhood experiences with her adult critical thinking skills. Her epiphany was that children who are viewed as difficult or disruptive shut down when they are often just told to be quiet or to slow down. That’s why she believes in bringing out their potential, while also telling children in a non-judgmental way, “I am holding you accountable for your actions because I believe in you.”

“Every human being is unique and created by design by Hashem, with unique potential, purpose, and qualities and contributions to offer, regardless of what stage of life they are in. We also each have unique gifts and challenges, and every challenge is an opportunity for growth.”

Today, as an ardent believer that Hashem created every person with a unique ability to make the world a better place, Tammy comes across as warm, caring, lively, quick, and solution oriented.

After high school, Tammy enrolled at Brooklyn College and majored in Math Education. She graduated in three-and-a-half years, energized to start teaching. Since it was the middle of the school year, there were not many job openings, but she did hear about a position as a Special Education teacher at P.S. 163. Even without experience in the field, Tammy was up for the challenge, and immersed herself in her new class of twelve students.

Moved by how much progress students with special needs can make if teachers believe in them, Tammy headed back to the classroom as a student again, studying for a Master of Science in Special Education at Brooklyn College.

Two years later, Tammy was offered a position at Gesher Yehuda. Though she was really enjoying her public school teaching position, she decided to start teaching children in our own community.

Tammy taught grades three, five, six, and seven, and became a social skills trainer at Gesher Yehuda over the course of her ten years there. She also began to build her private practice as a behavioral therapist, which later evolved into her parent coaching practice when Tammy realized that the results are much more transformative when parents do the work. She started seeing parents one-on-one and giving parenting courses.

Tammy found that no matter how difficult a child is, parents can experience significant results when they use specific methods to highlight their children’s strengths and purpose, while setting effective limits.

In her early twenties, Tammy went to Israel to study for four months at Neve Yerushalayim College. Although she had a solid Jewish foundation, she wanted to expand her knowledge and get her burning questions resolved at Neve. One of the Neve rabbis was Rabbi Lawrence Kelemen, author of To Kindle a Soul.

It was hashgachat pratit that Tammy met her naseeb two years later through Rabbi Kelemen. On a phone call to Israel, he asked Tammy if she would like to meet a young

man he had recently connected with, David Sassoon. Rabbi Kelemen said that although he only met David for a five minutes, he saw a passion for truth and extreme kindness in David. Tammy decided to spend her winter break in Israel and greatly enjoyed her outings with David. David had studied at Mikdash Melech and at Mir Yerushalayim. “I had clarity when I was with David and realized we had the same goals.”

They were married four months later and spent their first year of marriage in Israel. While David was in yeshiva, Tammy taught English at a girl’s school in Har Nof.

Hashem blessed the couple with four boys and then a girl. “I was 28 when I married David and we were so grateful that we had our first son a year later. I remember being shocked at how hard it was to mother a baby. But I also knew that wherever there is a challenge, there is potential for growth, and Hashem always gives the tools. We had five children in nine years, and they are of the greatest gifts in our life.”

After one of her workshops at Orot Sarah, a Sephardic Bet Yaakov school, Mrs. Renelle Maslaton asked Tammy to interview for an assistant principal position. Tammy hesitated to consider the job, as she had four children, and two were babies. “It was love at first sight. Mrs. Maslaton and I had the same vision and ideas about education and growing each individual student. I followed my heart and took the position. Together we built a social and emotional wellness program and created a culture that was part of the curriculum.”

Now Tammy teaches that curriculum in many schools.

Tammy’s premise is that every child can be kind to others. By combining a culture of warmth and kindness with limit setting and accountability, Tammy found that in a few weeks, any classroom or home can go from being in upside-down mode to functioning as a healthy environment. “We can help even the most disruptive child thrive within the context of respecting people.”

This spotlights what is unique about Tammy’s parenting approach and her life perspective.

Do you remember Tammy’s “aha moment” that we are all created by Hashem with our special spark and potential?

Tammy’s distinctive methodology is about empowering moms of defiant children to turn a chaotic home into a calm one. Drawing on her own parenting tools, training, research, coaching, and experience as a principal, Tammy guides parents to use and develop their inner resources to help their children develop healthy self-esteem and behavior.

After what Tammy describes as seven beautiful years in Orot Sarah, she recently stepped down from her principal role to focus on her coaching practice:

· A to Z Parenting Academy, an online independent program.

· Lives courses (Zoom too) three times a year, including a crash course on emotional detox.

· Coaching principals and teachers, towards creating a school and classroom culture of kindness, motivation, and making contributions.

A short time ago, Tammy introduced a safe parenting series with a marriage component. “It’s crucial to work on one’s marriage even before parenting. Kids need healthy modeling from their parents. When women demonstrate respect for their husbands instead of judgment, husbands are free to be their best selves. They want to see their wives happy.”

Tammy is passionate about her family and delights in doing home decorating projects with her children such as painting and building. To unwind, she loves needlepointing, walking and taking in the fresh air, and reading books on perfecting one’s nature.