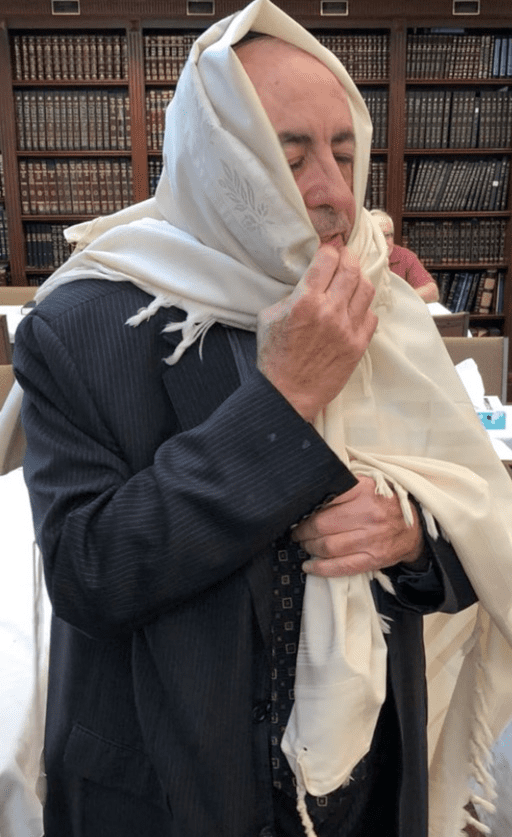 On 6 Adar I (February 7), our community and the Jewish word lost a Torah giant, a father and a leader, a figure who had served as the last link to the sages of previous generations.

Hacham Elie Khalife was the grandson of the famous kabbalist Hacham Nissim Indibo, Chief Rabbi of Damascus and head of the city’s Bet Din. (Hacham Nissim, a disciple of the illustrious kabbalist Hacham Yitzhak Abulafia, was the rabbi who accompanied the Israeli spy Ellie Cohen during his final moments before his execution by the Syrian authorities, reciting vidui (confession) with him.) Tragically, Hacham Elie lost his father when he was just three years old, and his esteemed grandfather became his mentor and guide. He lived in his grandfather’s house, which was near the Shevet Ahim synagogue. Every night, young Elie would join his grandfather in the El Atiq bet midrash where they would study Zohar and Hok LeYisrael, and recite Tikkun Hatzot.

Already at a young age, Hacham Elie exhibited a fierce passion for learning. He mastered all areas of Torah, including Kabbalah, the study of which flourished in Damascus during this period. He studied shehitah (the laws of slaughtering animals to produce kosher meat) under Hacham Yitzhak Assa. He also learned to be a mohel, a hazzan, and a ba’al koreh, and blew the shofar.

After Hacham Nissim’s passing, Hacham Ellie succeeded his grandfather as the city’s Chief Rabbi. People of all backgrounds – Jews and non-Jews alike, including government officials – flocked to him to receive his blessings.

The hacham devoted himself tirelessly and selflessly to the needs of Syria’s Jews. He would travel by bus to Aleppo to perform a berit, refusing compensation. He would even travel to the town of Kamishle, near the Turkish border, to perform shehitah and tend to the needs of the community.

As a child, I had the great privilege of praying with Hacham Elie every Shabbat in the Kitab El Dewer synagogue. He would arrive an hour-and-a-half early in order to prepare and recite the introductory Patah Eliyahu prayer. I, along with several others, took this opportunity to learn with the rabbi, and he joyfully taught us without ever asking for any renumeration.

“Come Before Him With Song”

“Serve Gd with joy, come before Him with song” (Tehillim 100:2 ). Nobody embodied this verse better than Hacham Elie. He exuded palpable, contagious joy in the service of Hashem. As a gifted hazzan, he loved singing and hearing other hazzanim sing praises to Gd.

Through his example, leadership and inspiration, the synagogue produced numerous scholars, hazzanim, ba’aleh koreh, and shofar blowers. The joy and enthusiasm with which he performed each and every mitzvah inspired others to want to emulate him.

During his final moments of life, I was with his sons at his bedside in the hospital, reciting Tehillim, and I began singing the hacham’s favorite song – Lichvod Hemdat Levavi, a song sung in honor of the great prophet, Eliyahu. The rabbi sang this song countless times, every time he performed a berit. Although he was in a coma, his left eye opened as we sang. Even in his state of physical incapacitation, his soul was enjoying the beautiful song of praise for Eliyahu.

The hacham’s humility was extraordinary, and almost hard to believe. In his own synagogue, which he led, he sat in the back. He dressed simply, just like an ordinary layman, except on Shabbat. His wife once suggested that he wear a tie and suit, but he said he preferred dressing like everybody else. He would get around the city by bicycle, often with a chicken in the back for a poor family. He performed an extraordinary amount of hesed, helping so many widows, orphans and other people in need, without anybody knowing. The hacham gave the appearance of a simple, ordinary Jew, concealing his outstanding piety and scholarship.

Rabbis would often ask him to write kamiot (amulets) for people who needed assistance. The hacham would comply, but he always requested that the rabbis never reveal the source of the kamiot, so nobody would attribute them to him.

He treated all people – scholar and layman, rich and poor, young and old – with great respect, but refused to accept honor from others. At my wedding, I needed to leave the huppah in order to bring Hacham Elie to stand together with the other rabbis. If he was invited to a hanukat habayit, and there was another rabbi present, he would insist that the other rabbi receive all the honor, while he sat and read the text quietly.

Of course, his efforts to conceal his greatness ultimately proved unsuccessful. As an outstanding scholar, produced by a generation of Torah giants, his stature was recognized and appreciated by all. One year, during kapparot before Yom Kippur, I approached a group of hassidic Jews who had come to do kapparot with Hacham Elie, and I asked them why they came to the hacham, instead of doing kapparot with their own rabbis.  They explained that they looked forward to this the entire year, because everything Hacham Elie did followed the wisdom of kabbalistic tradition.

At the hacham’s funeral, 3,000 people of all different backgrounds – Sepharadim, Ashkenazim, hasidim, children, and adults – assembled on a cold, dreary, rainy day to pay their respects – testifying to the remarkably wide array of Jews whose lives he touched, and for whom he provided great inspiration.

“It’s the Creator of the World!”

People flocked to the hacham’s house for his blessings, which helped so many people overcome so many hardships. They would come and pour their hearts out before him, and he graciously blessed them. Even when he himself was dealing with his own difficult medical conditions, he listened attentively and patiently to everybody who came to him, felt their pain, expressed his genuine concern, and offered a heartfelt prayer on their behalf. He was famous for placing his large hands over the people’s heads and forcing their heads downward, indicating that one must humble himself in order to receive blessing. No matter what kind of hardship the person was experiencing, the hacham assured him that his Father in heaven is capable of changing any situation and resolving any problem. Indeed, there were occasions when the situation seemed hopeless, and even when doctors determined that a patient could not be cured, but Gd listened to Hacham Elie’s prayers and rescued the person in need.

His blessings and prayers wrought miracles for so many people. Whenever somebody would thank Hacham Elie for his blessing which helped them, he would point his finger to the sky and say, “It’s the Creator of the world! The Almighty is the one to whom we owe such immense gratitude! He is the one who deserve our praises and appreciation!”

The Joy of Serving Hashem

The hacham endured a great deal of hardship throughout his life. His father, as mentioned, died during his childhood. He lost his wife and lived alone for many years. He suffered from poor health, underwent many surgeries, and experienced a great amount of pain. And yet, despite all his personal suffering, he focused not on his own problems, but rather on Am Yisrael. He was always concerned about his fellow Jew in distress, and not about himself.

Hacham Elie’s greatest joy was helping other people and serving Hashem. He never went on vacation, because he felt no need to take a break from what he was doing and go away. He experienced happiness through the kindness he extended to other people, and through the mitzvot he performed. He did not need anything else.

He also found joy in all the simple blessings of life. He rejoiced every time it rained, particularly when rain fell on Friday night. He found it foolish that most people complain about the rain and how it “ruins” their day. For him, rainfall is an expression of Hashem literally showering the earth with His abundant blessings.

Rabbi Khalife has left us, but consistent with his limitless care and concern for the Jewish people, he ensured to leave behind his two sons, Rabbi David Khalife and Rabbi Rahamim Khalife, both of whom, inspired by his greatness and guided by his teachings, are outstanding scholars and role models. Like their father and great-grandfather, they devote themselves tirelessly to Torah study, and observe Tikkun Hatzot each night from midnight until the early dawn hours, sitting in ashes and mourning the destruction of the Bet Hamikdash. They then spend their entire day learning and teaching Torah.

Hacham Elie passed away on 6 Adar – the day before 7 Adar, the yahrtzeit of Moshe Rabbenu. Like Moshe Rabbenu, he, too, was a teacher who communicated the Torah to his people, and a loyal shepherd who tended to his flock with unbridled love and selfless commitment. And just as Moshe Rabbenu continues to live through our loyal study and observance of the Torah he gave us, so will Hacham Elie continue to live through our perpetuation of his precious legacy of Torah, hesed and true joy in the service of Gd