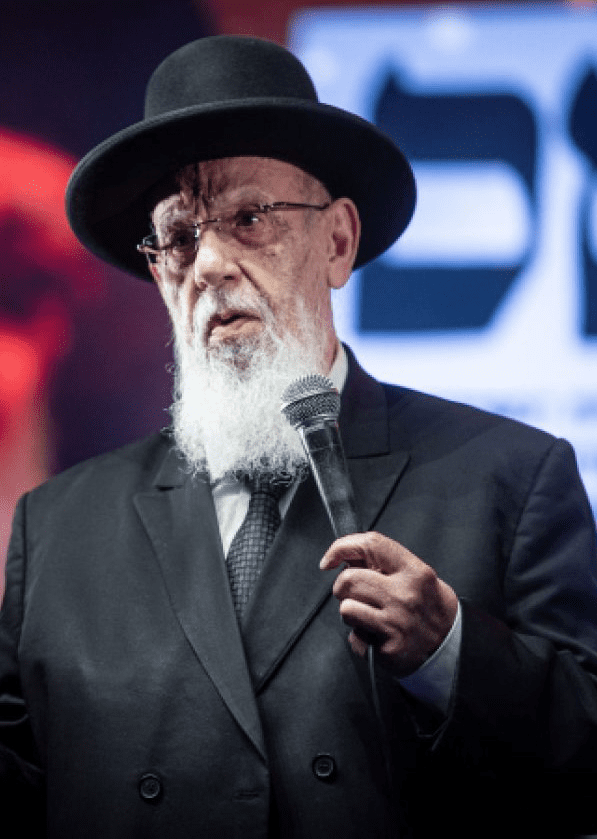 Shortly before press time, the news broke of the passing of Hacham Shalom Cohen, one of the leading Torah figures of the Sephardic world. Hacham Shalom devoted his life to the Jewish People, as a Torah scholar, halachic decisor, educator, Rosh Yeshiva, mentor to thousands, and spiritual guide of the Shas party. Unfortunately, time did not allow for a comprehensive tribute to Hacham Shalom in this month’s issue of Community. Please Gd, more thorough coverage of the rabbi’s life, accomplishments and teachings will appear in our October issue.

The funeral procession began at 2pm from the renowned Porat Yosef Yeshiva in Jerusalem’s Geula section, which Rav Cohen led for the past eight years. Tens of thousands of people escorted the Torah giant and revered spiritual guide to his final resting place in the Sanhedria cemetery.

“He cared about the nation of Israel his entire life,” said Rabbi Yaakov Cohen of his late father. “We never heard him say the word ‘me.’ We’re all devastated. Who will lead us now? Who will lead our family?”

Hacham Shalom had been in and out of the hospital over the past year, and was then hospitalized in August for a leg infection. Rabbi Yaakov said that although his beloved father’s health was declining in the weeks and days before his passing, the family had thought that he would recover.

“It was unexpected. We thought we were going to the hospital for a few days and then coming back. But things took an unnatural turn.” Rabbi Yaakov did not provide any additional information about the cause of death.

Rabbi Moshe Tzadka, who led the Porat Yosef Yeshiva alongside Hacham Shalom, spoke at the funeral of how countless people throughout the Jewish world came together to pray for his recovery when the news of the great sage’s deteriorated health got out after the final Shabbat of his life.

“He was a source of light for others,” Rav Tzadka said. “Even on his last day, he was blessed enough to shake the entire world.”

Rabbi Shmuel Betzalel, another leading figure in the prestigious Sephardic yeshiva, described Hacham Shalom as his “close friend for the past 50 years,” who “would light up the darkness with every step he took.” Rabbi Betzalel said that Hacham Shalom “had immense powers of Torah, humility and pure fear of heaven within him… His path was a truthful one.”

“We Cry and Suffer in Shock”

Several prominent religious leaders in the country had called on the public to attend the rabbi’s funeral.

Sephardic Chief Rabbi Hacham Yitzhak Yosef called on all yeshiva students in the country to attend the funeral, despite it being the summer break.

“As a matter of honoring the Torah, everyone must attend [the funeral for Rav Cohen] who taught the Torah to the masses, raised generations of Torah scholars, restored old traditions and rebuilt Sephardic Judaism from the ashes,” Rav Yosef wrote ahead of the event.

“Together with the people of Israel in Israel and abroad, we cry and suffer in shock,” said Ashkenazi Chief Rabbi of Israel David Lau.

“Israel has lost a great man, whose teachings, prayers and blessings protected the nation of Israel for decades,” he added.

Earlier Monday, Shas party chairman Aryeh Deri issued a statement announcing Hacham Shalom’s death, referring to the rabbi as “our father, our teacher and our leader,”  and likening the rabbi’s passing to “a ship losing its captain.”

Hacham Shalom was buried next to his wife and near the resting place of HaGaon Hacham Ovadia Yosef, the former Shas spiritual leader, who died in 2013.

Like his esteemed predecessor, Hacham Shalom led Sephardic Jewry through the turbulent waters of modern-day Israel, carefully navigating his followers through the complex social, religious and political realities of the modern Jewish State. With a blend of outstanding scholarship, wisdom, piety, humility and sensitivity, he taught thousands of students, and provided guidance for the preservation of the glorious Sephardic tradition in today’s world, and for ensuring its successful transmission to the next generation.