Attending the 13th Siyum HaShas in MetLife Stadium is not an easy experience to put into words. And yet, to let the memories fade without capturing them and preserving them would be a missed opportunity. So, I will attempt to convey some of the inspiration I felt in the hopes that it will not be lost, but will continue to touch and motivate us for as long as we can hold on to it.

You might ask why is this event so challenging to portray? The simple answer is because it was a larger than life experience. The 90,000-seat stadium was full of Jews who gathered together for the purpose of celebrating the achievement of thousands of individuals. These individuals span the globe, and have completed the journey through Shas in seven and a half years. Each one of those people undertook the commitment to learn Torah every day without exception, toiled and persevered, and then realized the completion of this monumental task. While this would be a cause for celebration had just one individual reached this milestone, when multiplied by the multitudes who completed learning all of Shas, the celebration became magnified on a universal scale. 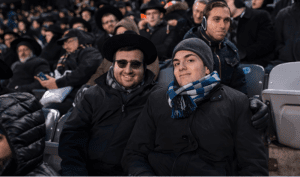 Since the study of gemara is an assignment unique to men, I have neither completed Shas nor learned one masechet. I have not even learned one daf. But the celebration belonged to me in a very real way because I am a member of the Jewish people, whose essence and lifeblood is Torah. The Siyum HaShas was not only a source of joy for the ones who made the siyum. The nation united to proclaim that our identity is Torah. Torah is our happiness, our pride, and our life. That message belongs to every Jew, whether he or she is a member of the Daf Yomi movement or not, and the message of Jewish unity provided by Torah learning is a real reason to rejoice.

To me, the single most inspiring aspect of the Siyum HaShas was the sheer number of people who showed up in the cold in the middle of the day. Attending this event meant either taking time off from work or school or spending a precious vacation day, driving out to MetLife Stadium in East Rutherford, NJ, and sitting outdoors in the cold for hours. Yet the 90,000-seat stadium was not large enough to accommodate everyone who wanted to participate. When the event coordinators saw that the tickets were selling out fast, they opened another venue to hold an additional 30,000 celebrants who did not want to miss the opportunity to be part of the historical event. Because an occasion that acknowledges who we are as a people is not one to ignore.

Upon entering the stadium, one felt the anticipation and energy palpably. Men, women, and children of all ages and all walks of life were coming together for a bonding celebration that would serve to unite us all. Every mesayem was completing the same Talmud, at the same time, in the same place. After R’ Shmuel Kamenetzky completed the last few lines of the last masechet and recited the Hadran prayer with deep emotion, the entire stadium erupted in exultant singing and dancing. From the rabbis on the dais to the attendees on the floor and throughout the stands, there was a genuine, pulsating exhilaration that fused everyone together and made everyone feel part of a larger whole. Live hookups to locations all over the world were projected on screens, which showed Jews dancing and celebrating the siyum.. Everywhere there was dancing of triumph, of pride, and of unity.

It was also a testament to the survival of our nation. Although we have been persecuted and attacked throughout the generations, we are very much alive. Not just alive in body, but alive in spirit and soul. Interviews were shown with Holocaust survivors expressing their wonder at the vibrancy of the Jewish people, who have experienced the worst suffering but have prevailed and rebuilt Torah all over the world. The fact that we as a nation have reached this milestone is nothing short of miraculous.

A Deep Feeling of Connection 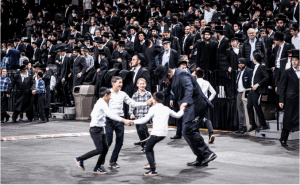 The program continued into the evening and culminated with thousands of Jews praying Arbit together. There was deep intensity as they loudly proclaimed Shema Yisrael together and answered Kaddish as one entity. But when everyone stood up and prayed the silent Amidah, the silence was deep and profound, as each participant connected with the Creator of the world on his own personal level.

And that was really the theme of the day. That each individual has a distinct role to play in the structure of our people, and that the whole is greater than the sum of its parts. The accomplishments of an individual are exponentially more valuable when combined with the achievements of many, many others who are all carrying out the will of the same Father and who are following the principles of the same Torah. When we reach that awareness and that goal, it is indeed a cause for a celebration on the scale of the Siyum HaShas.