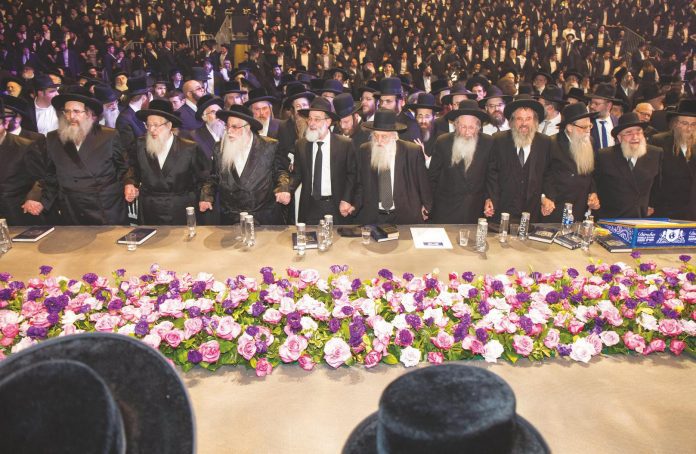 Over 22,000 Join Leading Rabbis in Celebrating the Dirshu World Siyum in Newark

It was an unforgettable moment when the Sanzer Rebbe, shlita, who had flown in from Israel, entered the cavernous Prudential Center in Newark on 15 Shevat (February 9).

Dry ink on paper cannot even come close to capturing the powerful emotions that were felt that night in the Prudential Center and at NJPAC, where thousands more had gathered, joined by over 100,000 worldwide via livestream. These venues, which normally host sport competitions and other entertainment events, were transformed into one giant study hall and a dazzling display kavod haTorah (respect for the Torah).

That moment, and so many others that night, truly signified the essence of Dirshu. After all, what is the essence of Dirshu, if not Torah, Torah and more Torah, led and guided by the leading sages of the generation, and unity among all the various streams – as powerfully expressed through the assembly of sages representing the many different groups of Am Yisrael to honor the outstanding accomplishments of Dirshu’s students, who have intensively studied, repeatedly reviewed, and successfully mastered the entire Talmud.

All the speakers hailed the accomplishments of the participants of Dirshu’s numerous study programs, as well as he organization itself, which has helped countless men achieve remarkable diligence and extensive knowledge. And they emphasized that Dirshu’s system of ensuring accountability in the study of Torah is the most effective antidote we have against the formidable spiritual challenges that our nation faces, especially in our generation.

This message was powerfully encapsulated by the pronouncement passionately exclaimed by Rav Dovid Hofstedter, shlita, Nasi of Dirshu: “Tonight, at this great simcha, we sound the battle cry, ‘Mi L’Hashem Eilai’” – echoing Moshe’s cry after the sin of the golden calf, “Whoever is loyal to Gd – come to me!” But whereas at that time it was the people of the tribe of Levi who gathered around Moshe, Rav Hofstedter announced that in our generation, “Vayeiasefu elav kol beneh Dirshu” – it is the Dirshu participants who have assembled to resist the sinful trends of our generation.

The overwhelming joy pulsating through the crowd in the Prudential Center and NJPAC was felt also by the participants in the special women’s event held at the Newark Symphony Hall, who celebrated their husbands’ accomplishments as well as their crucial role in enabling their husbands to reach this spectacular milestone.

The Seeds of Rav Meir Shapiro

HaGaon HaRav Shimon Galei, a prominent lecturer and Rosh Kollel from Israel, led the assemblage in the recitation of Tehillim and delivered heartfelt words of blessing to the participants.  His remarks were followed by a special video presentation featuring two of the leading Sephardic rabbis in Israel – HaGaon HaRav Shalom Cohen, shlita, Rosh Yeshiva of Yeshiva Porat Yosef; and HaGaon HaRav Shimon Baadani, shlita, Rosh Yeshiva of Torah VeHaim. These great leaders blessed the participants and urged all Jews across the world to raise their standards of Torah learning by joining programs that encourage review through testing.

“It is clear that Dirshu has done amazing things regarding the learning of Daf HaYomi, and all of Shas,” Rav Baadani exclaimed. “They have focused on making sure that the person learns the entire masechet in a way that it becomes his own, it belongs to him!”

Hacham Shalom Cohen cited the verse in the Book of Malachi (3:18), “Then you shall again discern between the righteous and the wicked, between he who serves Gd and he who does not serve Him.” The Gemara (Hagigah 9b) explains that the terms “righteous” and “he who serves Gd” in this verse both refer to pious people who study Torah – but there is a distinction between the two.  One refers to a student who reviews the material 100 times, and the other refers to somebody who reviews the material 101 times. This means, the Hacham noted, that even if one reviewed 100 times, it is only when he reviews the material yet again that he earns the special distinction of being called a “servant of Gd.”

“This is what Dirshu is trying to do!” Hacham Shalom said, adding, “I want to bless everyone that they all become ovdeh Elokim – people who truly serve Hashem!”

At Prudential, the participants were treated to a moving speech by HaGaon HaRav Aharon Toisig, shlita, Mashgiach at the Alexander Yeshiva of Bnei Brak, who traveled from Israel especially for the event. He reflected on the extraordinary figure of Rav Meir Shapiro, the founder of the Daf Yomi learning program:

“Rav Meir Shapiro, the founder of Daf HaYomi, came to America in the 1920s to raise funds to build his ‘baby,’ Yeshivas Chachmei Lublin. He had a very hard time raising funds and, after spending more than a year in America, returned to Europe very disheartened. Imagine the nachas [pride] he would have to see that the Daf HaYomi has been so successful, and so many thousands are learning and being tested on Shas, due to the seeds that he planted!”

Rav Dovid Cohen explained why the joy of a Dirshu siyum is so special:

“When I come to a siyum such as this, I feel that it is something special and unique. Any siyum haShas is a tremendous simcha [joyful celebration]. We should not minimize the completion of Shas by anyone. Nevertheless, when a person doesn’t just learn Shas, but reviews it over and over again, that is the ultimate siyum. Dirshu makes such siyumim. Dirshu Yidden [Jews] not only learn Shas, they know Shas!”

The Rosh Yeshiva of Lakewood, Rav Yeruchem Olshin, told the audience that Dirshu provides an antidote to the unique dangers of our current exile:

“We are living in difficult times. Anti-Semitism…has come to locales where it wasn’t so strong until now, such as Jersey City, Monsey and others… There is the spiritual exile, as well. Rav Elchonon Wasserman wrote that the reason for all travails that Klal Yisrael [the Jewish Nation] is undergoing is forgetting the Torah… Dirshu is preserving Klal Yisrael in this exile by giving us the great weapon and shield to combat the forgetting of Torah!”

Rav Yeruchem then addressed the wives of the Dirshu participants, noting that before the giving of the Torah at Mount Sinai, Gd instructed Moshe to first speak to the women about their obligations, before speaking to the men. Rabbenu Yonah, in an essay he wrote especially for women (printed in his famous work, Iggeret Hateshuvah), explains that Moshe was to speak to the women first because men are successful in Torah study as a result of the modesty of the women. Their fierce love of Torah, Rav Olshin said, “is the power behind their husbands and empowers their husbands and children to learn.”

Chairman Rabbi Leibish Lish related a story which occurred that very morning in the school where he teaches. He saw a boy come to school with a white shirt, a shirt worn on festive occasions such as Rosh Chodesh, and he asked the boy why he was wearing a white shirt.

“My father does Dirshu,” the boy explained.

“There is Only One Solution”

A palpable feeling of awe and reverence filled the air as the Sanzer Rebbe slowly made his way to the podium. He spoke to the crowd with obvious love and passion, and the audience listened attentively, latching onto his every word.

The Rebbe said that his father frequently cited the Sages’ remark that Jews will be redeemed through the merit of Torah study, and he then emphasized how desperately the Jewish People need redemption.

“The situation that Klal Yisrael is facing today throughout the world is terrible. In the Land of Israel, different nations want to devour us. Outside the land, it is not much better. It has even reached American shores. Even worse is the spiritual exile. Our youth are being destroyed by the filth of the street that is infiltrating in various ways…

“There is only one solution, only one cure – Torah learning… Yes, in our generation, there is so much impurity, but there is also Dirshu!”

HaGaon HaRav Reuven Feinstein, shlita, Rosh Yeshiva of the Yeshiva of Staten Island, was then honored with reciting the traditional Hadran text, marking the completion of the entire Shas.

Over at NJPAC, HaGaon HaRav Shlomo Feivel Schustal, shlita, Rosh Yeshiva of Yeshiva Tiferes Yerachmiel, discussed the special significance of participating in a siyum. He cited the teaching of Rav Chaim of Volozhin, in his famous work Nefesh Hachaim, that anytime one performs a mitzvah, he creates great sanctity in the heavens, which brings him Gd’s special assistance. This is especially so upon the completion of a mitzvah, at which point the person is enveloped by holiness, raising him to an exalted spiritual level. The Nefesh Hachaim says that this experience resembles life in Gan Eden.

“Now,” Rav Schustal passionately cried, “when we are all here at the completion of this great mitzvah of completing Shas, it is as if we are in Gan Eden!”

The Skverer Dayan, HaGaon HaRav Yechiel Steinmetz, shlita, was honored with beginning the new cycle of Shas with the learning of the beginning of Masechet Berachot, the first tractate of the Talmud.

At the Prudential Center, Rabbi Lish introduced the Nasi of Dirshu, Rav Dovid Hofstedter, who spoke of the challenge of experiencing the unparalleled joy and “sweetness” of Torah study. Rav Hofstedter drew upon the story told in the Book of Shemot of when Beneh Yisrael arrived in Marah, and were unable to drink the water at that location, because it tasted bitter. The Nsai noted the profound significance of this story for us, and our approach to Torah study.

“The Midrash says that they couldn’t taste sweetness in the water because their deeds were bitter. The only way to cure such bitterness is through putting something sweet into the water, by immersing themselves in the sweet waters of Torah.

“In some way, we are all like that. When we start learning Torah on a low level, we often cannot taste the sweetness of Torah. Through our ameilus [exertion], we elevate ourselves so we can taste the increasing sweetness of the water of Torah.

“In our generation, there are so many tools to clarify and elucidate the Torah. The tools may have changed, but…the ultimate purpose of learning is and has always been ameilus, yegias haTorah [toiling in Torah] and kabbalas ol Torah [accepting the yoke of Torah]. If we use these tools just to make our lives easier, we won’t taste those sweet waters.

“We are being attacked in many ways. Everything that is good and right, dignified, virtuous and proper is under attack. Yiddishkeit [Judaism] and Torah are under attack. We are at war. but we must fight back…

The formal “kabbalat ol malkhut Shamayim” – proclamation of commitment to Gd’s Kingship – was led by the Vizhnitzer Rebbe, shlita, of Monsey, and was followed by a beautiful musical interlude in festive celebration of this momentous occasion.

HaGaon HaRav Elya Ber Wachtfogel, shlita, was honored with starting the new cycle of Shas study. He began by saying, “When a person constantly reviews vast amounts of Torah, it becomes his essence. That is what learning with Dirshu does. Superficial learning of a page of Gemara does not give you that koach [strength]. But learning and reviewing with accountability can enable everyone to know the entire Torah!”

As the music began to play with all the various singers and bands joining together in unbridled unity, the entire assemblage erupted in song and dance. The Torah sages at the dais held hands and danced together, and all those who had completed the Shas were invited down to the floor of the Prudential Center to dance with them.

As the circle went around and around, the feelings of joy, of true Torah accomplishment, were simply indescribable. It was the special, unparalleled joy of Torah – a feeling which nobody who experienced it that night will ever forget.