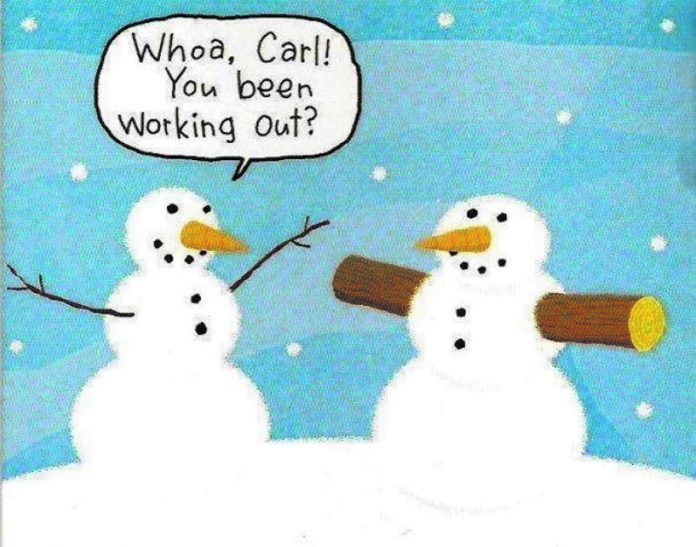 Q: Why shouldn’t you tell a joke while you’re skating?

What My Grandfather Did

A poor man walks into an inn and demands that the innkeeper give him some meat.

“How do you plan to pay for it?” the innkeeper asks.

“Well I should tell you now that I don’t have any money,” the poor man says.

“No money? Get out of my inn!” yells the innkeeper.

“Oh, no!” the poor man yells back. “If I don’t get what I asked for, I’ll do what my grandfather did when he wasn’t served!”

Frightened by the threat, the innkeeper quickly gets him the food that he asked for.

Then, the poor man asks for wine.

“But you told me you don’t have any money!” says the innkeeper.

“I already told you, if I don’t get what I asked for, I’ll do what my grandfather did when he wasn’t served!” the poor man shouts back.

As the poor man is leaving after finishing his meal, the innkeeper asks him, “Excuse me, I am very curious, what exactly did your grandfather do when he wasn’t served?”

Jennifer: I signed up for an exercise class yesterday, but I think it’s a big joke.

Jennifer: Well for one thing they asked me to come wearing loose-fitting clothing.

Sharon: So. What’s wrong with that?

Jennifer: Well obviously, if I had any loose-fitting clothing, I wouldn’t have needed to sign up in the first place!

Alice decided enough was enough – she was going to join a gym and start getting in shape. She joined an aerobics class and the instructor had everyone lie on their backs with their legs up as if pedaling a bike. After several minutes, Alice suddenly stopped.

“Why did you stop pedaling?” the instructor shouted to Alice.

Moishe and his friend Heshy went out for lunch together every Tuesday. One Tuesday, Moishe wrestled with the problem of whether or not to butter his bread.

“I like butter on my bread,” he said. “But my diet strictly forbids butter. Maybe I should call Miriam and ask her what to do.”

“Moishe,” Heshy said, “don’t be ridiculous. You’re a grown man. You should be able to decide, without your wife’s help, whether or not to butter your own bread.”

When the waiter arrived with the check, Heshy pointed to Moishe and said, “He’s paying.”

“What?” Moishe said. “Why should I have to pay the whole bill?”

“Because if you don’t,” Heshy said, “I’ll tell Miriam about the butter.”

Customer: “My name is Steven Harrison. What’s your name?” Operator: “Sorry sir, we’re not allowed to give our names, but my operator number is 2055.” Customer: [disappointed] “So may I call you by your first digit, or would that be too personal?”

The manager of a large office noticed a new man one day and told him to come into his office. “What’s your name?” he asked the new guy.

The manager scowled, “Look, I don’t know what kind of a namby-pamby place you worked at before, but I don’t call anyone by their first name. It breeds familiarity and that leads to a breakdown in authority. I refer to my employees by their last name only: Smith, Jones, Baker…that’s all. And I am to be referred to only as Mr. Robertson. Now that we got that straight, what is your last name?”

The new guy sighed, “Darling. My name is Abe Darling.”

“Okay Abe, the next thing I want to tell you is…”

Brenda had to leave the house for a few hours so she asked her husband Saul to watch their new baby, Jack. Since it was going to be the first time Saul ever cared for the baby, Brenda carefully explained to him how to feed him if he’s hungry and burp him after he eats. She also left him a brand new box of diapers and baby wipes.

When she returned a few hours later, Saul bragged about how easy it was.

“This parenting stuff is really a piece of cake. I don’t know why everyone makes such a big deal. The only problem is that the baby smells a little,” he said.

Brenda picks up the baby and notices that his diaper is very full and the box of diapers remained unopened.

“Why didn’t you change his diaper?” Brenda demanded.

The Thing in the Garden

Mousa, an elderly Arab man, decided one day that he would like to plant potatoes in the large garden behind his house in Brooklyn. But being that he was alone and in his seventies, he realized that he was in no shape to do any serious gardening. He decided to ask his son Ahmed, who was living in Egypt, for advice on what to do. The old man sent an email explaining the problem: “Son, I am very sad because I can’t plant potatoes in my garden. I am sure, if only you were here, you would help and dig up the garden for me. Regards, Your Father”

The following day, the old man receives a response email from his son: “Father, Whatever you do, don’t touch the garden. It is there that I have hidden the ‘THING.’ All the best, Ahmed”

Within hours of receiving the email, a troop of engineers from the Army, Marines, FBI, and CIA descend on the house. After securing the perimeter, they unearth the whole garden, searching every inch and turning over every stone. After hours of searching, they leave disappointed, not having found anything.

The next day, the old man receives another email from his son. “Father, I hope the garden is dug up by now and you can plant your potatoes. That’s all I could do for you from here. Regards, Ahmed”

And the Winner Is…

David won a toy at a raffle. He called his five kids together to ask which one should have the present.

“Who is the most obedient?” he asked. “Who never talks back to Mommy? Who does everything she says?”