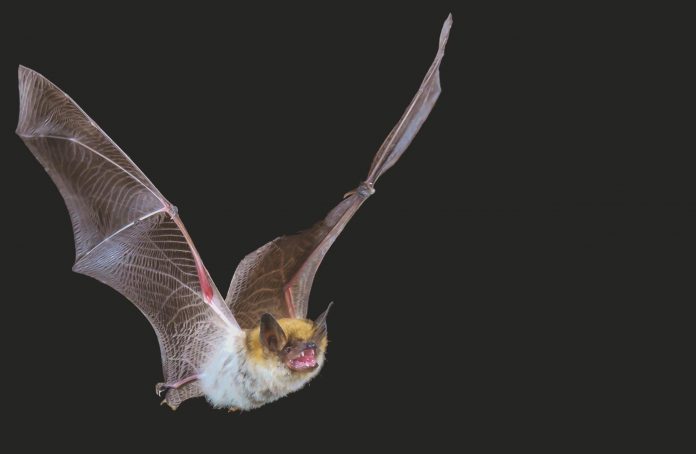 Bats are small, winged mammals that are very active at night; you can say that they are the nocturnal masters of the sky! They mainly fly and hunt for prey at night, and then rest during the day.

To protect themselves from predators, bats usually choose a secluded place to sleep during the day, such as caves, old buildings, barns, under bridges, and inside of hollowed-out trees. Bats have a very unique method of sleeping: they hang upside down from their feet! This is known as roosting.

The main reason why bats sleep this way is because it places them in the perfect position for takeoff. Unlike birds, bats can’t launch into the air from the ground. Their wings don’t produce enough lift to take off from a dead stop, and their legs are not strong enough to run and gain the speed necessary for lift-off. Instead, bats use their front hooked claws to climb to a high spot, and from there they can fall into flight. By sleeping upside down in a high location, they are ready to spread their wings and fly off immediately if they need to escape any danger.

Contrary to popular belief, bats are not blind. In fact, they have very good eyesight and can see rather well!

How Bats Are Able to Sleep Upside Down 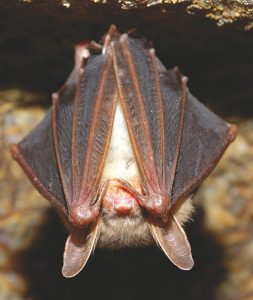 You might wonder how it is possible for a bat to sleep upside down. To us that would seem uncomfortable and tiring, not to mention very daring, yet the bat is perfectly fine sleeping this way!

The bat’s body was specially designed to hang upside down effortlessly. Much of this has to do with the way the claws of its toes work. If you want to clench your fist around an object such as a baseball, your body uses muscles and tendons in your fingers, arm, wrist, and hand. As the muscles in your arm contract, they pull on tendons, closing your fingers around the baseball. The bat’s claws work in a similar fashion.

To hang upside down, a bat flies into position, pulls its claws open with its muscles, and finds a surface to grip. To get its claws to grab hold of the surface, the bat simply lets its body relax. Unlike human tendons, which are connected to muscles, bats’ tendons are connected directly to their upper bodies; they don’t need to use their muscles at all while gripping something. When bats relax, the weight of their upper bodies pulls down on the tendons connected to their toe claws, causing them to clench closed. The toe joints lock into position, and the bat’s weight keeps them closed.

The bat doesn’t have to do anything to hang upside down. It only has to exert energy to release its grip, flexing muscles that pull its claws open.

In Parshat Shemini (11:13–19), the Torah lists twenty-four types of non-kosher birds. Interestingly enough, the last species named on this list is the atalef. Although some commentators state that the atalef is a small creature that flies at night, the general consensus is that it is a bat.

At first glance, this may seem problematic, as we know that bats are not birds; they are mammals. (Bats are actually the only mammals that have wings.) One might wonder why the bat is listed as one of the twenty-four “birds” in the Torah that are categorized as being non-kosher.

The answer, though, is pretty simple. The Torah does not classify animals the way science does.

For the Torah’s system of classification, the animal kingdom is presented in terms of halachic purposes, the relationship between animals and human beings, and the perception by the common person. It does not necessarily classify the animals based on their anatomy, the way science, l’havdil, does.

According to the Torah, anything “bird-like” is classified as ohf, and this includes bats.

Q: Why don’t bats live alone?
A: They like to hang out with their friends!