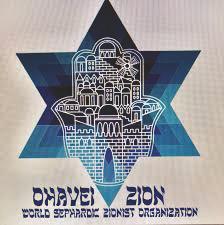 Voting is already underway for the 38th World Zionist Congress – the legislative body of the World Zionist Organization (WZO) which sets priorities and policies regarding funding and points of focus for the organization’s wide range of activities.

All Jews living in the United States age 18 and over are eligible to vote, the only requirement being affirming their commitment to the WZO’s official platform (called “The Jerusalem Program”), which consists of the basic principles of Zionism.  Voting began on January 21, and ends on March 11.

Voters have the opportunity to choose between 15 slates, one of which is Ohavei Zion – World Sephardic Zionist Organization (WSZO), the only slate with members from our Sephardic community.  The organization was founded by Rabbi Elie Abadie and Rabbi David Bibi in 2015, in advance of the 2016 elections for the World Zionist Congress.  WSZO is a member of the American Zionist Movement (AZM), and is not affiliated with any political party or faction in Israel.  The body won seven seats in the 2016 elections, but unfortunately, three were disqualified due to technicalities.

WSZO’s mission statement explains that the organization was established “so that the Traditional Sephardic community will have a voice and an influence on the direction of Jewish education within our communities and throughout the world.  This will enable us to provide funding for programs in support of Jewish Education and Identity, Zionism and the support of the State of Israel as the Jewish Homeland.”  It expresses the view that Sephardic Jewry “must chart our future within the Jewish People in our unique way based on our Torah Tradition, values and inclusiveness.”  Bemoaning the fact that “for too long we have been silent,” WSZO seeks “to take responsibility to share the beauty of our Sephardic Heritage with our Jewish brethren and to allow our voice to be heard.”

The World Zionist Organization is expected to distribute some $4 billion for Jewish education in the Diaspora during this coming year alone.  Budgetary priorities will be determined by members of the Congress who are now being voted in, making the current elections a matter of great importance.

WSZO is running on a platform that includes “furthering Jewish and Zionist education,” “promoting spiritual and cultural Sephardic values and heritage,” “instilling a love of Torah values and the appreciation of Missvot,” and “pursuing Jewish unity and respect for each other.”  Additionally, it pledges to work towards fighting anti-Semitism and anti-Zionism, as well as “combating assimilation through Jewish pride and identity,” and “protecting and defending Israel and the Jewish People from the secular onslaught and watered down Judaism.”

The organization hopes to have a large representation in the Congress, which will mean access to vitally important funds for Sephardic institutions and programs.

WSZO is running an impressive and diverse slate, consisting of prominent and influential figures from across the spectrum of the Sephardic community.  These include:

More information about the upcoming elections, as well as instructions for registering and voting, are available at www.zionistelection.org.  A video about the elections was produced by the American Zionist Movement and is available on YouTube under the title, “Vote in the World Zionist Congress Election.”

The current elections offer our community a rare opportunity for our voice to be heard in the boardrooms of one of the largest and most influential Jewish bodies in the world.  With $4 billion at stake, it behooves all of us to take a few minutes to cast our vote in order to help strengthen our own community, the State of Israel, and worldwide Sephardic Jewry.