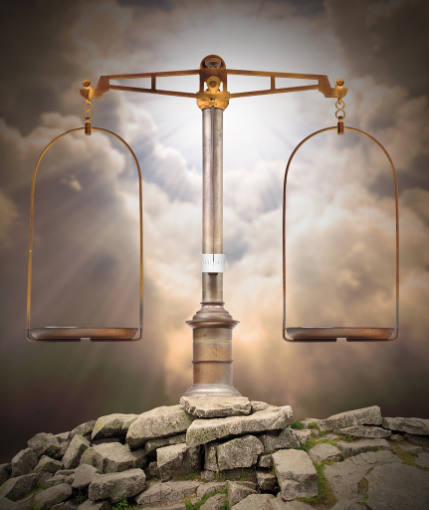 During this time of fear and uncertainty – it is important to affirm that Hashem is always just – and that He knows exactly what He’s doing – even when we don’t understand.

There is a famous teaching in Pirkeh Avot, “Heveh dan et kol ha’adam lechaf zechut” – we are to judge our fellowman favorably.  When we see somebody engage in suspicious behavior, or conducting himself in a way which seems inappropriate, we are to judge him charitably and realize that there are many factors that we are unaware of.  We do not know all the reasons why another person acts or speaks as he does.  In fact, we might not even know any of the true reasons.  So we must be favorable in our judgement, instead of rushing to criticize and condemn.

This is a famous rabbinic teaching, but what’s not as well known is that according to a number of sages, giving the benefit of the doubt is not just a nice thing to do, but an outright Biblical command.

The Torah instructs in Sefer Vayikra (19:15), “Betzedek tishpot amitecha – Judge your friend justly.”  According to some views, this verse introduces an obligation to judge all people favorably and give them the benefit of the doubt.  This is not something only for the extremely pious among us; this is a Biblical command charged to each and every Jew.

Gd as Our “Friend”

One of the Tosafists (Medieval scholars of France and Germany), Rabbenu Avigdor, extended this Biblical command even further.

He explains that the when the Torah here obligates us to judge “your friend” favorably,” it refers to the greatest “friend” we have – our Creator.

Yes, Gd is truly our “best friend.”  What is a friend, after all, if not somebody we can always turn to at any time, somebody who always wants what is best for us, somebody whom we are never ashamed to confide with, or to share our fears with, somebody who is always ready to listen, and somebody who loves us unconditionally?  Gd is all these things.  Of course, He is also much more than that.  He is also our King, who gives orders that we are to loyally obey.  But we must never forget that He is our friend – the greatest friend we can ever have.

The Talmud in Masechet Shabbat tells the famous story of the gentile who came to Hillel and said he would convert to Judaism if Hillel could teach him the entire Torah in a few seconds, while he stood on one foot.  Hillel replied, “Do not do to your friend that which you do not want to done to you.  The rest is commentary.”

While it is commonly assumed that Hillel’s response refers to the famous command of “Love your fellow as yourself,” Rashi explains it differently.  Rashi writes that Hillel was speaking about Gd.  The crux of Torah Judaism is that we must fulfill the wishes of our “friend” – the Almighty – just as we want others to fulfill our wishes.  The most important and closest friend we have is Gd.

Returning to the command to judge favorably, Rabbenu Avigdor explains that “betzedek tishpot amitecha” means that we must give Gd the benefit of the doubt, and trust that He always does the right thing, even if it appears otherwise.  According to Rabbenu Avigdor, this verse introduces a Biblical obligation of tziduk hadin – affirming that everything Hashem does is just, even if He seems to deal with us harshly, and even when life seems unfair.

We are to judge other people favorably because we know so little about what they do and why.  This is true also about Gd, but infinitely more so.  We know far less than an infinitesimally small percentage of Gd.  We cannot even begin to understand His workings.  “For as the heavens are higher than the earth, so are My ways higher than your ways, and My thoughts from your thoughts” (Yeshayahua 55:9).  Just as we cannot assess a person’s character based on a single incident, a single remark, a single decision, a single text message, or a single social media post, similarly – and so, so much more so – we cannot determine Gd’s essence based on a single event, or even many events.  We see and understand so little about Gd.  And so “betzedek tishpot amitecha” – we must judge Him favorably and give Him the benefit of the doubt, trusting that He absolutely knows what He’s doing.

The Daily Privilege of Tahanunim

Rabbenu Avigdor adds that we fulfill this mitzvah each and every time we recite the daily tahanunim prayer.  After the vidui declaration, when we silently confess our sins (“Ashamnu bagadnu…”), we then loudly and publicly proclaim, “Ve’atah tzadik al kol haba alenu – but You are righteous in all that has come upon us.”  This proclamation, Rabbenu Avigdor writes, fulfills the Biblical requirement of “tziduk hadin,” of giving Gd the benefit of doubt, affirming our belief and conviction that everything He does is just.

And what a precious mitzvah this is!

Rabbenu Avigdor writes that at this moment, when we announce, “Ve’atah tzadik al kol haba alenu,” Gd summons all the heavenly angels and proudly shows them what we are doing.  He points out how although His beloved nation endures a great deal of hardship and difficult challenges, they don’t complain.  They accept it all as His will without protest.  They fully trust that everything He does is just, no matter what they are going through.  The recitation of tahanunim each day is such a powerful moment, a moment which brings Gd immense joy and satisfaction, as it were, to the point where He assembles the angels so He can show them how great His nation is.

To demonstrate the immeasurable value of this mitzvah, Rabbenu Avigdor draws our attention to Pharaoh’s reaction to the plague of hail.  He called for Moshe and Aharon and confessed to them: “Gd is righteous, and my nation and I are the wicked ones” (Shemot 9:27).  The Midrash teaches that in reward for this pronouncement, Pharaoh was saved at the time of the miracle of the sea.  The entire Egyptian army was drowned, but Pharaoh’s life was spared – because of the one moment of tziduk hadin, when he proclaimed that Gd is just.

This is remarkable.  Pharaoh committed the most heinous crimes imaginable.  He was an idolater, and an unconscionably barbaric and cruel tyrant.  He killed innocent people and inflicted pain and suffering upon countless others.  He repeatedly and stubbornly refused to yield.  Even after announcing, “Gd is righteous,” he quickly changed his mind – for the seventh time! – and continued enslaving Beneh Yisrael.   And yet, he was saved from death because of that one moment of tziduk hadin, that one time when he acknowledged Gd’s righteousness.

We cannot even begin to imagine how powerful our daily recitation of tahanunim is.  Each day, we have the opportunity to fulfill this most precious mitzvah – the mitzvah of affirming Gd’s righteousness.  Many people look forward to those occasions when we skip tahanunim, but it should be just the opposite – we should be excited over the priceless opportunity to declare Gd’s righteousness, to affirm that He is always just, that He knows exactly what He’s doing, even when we don’t understand.

Each morning, we recite as part of the morning Shaharit service the 100th chapter of Tehillim, “Mizmor le’todah.”  This is a brief but festive chapter, expressing our gratitude to Gd.

The surprising history of this chapter is revealed to us by the Talmud Yerushalmi (Shavuot 1:5).  The Yerushalmi teaches us that this chapter was actually composed by Moshe Rabbenu, and he wrote it after hearing the command of the kohen gadol’s confession on Yom Kippur.  As part of the special service performed in the Bet Hamikdash on Yom Kippur, the kohen gadol would place his hands on the head of a specially designated goat and confess the nation’s sins.  The goat was then sent out into the desert and killed, symbolizing the elimination of the nation’s guilt.  Upon hearing this command, Moshe erupted in joy.  He composed, “Mizmor letodah” expressing his overflowing feelings of gratitude for this precious opportunity Gd gives us to confess, to acknowledge that He is just, to admit that we are wrong and thereby earn His forgiveness.

The Shulchan Aruch, our halachic code, writes (Orah Haim 51:9) that “Mizmor letodah” should be chanted in a melody.  There is no other part of the prayer service which the Shulchan Aruch requires singing – because there is no greater source of joy than the joy of confession, of affirming Gd’s righteousness.

People mistakenly think that confession is depressing, and is intended to make us feel sad and miserable.  But this is not true.  Confession is uplifting and exciting.

When we affirm Gd’s righteousness, we affirm that the world, and life, is good.  We affirm that as frighteningly random and unfair as life seems to be, there is a just reason for everything that happens.  Tziduk hadin gives us an invaluable sense of security and confidence during confusing and scary times.  It arms us with the awareness that we are in the hands of a just, merciful and compassionate Friend, who loves us more than we can imagine, and who runs everything in the world in the fairest and best way possible.

During this time of fear and uncertainty, let us joyously sing “Mizmor letodah.”  Let us find happiness, comfort and strength in our firm belief that Gd knows what He is doing, that He can be trusted to run our affairs and run the world perfectly, exactly the way they should be run.  Let us celebrate the great blessing of faith, which empowers us to feel secure and confident even in this period of upheaval by assuring us that we are in good hands, and that we have a Best Friend always looking out