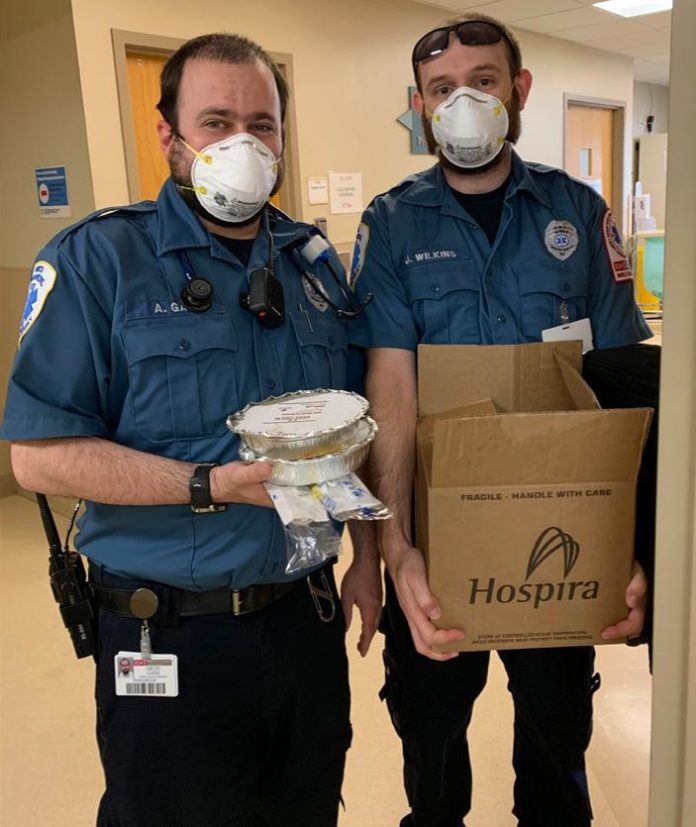 You shall not profane My holy name, that I may be sanctified in the midst of the Israelite people -I am the LORD Who sanctifies you:

In his masterwork Sha’areh Teshuvah (3:158), Rabbenu Yonah explains that Gd’s essential reason for sanctifying the Jewish nation with the Torah and mitzvot, and the reason He set us apart from the other nations as a people, is so that we could bring honor to His name. As a party to a bilateral covenant with Gd, we must sanctify Him, just as He has sanctified us.  By definition, then, a mitzvah is not a mitzvah unless it fulfills that requirement.  And so if an act or omission does the opposite, and profanes Gd’s name, then the individual undermines our mission to serve as an example and lead the world to recognize and draw closer to Gd.

This means, then, that all of our behavior, and certainly each and every mitzvah we perform, must be done in a respectful manner, and in a way that brings honor to Gd.

As the COVID-19 crisis began to unfold, every hour brought more dreadful news about the rapid spread of the virus, and about the drastic, desperate measures being taken to combat it.  The barrage of news from a hostile media included posts, programs, and articles featuring isolated cases of visibly observant Jews failing to adhere to social-distancing rules.  There was also footage of the F.B.I. seizing boxes of surgical masks in Williamsburg.

This negative publicity increased simmering hostilities towards Jews.  The distress was felt by Jews everywhere, including in our community.

It was readily apparent that the false narrative of an uncaring and selfish Jewish community would need to be countered.  This was not just a matter of stopping, or even slowing, anti-Semitism.  It was a matter of sanctifying, rather than desecrating, Gd’s name.

Many Jews answered the call and set out to write a much different narrative, and bring glory to the Jewish Nation, and to Gd.

Helping Out on the Front Lines

The lightning speed of the virus’ spread gave rise to the fear that the health system would be overwhelmed, and incapable of handling the number of ill patients. And so besides the urgent need to “flatten the curve” through social distancing, it was especially important to provide support for frontline healthcare professionals.  Hospital staffers were serving multiple shifts without time to run out for a meal. They were putting in long, grueling days without rest and without food.

Already by the end of March, many in the Jewish world had mobilized to step in and help.   Lakewood Bikur Cholim set up a vast operation of food preparation and delivery focusing on hospitals in Ocean and Monmouth counties.  Kosher19, a start-up, would eventually deliver over 10,000 kosher meals to 169 hospital units throughout multiple states.  Closer to home, aside from the ongoing efforts of our community institutions, many individuals raised money for kosher restaurants to prepare and deliver meals to hospitals.

Still, there was more to be done.

The frantic rush to feed and equip all these professionals meant inefficiency. There were times when multiple donors were catering meals on the same day, with no meals being provided at all the next day. Hospitals were awash with food, but most of it was not kosher, so religiously observant Jewish staff members could not eat.

In speaking with a number of individuals involved in this effort, there emerged several good reasons for the Syrian community to organize its own relief effort.  First, coordination among Jewish donors, at least in several hospitals serving our community, could improve efficiency and better provide meals and masks where and when they were needed.  Second, our experience in dealing with all types of Jews and non-Jews uniquely positioned us to serve as a bridge to society at large.  Third, a single organization would synchronize and amplify individual efforts, making for a more resounding kiddush Hashem.

Honoring the Memory of a Matriarch

And so SYNC – Standing with Your Neighbors against COVID-19 – was established, in memory of my dear mother, Rose Mishaan, Shoshana Rose bat Esther, a”h, who passed away in her sleep at the age of 96 early one Shabbat morning during the early stages of the COVID-19 lockdown.

My mother was a great-great-grandmother many times over, and a matriarch who presided over a family with diverse talents and diverse opinions.  She possessed many great qualities and inspired people with her “can do” attitude.  During the shivah, which I spent alone, on a beach chair in an empty room, in the middle of a lockdown, I could barely keep up with the steady stream of texts, emails, and WhatsApp messages expressing sympathy and consolation for my loss.  The deluge of wishes came as no surprise, given how many lives she had touched during her 96 years.

It was only fitting, I thought, to honor my mother’s memory with a project which would help untold numbers of people..

The concept was received with great enthusiasm.  A committee of volunteers and advisors was assembled.  Adults, teenagers, and families from all over the Brooklyn, Deal, and Manhattan community were enlisted for daily deliveries.  Generous donations began to flow in from all corners of our community.

In April and May, SYNC arranged for delivery of thousands of kosher meals to three hospitals serving the Syrian community – in Brooklyn (Maimonides), Deal (Monmouth Medical), and Manhattan (Weill Cornell).   Working with reliable hospital personnel, SYNC ensured that kosher medical professionals regularly received kosher food, and that meals for entire emergency rooms were delivered when necessary. SYNC made it very clear to hospital administrators that we cared about non-kosher staff, too, and stood ready to feed them should the opportunity arise.  As our patient representative at Maimonides told me, “SYNC was the first and only Jewish organization to inquire about the needs of the non-kosher staff and to provide kosher meals to the entire emergency room.”

SYNC has also delivered kosher meals to police departments, and has delivered hundreds of surgical masks to Monmouth Medical.  At Ocean Township’s Memorial Day ceremony, Mayor Christopher Siciliano presented our masks as a gift to the Catholic War Veterans and to the Jewish War Veterans.  SYNC also cosponsored a Zoom town hall meeting with Mayor Siciliano that drew 285 participants and reflected our community’s civic engagement.

At the time this article is being written, the virus’ spread has slowed considerably.   Doctors are no longer working double shifts, and hospitals no longer need food and masks. Many of our partners and others have wound down their charitable operations.

But SYNC’s efforts have just begun.

The economic impact of the lockdown is still being felt every day in and outside our community, and the recovery is only in its very early stages.  As we sift through potential projects, SYNC is reviewing proposals from food banks and shelters for battered women.  We are also speaking with fundraisers who donate to widows with large families who are hesitant to request help.

The obligation to sanctify Hashem’s name requires us to show gentiles that our mission is to help not merely Jews, but all of mankind.  In a time of crisis, that means being in “SYNC” with relief efforts.  We are making a loud, clear statement to our neighbors that our community stands with them. And, we are making a loud clear statement to ourselves that we are SYrian Neighbors against COVID, that we have been given a special mission by Gd to look out for all His creatures.

Our Instagram handle (@SYinSYNC) and our domain name (www.SYinSYNC.com) were chosen for this reason.  When typing in those letters, one is reminded that he or she is in SYNC with helping others, both in and outside our community. It is our hope that the crucial message of kiddush Hashem will thereby be internalized.

Please visit our website at www.SYinSYNC.com to learn more.  There you can find pictures and videos, and sign up to volunteer or donate by credit card or PayPal (email reference: info@magendavid.net).  Checks can be made payable to “Congregation Magen David of West Deal” and sent to 395 Deal Road, Ocean, New Jersey  07712.  Please indicate “SYNC” in the memorandum of your payment to ensure that your payment is properly allocated.

Although our community should and must continue to provide for its own, kiddush Hashem demands that we lead by example and demonstrate concern for the general public.  Especially during a crisis of epic proportions, we must set aside some of our charity funds for the purpose of demonstrating that, as the “chosen people,” Jews are “in SYNC” and actively involved in alleviating poverty, illness and distress wherever they may be found.