The Mitzvah Man organization is known as the place to call for those in need of hesed. During the extra challenge presented by COVID-19, their thousands of volunteers stepped up to the plate, and provided even more help than usual.

The quarantine was difficult for everyone, but those most affected were the homebound. Living by themselves, they felt even more isolated, which led many into serious depression. Holocaust survivors with no local family members always knew that visits from the Mitzvah Man volunteers would be the highlight of their week. They worried what would happen during quarantine.

Even those young and healthy members of the community were caught unprepared for the economic fallout from COVID-19. Small  businesses were collapsing because of forced closures.

Imagine the trauma felt by family members of patients who succumbed to the Coronavirus. We had an unprecedented number of funerals and families having to sit shiva without the moral support of other family members. To comfort a mourner one had to pick up the telephone to call, even if the mourner was the neighbor down the block. 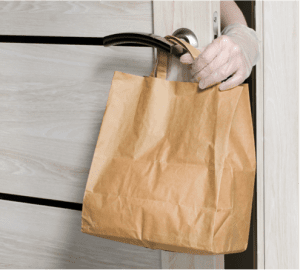 The Mitzvah Man compares his volunteers to a baseball team. Every player is valuable and has a role to play. The catcher, the first baseman, and the pinch hitter work together. Every member is important and is needed in order to provide the hesed that is the Mitzvah Man’s trademark.

From March 18 to mid-May the pandemic was rampant, and the Mitzvah Man volunteers found themselves busier than ever before.

“What we did is what we are geared up for,” the Mitzvah Man explained. “We have over 3,000 volunteers and a system to reach out to them from 8am in the morning until 10pm at night. We assisted over 1,000 people weekly with their needs during the heart of COVID-19.

“We have groups of women who take turns cooking hot meals. Hundreds of families had no way of getting their meals. We had drivers to deliver meals and medications.”

“Our phones were ringing off the hook, and within 20 minutes of every call our volunteers were out there filling the needs of the caller. Calls were coming in from the those who ordinarily have nurses or aides but because of the pandemic they could not get to work. People were alone and scared but we were able to reassure them.”

The Mitzvah Man organization was critical in helping people cope who were hit hard economically due to COVID-19. He arranged for store owners to provide merchandise on credit for those in dire need.

Volunteers delivered supplies to nursing homes and brought strong gloves and special protective masks to emergency personnel. Volunteers unloaded truckloads of food delivered to Brooklyn to be distributed to those in need.  Mitzvah Man drivers made deliveries from restaurants and pizza shops straight to the doctors and nurses at Maimonides and NYU Medical Center.

The organization has a list of repairmen for appliances (such as ovens and freezers) who volunteer their services or charge a nominal fee that the organization covers. In cases where a new appliance was needed, the Mitzvah Man was able to provide these as well.

Focus on the Elderly

Mitzvah Man volunteers regularly assist the elderly, particularly Holocaust survivors. Many are alone and homebound. Home visitations were replaced by phone calls. However, if there was a fear that something was wrong that a phone call could not help, the Mitzvah Man arranged whatever help was needed, of course taking all the precautions necessary.

One man called, panic-stricken. “What’s going to happen to me?” he cried. The Mitzvah Man reassured him, “Don’t worry. We will get whatever you need. Just relax. We are here for you. It might not be a good idea to watch Television during this time of the pandemic. We will make calls to you on a regular basis.”

Later, the man called back, saying that each one of the volunteers is an angel. “All my life I had Hashem, but I never had people. Now I have people” he said thankfully.

The Mitzvah Man states with pride, “I am the manager of a huge team. The COVID-19 pandemic brought out the best in my volunteers, and we were able to accomplish even more than we usually do.”