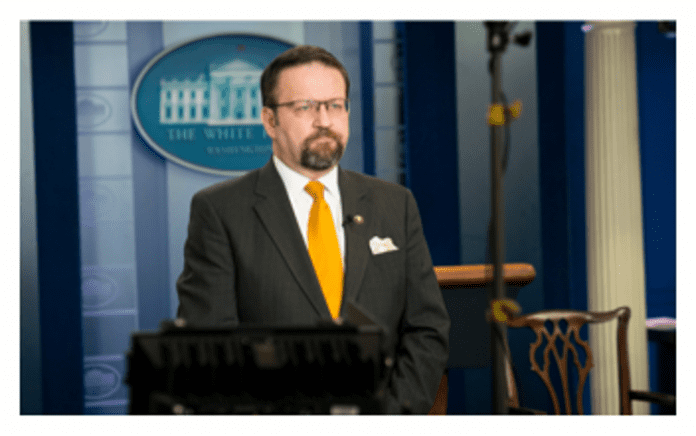 This past summer, Sebastian Gorka took on the role of presidential appointee to the Defense Department’s National Security Education Board. He says his position “Ensures that our Armed Forces have the requisite academic support from the private sector and academia in order to keep the Republic safe.”

Previously, Gorka served as Deputy Assistant to the President, and Trump’s strategist. Gorka’s initial remit was related to counterterrorism. However, once he came on board with all the clearances the job entailed, he worked on many other strategic issues, from the Defeat ISIS Plan, to the U.S. leaving the disastrous Iran Deal, and to dealing with the threat of China.

Gorka is also a Fox News contributor, and currently broadcasts his own radio show on the Salem Radio Network.

This election, Gorka says, will be more crucial than ever: “My biggest concern is the subversive Deep State, and getting our personnel policy right if, Gd-willing, we get the Boss re-elected.”

Community Magazine spoke to Dr. Gorka on several issues that concern our readers:

CM: You are a supporter of Donald Trump, and I’m curious to hear your response to the “Never-Trumpers” who say that his Twitter feed is unbecoming of an American leader.

Gorka: The mainstream legacy media is irredeemably corrupt. Just look at the way they aided and abetted the Obama administration, and the permanent bureaucratic class of Trump haters to subvert a duly-elected president with false accusations, such as Russian “collusion” and the Mueller probe.

That is why the President’s Twitter feed is so important, and why Never-Trumpers hate the fact that, with it, he can talk directly to more than 80 million people.

You have no right to call yourself a conservative if you complain about his tweets. With the caliphate of ISIS destroyed, 200 conservative judges and three originalist Supreme Court judges appointed, Jerusalem recognized as the capital of the eternal State of Israel, NATO revitalized, Iran contained, et cetera… Someone has a problem with his tweets? Those people are either leftists, or just fake conservatives.

CM: What are the top reasons, in your opinion, why North Americans should support Israel (not just Jews)?

More geo-strategically, Israel is the only functioning democracy in the Middle East. As such it is a beacon of hope for all those benighted communities in the Middle East who still yearn for freedom in the face of corrupt regimes, theocratic dictatorships, and religious fanaticism.

For that reason, all decent people should support Israel. But more importantly, all decent nations must support our great ally to ensure that the horror of the Shoah never happens again, and so that our Jewish friends will always have a safe homeland.

CM: Working with Donald Trump, what’s something you learned about him as an insider that most people don’t know, or might never see?

Gorka: That, despite the bluster and alpha-male character, he is also a very compassionate man. Read my book Why We Fight to get a full picture of who he really is.

CM: With the latest in peace deals between Israel, Bahrain, and UAE, these are optimistic times. What do you think differentiated Donald Trump from any leader before, that enabled him to foster this historic moment?

Gorka: Because he loves both Israel and the Israelis, and is not a career politician beholden to the moronic practices of the “elite” that failed in the Middle East for so long.

CM: What was the purpose of the Trump Plan for a “two-state solution,” if there was only an inevitable, predictable result of it being refused by the Palestinian leadership?

Gorka: Jared Kushner (the President’s son-in-law and advisor) and Jason Greenblatt (advisor on Israel) wanted to start with a tabula rasa (blank slate). This demanded figuring out for themselves that the PA was not acting in good faith, and that they still wish to see Israel destroyed. It took them two years to come to that conclusion by themselves.

CM: Trump visited Israel four months into his presidency. Trump recognized the Golan and Jerusalem as heirlooms of the Jewish people. And of course, he moved the embassy. His administration declared Israeli control over Judea and Samaria as “not illegal.” Trump removed Palestinian Authority funding and UNWRA funding. Question: What could a realistic “second act” look like?

Gorka: I can’t say more than just what is reasonable to expect in the near future: the addition of several more Arab nations to the Abraham Accords.

CM: In these particularly challenging times during COVID-19, people are worried about the economy and their own finances. What do you think has been a good move by Trump to help Americans get their heads above water?

Gorka: Everything. From the Payroll Protection for America’s businesses, to creating the fastest virus testing and vaccine production pipelines in medical history.

CM: Do you think the Capitol Hill Autonomous Zone (CHAZ) in Seattle – the month-long occupation protest that commandeered whole city blocks this summer – is just the beginning, or an aberration that will demonstrate itself to be a passing, failing fad?

Gorka: That is up to us. Brave Americans need to take a stand in the face of any new attempt to denude us of our rights, and subvert America, the greatest experiment in democracy the world has ever seen. That is why it is so vital that my boss, President Trump, be re-elected.