The Mitzvah Man organization is always on the lookout for how to bring joy to any Jew in need. And what better time to bring extra joy than during Sukkot, one of the happiest times in the Jewish calendar! In fact, the Mishna in Tractate Sukkah tells us that one who never saw the simha (joy) at the Place of the Water-Drawing (the Simhat Beit HaShoeva in the Beit HaMikdash) has never seen joy in his life.

Many sukkot adorn the front and back yards and terraces of the neighborhoods in our community. However, circumstances often do not permit for some families to have their own sukkah, even if there is room for one on their property.

Enter the Mitzvah Man. To help families to perform the mitzva of residing in their sukkot, this year the Mitzvah Man organization delivered 27 brand new sukkot to families that never before had their own sukkah.

On erev Sukkot, after all the deliveries were made and the sukkot were set up, the Mitzvah Man received a text. He could not get to it immediately, and thirty minutes later he opened it. It read: “Hi Mitzvah Man, my husband is in the sukkah store and wants to donate two brand new sukkot.” 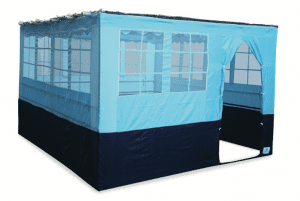 The Mitzvah Man returned the call as soon as he could, telling the woman who texted, Mrs. S.: “Baruch Hashem, we just gave away all the brand new sukkot that we had requests for. However, I will keep you in mind as it does happen that we get additional requests. But right now I have no one to give the sukkot to. Hashem sees your heart. We will stay in touch.”

“Please do,” answered Mrs. S., “however, at this point my husband is returning from the store which is quite a distance from us, and I don’t think that he will be going back. Certainly not on erev Sukkot.”

The Mitzvah Man got off the phone with Mrs. S. about 2pm. One hour later, he received two additional calls. These calls were requests for sukkot for two families that never had sukkot of their own before.

What a shame the calls had not come in an hour or two earlier! the Mitzvah Man thought. Then, Mr. S. could have bought those two sukkot he was willing to donate, and these families would be all set. Sadly, the Mitzvah Man told the callers he did not have more sukkot to distribute, but he would definitely keep them in mind.

At 3:30pm. the Mitzvah Man received a text from Mrs. S. As it turned out, when Mr. S. opened the box he brought home from the store containing his sukkah, he saw that a couple of items had not been put into the package. He was about to go straight back to the store and was still willing to buy those two new sukkot he had offered to donate.

Just imagine the holiday joy these two families experienced – at the very last minute!  Their brand new sukkot were delivered and installed an hour before the hag by the hesed loving Mitzvah Man volunteers. The Mitzvah Man organization always goes the extra mile to do hesed!

Everyone involved in this special mitzvah was amazed by the hashgacha pratit, the Divine Providence of our Creator.

We could say that it was just another day, another story for the Mitzvah Man organization, but our rabbis say it better – missva goreret missva. One mitzvah causes another mitzvah to happen.

The Mitzvah Man never ceases to be amazed by the hashgacha pratit he experiences on a constant basis and he always says, “When one has the desire to do hesed for another, the Bore Olam helps them along.”