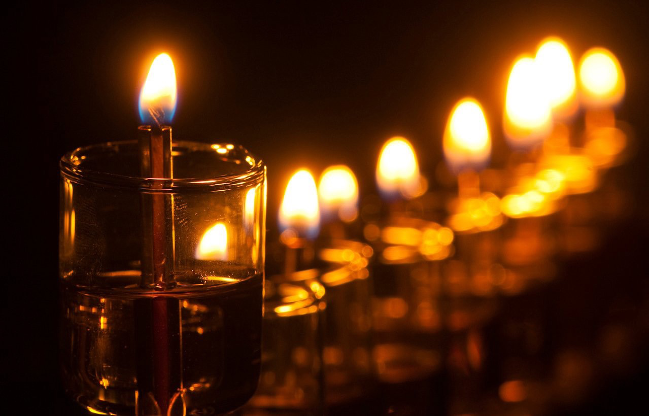 If we want our mitzvot to “shine” brightly, we need to invest in them.

Before Hanukah, we’re all going to go out and purchase either a whole bottle of oil or a large box of candles for kindling the Hanukah lights.

Here’s a question you probably would never expect a rabbi to ask: why is this necessary?  Why do we need a whole bottle of oil, or a whole box of candles?

But the Gemara explicitly says that we really need only 8 candles – one each night.

Every Jew who is in even the slightest way observant does not only fulfill the mitzvah of Hanukah candles – but fulfills it at the highest standard, the standard of mehadrin min hamehadrin.  What’s more, the Shulhan Aruch, our basic halachic code, does not even mention the first two options.  Already many centuries ago, it became universally accepted to perform only the highest standard.

The question becomes even stronger when we consider halachah’s general attitude towards hiddur mitzvah – the requirement to “beautify,” or enhance, our observance of mitzvot.  The Talmud requires that we strive to perform more than what the minimum mitzvah obligations demand.  For example, we should adorn our sukkah to make it beautiful, and try to purchase the highest-quality etrog, tallit, and tefillin.  However, as important as this is, halachah puts a limit on this obligation, requiring us to spend up to 33 percent of the cost of the basic mitzvah to enhance the mitzvah.  If a basic etrog costs $60, then we should be prepared, if we can, to spend as much as $80 for a higher-quality etrog.

Now let’s go back to the Hanukah candles.  Here, we find something very peculiar – in order to fulfill the mitzvah on the highest standard, we pay several times more than we would have to pay for the basic mitzvah.  Instead of lighting just eight candles throughout Hanukah, we light four-and-a-half times more – 36 candles.

How do we explain this?  Why do we go so far beyond what is normally expected, and fulfill this mitzvah at such an exceptionally high standard?

This question was posed by one of the great Hassidic masters, the Hiddusheh HaRim (Rav Yitzhak Meir Alter, founding Rebbe of Ger, 1799-1866), whose answer sheds an entirely new light (pardon the pun…) on the Hanukah candle lighting.

As we all learned as young children, the Hashmonaim (Hasmoneans), the group of kohanim who led the revolt against the Greeks, liberated Jerusalem and the Bet Hamikdash, and they wanted to kindle the menorah, but all the oil had been defiled by the Greeks.  All they found was a single jug of oil which, the Gemara tells, bore “the seal of the kohen gadol [high priest].”  This unbroken seal assured that the oil inside had not been tampered with, and was thus suitable for the menorah lighting.

One detail of this story often goes unnoticed.  Why did the kohen gadol have a seal?  Since when was the kohen gadol in the “kashrut” business, authorizing the suitability of oil for the kindling of the menorah?  Was this part of his job?

However, there is one piece missing from this otherwise ingenious theory.

This detail seems to throw a wrench in the Hiddusheh HaRim’s analysis.  If the jug of pure oil discovered by the Hashmonaim was earmarked for the kohen gadol’s offering, then how could it be used for the kindling of the menorah, which requires the highest quality oil?  What allowed the Hashmonaim to use the kohen gadol’s oil for the kindling of the menorah, given that it was not necessarily of the pristine quality which the menorah demands?

The Hiddusheh HaRim’s answer to this question holds the key to this entire subject.

He explains that the kohen gadol went beyond the strict halachic requirements, striving to fulfill his mitzvah at the highest possible standard.  He was not content doing just the minimum.  He strove for more.  And so he ensured to use for his daily grain offering the purest oil – the same kind of oil used for the menorah.  The Hashmonaim knew this, and so once they found a jug of oil bearing the kohen gadol’s seal, they felt confident that this oil was suitable for the menorah.

It turns out, then, that the miracle of the oil was the direct result of one man’s hiddur mitzvah, his insistence on striving for the highest standards of mitzvah observance.  It was only because this kohen gadol made a point of fulfilling his mitzvah at the highest level that oil was found for the menorah.

The Matzah vs. The Salad

This explains why the concept of hiddur mitzvah plays such a crucial role in the Hanukah celebration, why we all extend ourselves beyond what the minimum obligation requires, and fulfill the mitzvah at the level of mehadrin min hamehadrin.  This concept is an integral part of the Hanukah miracle.  This miracle was made possible by a kohen gadol who strove for the standard of mehadrin min ha’mehadrin – and so we, too, in celebrating this miracle, reach for this level.

King Shlomo famously teaches in the Book of Mishleh (6:23), “Ki ner mitzvah veTorah or” – “For a mitzvah is a candle, and Torah is light.”  Mitzvot, which illuminate our lives, are compared to candles.  And thus the Hanukah candles are representative of all mitzvot.  Just as we strive for the highest standard in regard to the Hanukah lights, so must we strive for the highest standard in fulfilling all mitzvot.

Baruch Hashem, we can be very proud of the way we in our community abide by this value of hiddur mitzvah.  Generous donors and devoted volunteers ensure that our synagogues are magnificent buildings, and that the highest quality Torah scrolls are produced.  Our yeshivot refuse to compromise on the highest standards of Torah education.

I have, however, unfortunately also seen the opposite – misplaced priorities, and contentment with mediocrity with regard to what should be the most important part of our lives, mitzvah observance.

I recall once being asked by a very wealthy man to come to his new mansion to show him which rooms require mezuzot.  As we went through the house, I marveled at the doorknobs – and he informed me that each of the dozens upon dozens of doorknobs in the house cost him $500.  When I later told him the cost of high-quality mezuzot – which is much lower than $500 – he grumbled, preferring to settle on the cheapest, lowest quality mezuzot.

On another occasion, I was speaking to somebody before Pesach, urging him to purchase shemurah matzah, the special kind of matzah required at the seder.  He asked me how much it costs, and I told him that it usually sells for around $27 a pound.

“No way am I spending that on matzah!” he said.

Sometime later, I heard him speaking to his friend about a terrific restaurant where he had eaten dinner the night before.  I looked up this restaurant on the internet, and I saw that guests in this restaurant can order a salad – a salad!!! – for $27.

For a salad on a random weeknight, he was happy to spend $27, but not for a pound of matzah to fulfill a precious mitzvah on one of the most important nights of the year.

I have unfortunately also encountered families that happily spent tens of thousands of dollars on their son’s bar-mitzvah celebration, but settled for the cheapest pair of tefillin they could find…

The Hanukah celebration should remind us that when it comes to mitzvot, we should strive for the best.  If we spend large sums of money on beautiful homes, designer clothing, luxury cars and vacations, then we should not be spending any less on our mitzvot.  Performing mitzvot must be our highest priority, and must never take a backseat to any other area of life.

Let us ensure that all our mitzvot shine brightly like the Hanukah candles, by investing as much as we can into each and every mitzvah that we perform.