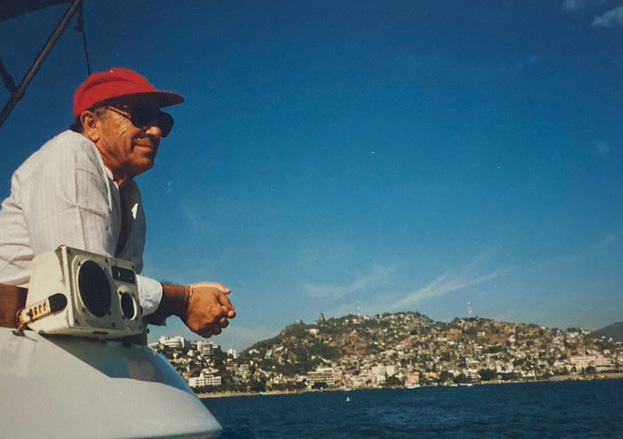 A Tribute to Isadore “Izzy” Shamah

“Ethics of the Fathers” presents us with the basic principles of Torah values – and few embodied these values more than Izzy Shamah, who passed away this past March at the age of 98.

Rav Yisrael Salanter (1810-1883) taught that it is harder to change one character trait than it is to learn the entire Talmud.

Fortunately, our sages provided us with a priceless manuscript of wisdom, Pirkeh Avot (“Ethics of our Fathers”), to guide us in our pursuit of character development. This text is customarily studied during the weeks between Pesach and Shavuot, as part of our preparations for receiving the Torah. As I learned it this year, while also conducting interviews and researching for this tribute to Mr. Isadore “Izzy” Shamah, a”h, who passed away just before Pesach, I was struck by how many of the essential character traits prescribed by our sages he embodied.

Izzy (Ezra ben Rosa) was very blessed, in every way. Not only was he a successful businessman who raised a beautiful family, but he was also blessed with the gift of clarity. He understood what was important in life, and he dedicated his life to bringing goodness into the world. Both personally and professionally, Izzy epitomized the three “pillars” upon which the world stands, as taught in Pirkeh Avot (1:2) – Torah, avodah (service of Gd), and gemilut hasadim (kindness to others). He was instrumental in the foundation of Beth Torah in Brooklyn, and he spent his life extending loving kindness to others.

Having never finished high school, Izzy lamented his lack of education, never considering himself “smart.” But according to Pirkeh Avot’s definition of “smart” – “Who is wise? One who learns from all people” – Izzy was about as “wise” as they come.

He considered his time in the army, where he received an exceptional score on his IQ test, equivalent to a college education. As Isaac, his oldest son, says, “He felt that the army helped him grow up, see the world and blossom.” His experiences first in Savannah, Georgia and then in France, taught him skills like cryptography and coding and decoding messages as he rose to the rank of sergeant. He returned with newfound confidence and self-worth that allowed him to take on the world.

He began to work hard, to hustle, to pounce on every opportunity that presented itself. And he continued learning, about business and about himself, from every experience. As told to Sophia Franco in a 2005 interview for The Sephardic Angel News, Mr. Shamah acknowledged, “You cannot run a business by yourself. It was this lesson that I had to learn before I could become a true success. I was arrogant enough to believe that nobody could do the job as well as I could. It was a rude awakening when I found out they could do it even better, but it is what I needed to hear to move forward…” Having acquired the precious asset of humility, he went on to not only succeed in many endeavors, but also guide others toward success.

Along with his triumphs, life sent Mr. Shamah some challenges, as well – challenges that would have left a man of lesser faith depressed and debilitated. His son Harold (“H”) describes how Izzy’s philosophy of life empowered him to deal with adversity. “Dad realized that difficulties are part of the fabric of life and a means to build your character. He always believed we should not be afraid of adversity or regret the difficulties, because they are a way to grow.”

And, amid the hardships, Izzy never lost his deep gratitude and appreciation for all that he had in his life, most importantly, his wife and children. Embodying yet another timeless teaching of Pirkeh Avot – “Who is wealthy? He who is satisfied with his lot” – Izzy always saw his glass as full. 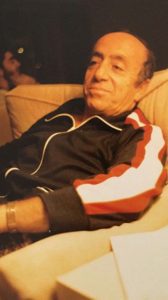 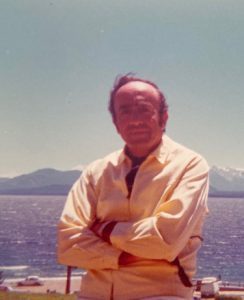 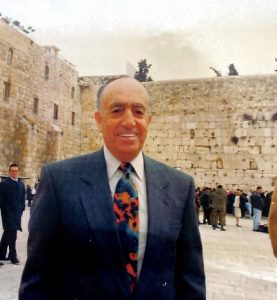 “What’s Mine is Yours”

In another famous passage in Pirkeh Avot, we find Hillel’s famous exhortation: “Be among the students of Aharon, loving peace and pursuing peace, loving people…” Izzy was well known for loving and promoting peace and harmony. His daughter Mimi says, “My Dad lived by the mantra, ‘love and forgiveness.’ I never saw my parents fight, although I’m sure they had disagreements. And if ever he was upset at any of us, he would always come in and give us a kiss before sleeping and say, ‘I love you.’”

Many people who knew Izzy – friends, family members, business associates – would seek out his counsel when facing a difficult problem or making important life decisions. Business associate Jackie Rahmey says, “He gave time…mediating between fighting partners, working on fixing broken marriages, and helping people whose businesses were struggling.” His son Harold recalls that Izzy always “heard both sides of the story before giving advice,” and conducted himself with the principle that making peace is more important that being right. When his daughter, Rozy Cohen, was asked to identify the most important thing she learned from her dad, she responded, “How to say ‘I’m sorry’.”

In the fifth chapter of Pirkeh Avot, the Mishnah describes four types of people. The most revered type, to which the Mishnah refers as a hassid – “pious person,” is one who says, “What’s mine is yours, and what’s your is yours.” Rashi, in his commentary, explains, “The scrupulously pious person allows others to derive enjoyment freely from whatever he owns, and yet he does not permit himself to benefit from the property of others.”

By this definition, Izzy was truly a hassid. He and his wife, Renee, lived their lives with the attitude of, “What’s mine is yours, and what’s yours is yours.”

Izzy and Renee opened their homes in New York City and Florida to countless friends and family members. Even when not in residence, they welcomed people to use their apartments with one request: to sign the guest book – which, according to Mimi, grew to 6 volumes. I marveled to Renee over their generosity in opening up their home. Her simple yet profound response was: “We’re sharing.” Another family member recalls that during a difficult time, Uncle Izzy “in his humble and generous way, handed us the keys to his city apartment and an envelope of money to assure we would enjoy our getaway weekend. It was a gesture of love that instilled hope and helped us get through a difficult time.”

According to Isaac, Izzy and Renee “lived humbly for their wealth,” and were always more interested in giving than receiving. Renee would remind Izzy, “We have everything we need. Let’s give it to the children.” They generously funded the education of each of their grandchildren, loaned money to numerous people starting businesses, and donated funds to start various Torah institutions.

But where Mr. Shamah took “What’s mine is yours, and what’s your is yours” to the next level was in is interpersonal relationships. For him, treating others with respect was paramount. He believed that we must show love not because it benefits us, but because everyone deserves to be loved. And he realized that a smile and a hearty “good morning!” are precious gifts – following yet another directive in Pirkeh Avot (1:15): “Greet every man with a pleasant face.” Jackie Rahmey recalls, “He greeted everyone by name, no matter what their status in life. He inquired about the family and made you feel at that moment that you were the most important person to him.”

This theme, that Izzy made everyone feel like his favorite, was echoed by everyone I spoke to – and it actually sparked debates within the family about who was Dad’s/Grandpa’s favorite. Ultimately, everyone agreed that to be in Izzy’s presence, to hear his genuine “I love you” at the end of every phone conversation, meant you were special to him, and that was enough.

Izzy showed love and respect for everyone he met, from the doorman to the gardener to his dear friends and family. His warmth and sincerity made him a perfect confidante. One friend describes how he would take long walks with Izzy and they would discuss their problems. By the end of the walk, they would resolve whatever issue was troubling them.

“As long as I have Izzy,” he would say, “I will never need a psychologist.”

Another acquaintance recalls, “Izzy knew a lot of things about a lot of people that he would never divulge. He was like a doctor.” Daughter Rozy adds, “My Dad had an intuition for who needed something,” such as a kind word, a smile, or advice, which he gave freely. “He was like a magnet.”

We come into this world with the task of finding our purpose and perfecting our character – and this was Izzy’s aspiration throughout his life. He said of himself in the aforementioned interview with Sophia Franco: “Some people are born with traits. I think I created mine. I don’t know how much talent I really had. I didn’t know how much I could accomplish, but I worked many hours anyway, determined to make something of myself.” 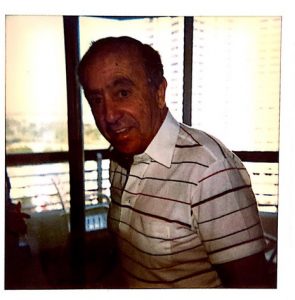 “You are not obligated to complete the work, but neither are you free to desist from it” (Pirkeh Avot 2:16). We are not expected to complete the task of spiritual growth and perfecting the world, but we are obligated to commit our best efforts. Izzy Shamah spent 98 years living this ideal, and left this world a better place than he found it. By all accounts a worrier, he sought out opportunities to support and benefit others, and responded to the needs of his friends and family with an open and generous heart.

Isaac speaks for all of us when he expresses the hope that his father’s legacy of honesty, hard work, seeking peace, forgiveness, and putting others before himself is one that will “live through our actions and through our caring and open-heartedness for each other, and for our working to resolving conflicts.”

The family invites anyone wishing to share a story about their experiences with Mr. Shamah to send it to grandpaizzyshamah@gmail.com. 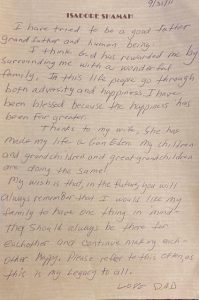