The world will undergo drastic changes following the wars of Gog Umagog and Mashiah’s arrival. In this month’s column we will attempt to paint the fascinating picture of how the world will appear and develop during the Messianic Era, based on the elaborate descriptions presented by the Prophets.

Our sages tell us that our final redemption from exile in the end of days will involve more than a military triumph over the enemy nations and renewed sovereignty over our homeland, the land of Israel. This alone would not guarantee an everlasting redemption. After all, the Maccabees defeated the Greek oppressors and regained control over the land, but, as we know, their victory was relatively short-lived. During the final redemption, by contrast, Hashem will reveal to the entire world His sovereignty, glory and love for the Yehudim. The miracles He will perform and the harsh retribution He will deliver upon the wicked people of the world will bring about a fundamental and permanent change in perspective on the part of the gentile peoples. The Yehudim’s stature as Gd’s Chosen Nation will finally be recognized universally and persecution of the Yehudim will end as they are accorded the honor befitting the Almighty’s beloved people.

The prophets further describe the end of all foreign beliefs and religions after Mashiah’s arrival. The remaining gentile nations will accept upon themselves Hashem’s kingship and unite in the service of the one and only Gd. They will even make frequent pilgrimages to the Bet Hamikdash, where they will learn how to properly serve the Creator. However, they will not be considered Yehudim themselves. Moreover, the truth of Hashem’s sovereignty will be so clearly visible, that people of the world will cherish the honor of serving members of Gd’s Chosen Nation. Indeed, the Talmud teaches that one who ensures to fulfill the missva of sissit properly will be rewarded with 2,800 willing avadim (!) in the Messianic era1.

The Prophets also foretell that peace and tranquility will prevail throughout the world with the onset of the Messianic era. The world will no longer be torn by war and conflict, and nations will no longer need to obtain weaponry or train armies. The entire world will unite in perfect harmony, bound together by their shared desire to fulfill the Divine will.

Our sages teach that in the beginning of creation, until Adam and Hava committed the sin of eating from the forbidden tree, the world was a far more perfect place than it is now. Firstly, Man was originally created to live in the idyllic conditions of the magnificent Garden of Eden, and was destined to live forever. At that time, the human being’s sole desire was goodness, and had no inclination to do evil. Animals, too, ate only plants and vegetation, and felt no instinct to prey on each other. It was intended that all mankind would maintain the highest possible level of prophecy, capable of conversing with Hashem freely, without restriction. Women gave birth on the same day they conceived, and did not have to endure the discomfort of pregnancy and labor. (In fact, Hava gave birth to Kayin and Hevel on the day she was created.) Similarly, trees and plants bore their fruits the day they were planted.

This all changed, of course, after Adam and Hava sinned. However, our sages tell us that in the Messianic Era, the world will return to its originally intended state of perfection. Man will no longer be inclined to do evil, and will instead be driven only toward righteousness and devotion to Hashem. Death will be eliminated from the earth, and the Yehudim will be elevated to such a high spiritual level that everyone – men, women and children – will receive prophecies from Hashem. (Different views exist as to whether death will be completely eliminated, or only among the righteous.)

According to many opinions, the animal kingdom will also return to its primordial state, at least in the land of Israel, and animals will no longer prey on one another. (Others maintain that the state of animals will not change in the Messianic Era.) Women will bear children on the day they conceive, and trees and plants will bear their fruits the day they are planted. All Yehudim will have all their needs cared for, and they will lack nothing. They will all immerse themselves exclusively in Torah study and the fulfillment of all the missvot. The world will thus return to its primordial state of perfection, and Hashem’s original intended purpose in the world’s creation will finally be realized.

The Land of Israel after Mashiah

Our sages describe the unparalleled splendor and glory that the land of Israel and its capital city, Jerusalem, will achieve after the coming of Mashiah. No foreign houses of worship will remain, and the entire land will be purified. The city of Jerusalem will be magnificently rebuilt, with huge diamonds and precious stones scattered throughout the city and freely available to all. According to one Midrash, the city will be surrounded with three massive walls of silver, gold, and precious stones with an additional wall of fire surrounding them. Mashiah, who will be a powerful king from the royal house of David, will reside in Jerusalem and rule over the entire world, making Jerusalem the capital and center of the earth. The land of Israel will encompass an area more than double the size of the present State of Israel; and according to the Midrash, it will actually expand immeasurably. 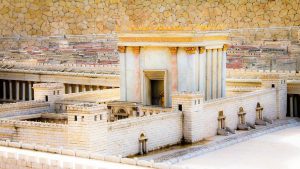 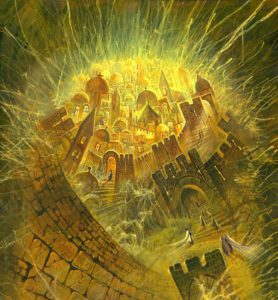 The arrival of Mashiah will also bring the long-awaited reconstruction of the Bet Hamikdash, which was destroyed nearly two millennia ago. The Temple will be restored to its previous state of glory, and the sacrificial offerings will be reinstated. The Yehudim will once again come to the Mikdash together as a nation three times each year on the pilgrimage festivals (Pesah, Shavuot, and Sukkot).

The rabbinic scholars debate the question of who will build the third Temple. Some say that Gd Himself will build the structure, which will descend readymade from the heavens in a pillar of fire. Others, however, contend that Mashiah will rebuild the Temple. There are some who claim that both views are correct: Mashiah will first rebuild the Temple, but then a spiritual Temple will descend from heaven and enter the Temple constructed by Mashiah, just as a soul enters a physical body.

The purpose of man’s creation, in its most simplistic description, is to resist the temptation to sin and act righteously, whereby he will be deserving of eternal reward in the world to come. This gives rise to the obvious question as to the purpose of man’s existence in the Messianic Era, when there will be no inclination toward evil. What will be the purpose of man during this period of time?

This question led the Ramban (Rabbi Moshe Nachmanides, Spain, 1194-1270) to claim that there will indeed be no reward given for serving Hashem during the Messianic Era, when people will not have free choice to do evil. (Remarkably, the Ramban calls the time of Mashiah “the unwanted days,” because they will not offer the possibility of earning eternal reward!) Others, however, disagree, and explain that even in the times of Mashiah, people will endure spiritual challenges, though not to the same extent as they do now. Although people will not experience an internal drive to do evil, there will be some sort of external force luring them to sin. Just as the snake lured Adam to violate Hashem’s command, similarly, in the Messianic era we will be exposed to external sinful pressures. We will earn eternal reward in the next world by resisting these pressures and remaining faithful to the Almighty.

The Messianic Era and Olam Haba

Many different opinions exist as to the duration of the Messianic Era. Some scholars say that this period will last for only 400 years, while others claim that it will endure for 2,000 years. After this period, the world will reach the stage called Olam Haba – the world to come, when all of existence will be transformed into an entirely new entity – which we will discuss at length in next month’s installment.