David Gindi calls himself “a regular citizen of the great United States of America, probably just like everyone else that followed politics from afar.”

But now, newly elected David Gindi, 49, is not just experiencing a career shift, but is also one of five Republicans in the six-seat Eatontown Borough Council.

The unlikely candidate, formerly a CEO for a wholesale company in New Brunswick,  did not really set out to be a politician.

Moving from the Sidelines to the Front Line

“I tell people, ‘My extent of politics was sitting around a fire pit, drinking beers, and complaining about the job everyone else was doing.’ The conversations would always end up, at least from my perspective, where I’d say, ‘You know what? If I ever got the chance, I would try to do it, and make a change.’”

Gindi never went to party-related functions and, “it was just simply a conversation with friends back and forth. That was basically it.”

Up until eight months ago, there was never really an opportunity to make that change, and Gindi never actively sought out that opportunity. “As a side note, I think that’s an overall issue with voters. People want change, don’t like the way things are, but won’t make the effort to go out and cast the vote to change the thing.”

But when Gindi did toss his hat in, he felt strongly that government on all levels was meddling too much. One of the things that pushed him to step forward was when his neighbor, “had one of the roughest times I can imagine a person having, to deal with putting a shed on his property,” Gindi said.

“I found it to be the most ludicrous thing a person had to go through. He wasn’t putting it anywhere [other than on his own property] and it certainly was not an eyesore. The amount of money he spent to do this, and the town still rejecting him, was unsettling.”

And so, Gindi decided to become involved on the political level where he could affect real change for locals, be it with properties, property taxes, zoning, infrastructure, or helping businesses thrive.

“The mayor and the council have a lot of access to these things where they can make things right for the residents in their towns. You start moving up the ladder of politics, and it becomes like eating soup with a fork. You can want to eat it all day long, but you are never going to get it into your mouth,” Gindi said.

Then, there were property taxes, another sore spot. “A very big issue I have with that is the town and government using an assessment process that allows them gains on unrealized appreciation on peoples’ homes. I want to strip the entire assessment process out of how our town generates revenue,” Gindi noted.

Helping Residents Improve Their Homes Without Being Penalized

“I believe people will start pouring money back into their homes, helping with beautification. Because people said to me, ‘I would love to improve my house, but I just don’t want to be reassessed for taxes.’”

An example Gindi gives is an individual with an unfinished basement, who refuses to get it finished, due to the fact that “home improvement” will increase his property taxes.

“Why should the government get the benefit of his investment into his home? Why should he be penalized for working on his house?”

While canvasing, many questioned Gindi’s bona fides as a resident. He has lived in the town for four years, but he said the area has been home for him for over forty years.

“In Eatontown, I grew up going to the local mall. We skated at the Eatontown Roller Rink. This isn’t the kind of area where you stay in your town and don’t visit neighboring towns.”

“In our town, there is a lot of potential redevelopment. The Monmouth Mall, which is currently a $4 million tax ratable, is currently in court fighting their taxes and looking for an abatement because of Covid and because there are residents suing to block any redevelopment. You can’t even begin to imagine the tax ramification on everyone in the borough if they get their abatement. That’s going to be a major pressure on the town and residents. So, we need to sit down with the developers, town leaders – both on council and non-elected citizens – and get together on a plan that works for everybody,” Gindi noted. “Then, we also have the redevelopment of Fort Monmouth, what is referred to as Parcel B, which I think is about 190 acres that’s open for purchase and redevelopment. If that happens, the town will be open for more business and new families.” 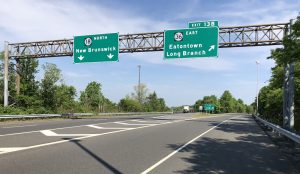 In that regard, Gindi believes the town ought to be more of a “destination,” than “just a place people drive through,” and he hopes his efforts can be part of the solution.

“With the local mall in disarray, a lot of residents will go somewhere else to shop. My daughter, for example, would rather drive the thirty minutes it takes to get to Freehold than go to Monmouth Mall, because it’s a horrible place to shop,” he noted.

“Where we are located on the Jersey Shore is central. Around us are towns that are drawing dollars into those towns, and making Eatontown a pass-through town. When you get off the Garden State Parkway, you have to drive through Eatontown. The problem is, they will continue going East, or they will head south to the Ocean Neptune area, where all the major retailers are continuing to set up shop. Or they will head north for luxury shopping.”

Gindi is ready to hit the ground running, ready to make a difference, brimming with a fire in his belly. What Gindi is most looking forward to is the opportunity to help bring the area back to life, and to moving forward after COVID-19.

“It’s a great town. The potential is phenomenal,” he said. “It’s exciting to be able to bring some new, fresh ideas to the table, and work with people who will embrace them, and help get them over the finish line.”