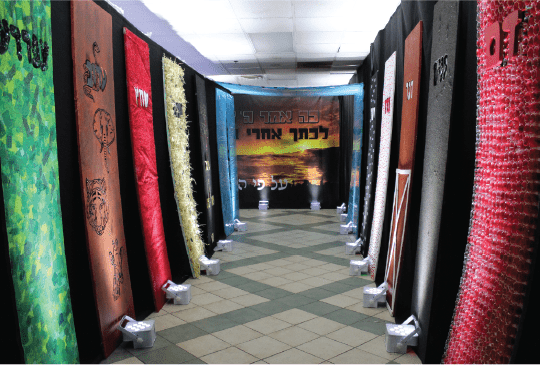 Walk through the Arch of Bitachon in Bet Yaakov of the Jersey Shore and you will enter a world that depicts Hashem’s people holding on tightly to Him, growing through challenges, and coming out stronger and better.

The students at Bet Yaakov of the Jersey Shore, guided by their teacher, Mrs. Miriam Muller, created a world-class Expo, that amazes visitors. Untold hours were spent creating, planning, organizing, drawing, building, and putting the final touches on an extraordinary Expo, which focused on the middot of bitachon and emunah. While working on the Expo, the students felt they strengthened these middot in themselves, too! The project worked especially well in this close-knit school where teamwork came naturally, as everyone feels like part of a family.

The students served as tour guides, leading groups through the Expo. Each girl served as a docent, so they all got a chance to speak and to shine.

The Expo was divided into four main rooms. One room depicted the bitachon and emunah the Jewish people had during the Holocaust. Another room focused on the Jews in the midbar after leaving Misrayim. A third room featured the “natural” miracles that are part of the world. And the fourth room showcased the farmers in Eres Yisrael this year during shemitta.

The students cleverly integrated different materials into all of the exhibits. For example, the sign of the makka of shechin was made with bubble wrap, which looked like boils. The sign with the words “Ve’emunatecha Balaylot” in the Holocaust room was made out of ashes and candle drippings.

Considerable thought and sensitivity went into creating the Holocaust room. The soulful tune of “Ani Maamin” played in the background. However, visitors were left with a feeling of hope, viewing the beautiful wall that depicted the many yeshivot that were built following the war, with the words “uv’chol zot shimcha lo shachachnu” as the title. Yes, we suffered unimaginable torture, but despite that – “uv’chol zot,” we did not forget Your Name – “shimcha lo shachachnu.”

The room that depicted the midbar was incredible. A walkway featuring the Eser Makkot was at the entrance to the room, followed by Kriyat Yam Suf  and the Ananei Hakavod – a large edifice made of thousands of pieces of cotton!  Miniature tents rested on a floor of sand with little pieces of “mann” in front of the door of each tent. There was a true-to-life ancient jar, the Sinsenet Hamann, which has encouraged generations of Jews, including the BYJS students, to recognize how our parnassa is as assured, just as the mann that fell gently in front of the doorsteps of the Jewish people in the desert. There was a huge banner made of thousands of pennies depicting the similarity of the words “mann” and money!

A beautiful d’var Torah was hung near the tents. It conveyed that life was much happier in those times when we all got the same portion of mann (“omer lagulgolet”) so the competition and jealousy that we suffer from in today’s society were nonexistent.

The shemitta room resembled a real farm in miniature, with dirt covering the floor surrounded by a picket fence. An incredible video was shown depicting a miracle that happened to the courageous keepers of shemitta in the past cycle.

This project has served as a great inspiration for the Bet Yaakov students and the community women and girls who viewed it.  The magnificent displays were a testament of the talented leadership, organization, and hard work by the students and staff of Bet Yaakov who happily put their all into this project.