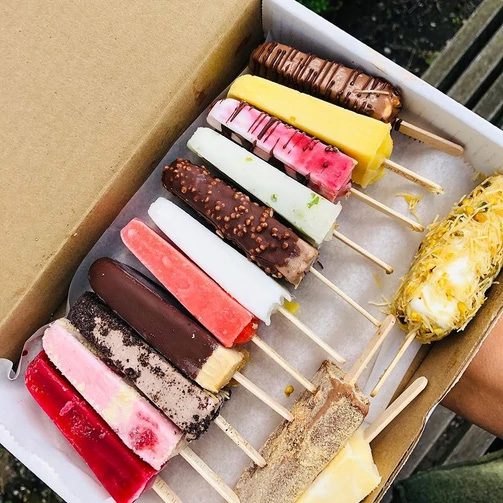 “My parents were my role models, my life and business guides, and always fostered spirituality.”     ~~ Sophia Cohen ~~

Just five minutes into our interview, I could already feel Sophia’s warmth and energy. Her robust work ethic, modeled by her parents, came through clearly as she spoke.

Sophia, the founder of Urban Pops, is the daughter of Beverly and Sammy Ifergan, zichronam l’beracha.  Sadly, they passed away 16 months apart, about five years ago.  Beverly, of Syrian descent, met her Moroccan-born husband, Sammy, in the U.S.  Sophia is the youngest of three children, and has a brother and a sister.

“I was friendly and chatty, always on my rollerblades. My mother ‘let me be’ and encouraged me to do the best I could academically.”

As I listened to Sophia tell her story, I heard her thankfulness for the positive life lessons she learned from her parents.

Sophia was a working woman from a young age.  Taking summer retail jobs during high school, she discovered that she was a natural at sales and possessed innate people skills. Sophia credits her father, a”h, for mentoring her. “He had a good relationship with all the fashion houses and after graduation, he helped me get a three-month internship at Versace, my first real job. It was a real learning experience to say the least.”

After high school, Sophia was itching to work and to earn a salary.  One of her first positions was at a stylish eyeglass optique, the Alain Mikli Boutique on Madison Avenue.  “I typed up a resume, got dressed up, went into stores before closing time, introducing myself and distributing resumes.”  Due to her eager-to-learn attitude, she was assigned financial tasks as well as sales.

Sophia firmly believes that a solid work ethic is more important than sharpening one’s entrepreneurial skills.  “Being ethical is my badge.  Before becoming an entrepreneur, you must learn how to work: that means showing up dressed appropriately and on time, acting respectfully, knowing when to talk, when not to talk, and displaying resourcefulness. It’s about character building.  My Versace internship taught me that we grow by being challenged and making mistakes.”

After attempting the college route, Sophia recognized that she had already shined in sales and networking and so she decided to choose the business path.

Sophia’s position with M. Hidary & Co., Inc., an apparel wholesaler, was life-changing.  Hired as a sales assistant, she advanced to a full-time sales representative with her own accounts and territories.  Sophia consistently demonstrated initiative in all her roles, and that quality helped her move up at M. Hidary.  She always strived to go above and beyond. Seeing that, her  managers allowed her to make cold calls to potential clients. Sophia developed relationships with these companies and at 21 she was sent on her first sales trip to Boston.  That assignment later generated millions of dollars in sales.  Sophia matured and thrived in her four years at M. Hidary.

“My father was hugely instrumental in those years.  He gave me the best advice and celebrated my accomplishments with me.”

And Then Came Marriage

Sophia was happily growing her sales career when her naseeb, Gary Cohen, entered her life in 2004. The couple have six children: Beverly, 16, Isabella, 14, Ruby, 11, Albert, 8, Leah, 6, and Sammy, 3. They attend Yeshiva Derech Eretz.

Keeping those balls in the air and juggling her sales career while raising young kids was no easy feat.

While pregnant with her first child, Sophia decided that the fast pace and travel schedule at M. Hidary was no longer a good fit for her. She did some administrative work locally after Beverly was born. Sophia accepted an offer doing sales for a NY accessories firm following Isabella’s birth.  “I felt reinvigorated being in sales again. I left after two years when I became pregnant with my third child.”  After Ruby’s birth, Sophia sold corporate catering for Circa and created business connections with major Jewish and secular organizations.

At home, Sophia advocated eating natural foods and healing through using natural products.  Her focus was always preparing foods that contributed to her family’s physical and mental health.

The seed for Urban Pops was sown in the summer of 2012, when Sophia saw a recipe for ices. She struggled to give her kids a fun but healthy treat. Her solution?  Ices made with simple syrup.  Corn syrup was the culprit to avoid.  Simple syrup is made by dissolving sugar in water.  Sophia added fresh fruit and made sorbet that the family loved!  The next summer, Sophia was at a Brooklyn street fair with her mother and saw a kosher lemonade stand.  The ingredients the vendor used were kosher lemon juice and simple syrup.  Sophia thought, “I bet I can turn those ingredients into ices.”

She made lemon ices for Shavuot, perfect for the hot weather.  The whole family had doubles and triples and couldn’t get enough.  Sophia then started experimenting with different fruits.  Kids were lining up around the block to taste her ices.  Her sister Alexis urged her to sell her amazing ices.  Sophia credits Alexis for giving her the confidence to launch Urban Frost (the original name), by posting her products on Instagram and helping her sell quarts of sorbet locally.  With Gary’s good palette, he became the taste tester.  A few weeks in, Sophia found it too overwhelming and took a break from the endeavor.

About a month later, a friend in Sophia’s Zumba class asked to order ices for the holidays and she agreed.  But Sophia had a different idea! As Gary was taking down their Sukkah, she poked her head out the window and asked, “Would you mind if I bought an ice pop mold and an ice pop book on Amazon?”  Gary said yes, and Urban Pops was born. Sophia pivoted from quarts of sorbet to pops!

Sophia made pops with different flavors and unique names such as Strawberry Smash and Coconut Crush.  Her goal was to make as many of the ingredients from scratch, adding just the right amount of sugar to avoid the ices being too bitter or too sweet.  She posted pictures of the pops on Instagram, took orders, and sold out weekly.  The word spread fast. But Sophia and Gary were still employed at their respective jobs! She would come home, feed and put the kids to sleep, and then they would make ices until the wee hours of the morning to fill orders.

“Gary was my taster and partner from the very start. We partnered beautifully in making Urban Pops a reality.”

Sophia is convinced that they were blessed with the business when she gave birth to Albert, their first son. She remembers Gary telling her right after he was born, at 6:15am., “Mabrouk! We have a boy, and now I am going to Deal to deliver all the orders.”

Sophia described the differences between herself and Gary and how well they melded. “I tend to jump before I look, get nervous, and panic quickly, but I do bring my best game if I have a good instinct.  Gary is calmer, more grounded, and his emunah is so strong. He balances me out.”

The couple eventually left their jobs, started selling wholesale in addition to retail, expanding to Deal, the Sephardic Community Center, Five Towns, and Lakewood. When Gary joined Urban Pops full time, they were able to consistently improve business logistics and make the business run more efficiently. They were elated when they procured a permanent spot at SCC in 2015.  “Our community grew us into a business. There is no community like ours!”

The early days included finding enough popsicle sticks and making their own toppings. Discovering dry ice was a big win.  Sophia is proud of her Instagram marketing including her first successful contest for followers to post selfies eating Urban Pops. “I don’t know how we did it.  When we made pops at home, we filled our orders all through the night on Thursday, and they were picked up after our kids went to school on Friday.  My mom cooked our Shabbat dinners in our house on those hectic Fridays.  We opened a concession in Allenhurst in our third summer and there was a huge hype about our pops and the cool flavors. I am the face of the business, but Gary deals with everything underlying it! The manufacturing, the office, the paperwork, and deliveries. He didn’t go to business school but figured things out as he became a business owner and grew the company.”

Sophia talks to her children about being blessed to attend yeshivah.  “The reason our community is so successful is that our Torah and traditional values provide a tremendous foundation, work ethics, and interpersonal skills.  We live and breathe them as a couple, a family, and in business.”

Sophia’s passions are family, health, and business.  Natural and clean are #1 when it comes to her children and to Urban Pops.  Sophia exercises daily for self-care and grounding.

Be prepared to take risks, go with it, have emunah, and remember where it’s all coming from.

Ellen Geller Kamaras, CPA/MBA, is an International Coach Federation (ICF) Associate Certified Coach.  Her coaching specialties include life, career, and dating coaching.   Ellen works part-time as an entitlement specialist at Ohel Children’s Home and Family Services. She can be contacted at ellen@lifecoachellen.com (www.lifecoachellen.com).