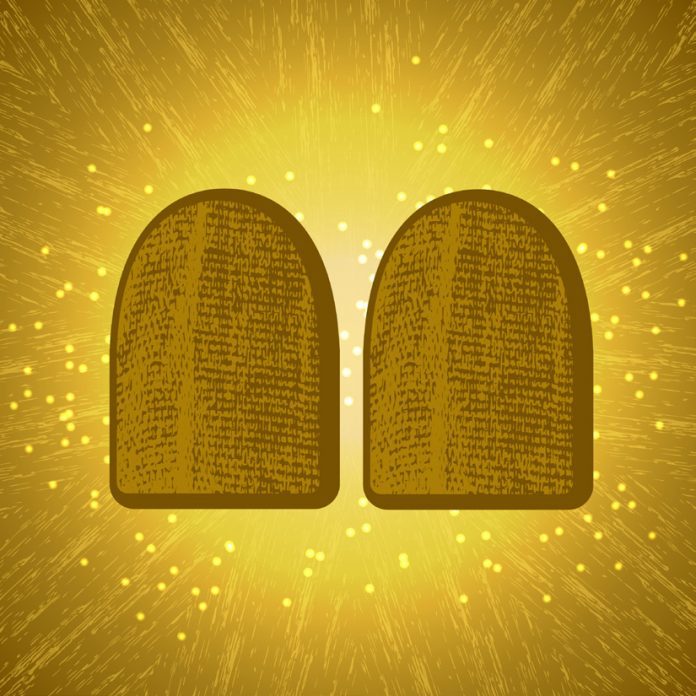 Imagine a businessman gives an important package to his assistant, and instructs him to urgently deliver it to the person whose name and address are written on the front.  The delivery boy takes the package, goes to the address, knocks on the door…and is told that the intended recipient had moved, and no longer resides at that address.

Figuring that the job can’t be done, the employee takes the package and throws it into the trash.  He then returns to his boss, who asks him about the package, and he explains that the recipient no longer lives at that address, so he threw the package away.

The boss responds by congratulating him for a job well done, and enthusiastically praising him for being the best employee he ever had.

Does this sound reasonable?

This story has been told to serve as an analogy to Moshe and Gd’s responses to het ha’egel – the sin of the golden calf, one of the most upsetting stories in the Torah, which we read this month.

After spending forty days atop Mount Sinai receiving the Torah, Moshe came down the mountain with the stone tablets, the symbol of Gd’s covenant with Beneh Yisrael.  Moshe saw the people worshipping a graven image, and he promptly threw the tablets to the ground, shattering them.  The Gemara (Shabbat 87a) comments that Gd later told Moshe, “Yiyashar kohacha sheshibarta” – roughly translated as, “Good job for breaking the tablets!”

In the closing verses of the Torah, after telling of Moshe’s passing, the Torah emphasizes that there never arose a prophet as great as Moshe, noting his unparalleled accomplishments which he achieved “in view of all Israel.”  Rashi explains that this refers specifically to one of the countless things which Moshe did over the course of his 40-year career as our nation’s leader – breaking the tablets.

The final words of the Torah, which summarize Moshe’s singular achievements, speak of his breaking the tablets which Gd gave him to bring to Beneh Yisrael.

Is this not the story of the boss and his assistant?

Moshe was assigned a job – to bring the tablets to the people.  He saw that the people weren’t “available” – they were not spiritually prepared to receive them.  Shouldn’t he have brought them back to Gd?  What right did he have to shatter them?  And once he did shatter them, why would Gd congratulate him for it?  Finally, why is this considered Moshe’s “signature moment,” the achievement that embodies his eternal legacy, memorialized by the final words in the Torah?

The Vilna Gaon (Rav Eliyahu of Vilna, 1720-1797), in his Imreh Noam commentary to Masechet Berachot (32a), offers a powerful explanation.

He compares the luhot (tablets) to the ring given by a groom to his bride under the hupah.  This ring is not just a piece of jewelry.  It is a symbol of their bond.  As long as the wife wears her ring, she is considered as holding onto her beloved husband.  The ring’s presence on her finger represents her husband’s presence in her mind and heart, even when they are not together.  This was the function of the luhot.  Their presence among Beneh Yisrael signified their permanent bond with Gd.

This is why Moshe refused to give the tablets back.  He knew that as long as they were with Beneh Yisrael – even in the form of shattered chards – their bond with Gd was intact. Moshe was intent on maintaining this bond even after the tragic failure of the golden calf.  He refused to give up on his people – and He wanted to ensure that Gd wouldn’t, either.

The Vilna Gaon explains on this basis an otherwise mindboggling passage in the Talmud (Berachot 32a).  After Gd informed Moshe of the sin of the golden calf, He said, “And now, leave Me alone, and I shall be incensed at them and annihilate them” (Shemot 32:10).  Commenting on the unusual expression “hanihah li” – “leave Me alone,” the Gemara writes, “If the verse was not written, it would be impossible to say it – this teaches that Moshe grabbed onto the Almighty like a person grabbing his fellow by his garment, and said to Him, ‘Master of the world!  I am not leaving You alone until you pardon and forgive them!’”  At first glance, this seems impossible to accept.  How could Moshe possibly “force” Gd to do anything?

The Vilna Gaon explains that the Gemara here does not mean to say that Moshe grabbed Gd.  Rather, it means that Moshe grabbed the luhot, refusing to give them back.  Instead of returning them, he insisted on keeping them.  This is why in the Book of Devarim (9:17), when Moshe recalls the events of the golden calf, he says, “I grabbed the two tablets and threw them away from my two hands.”  Moshe emphasizes that he “grabbed” (“va’etpos”) the luhot, even though he was, quite obviously, already holding them.  The explanation is that Moshe refused to give them back.  He held onto them, insistent on maintaining the special bond between Gd and His nation.

Of course, Moshe shattered the tablets, to reprimand the people and show them that their relationship with Gd was now in tatters, and needed a long process of healing and repair.  But he was not prepared to give up on this relationship.

This explains why the Torah extols Moshe’s greatness specifically by alluding to this incident.  This was, indeed, Moshe’s greatest moment.  If not for this decision to break the luhot instead of returning them to Gd, the relationship between Gd and His people would have been lost forever.  It was specifically through this act that Moshe succeeded in preserving this eternal bond, and ensuring that, after a process of repairing the “shattered” relationship, Beneh Yisrael would forever remain Gd’s special and beloved nation.

This also sheds light on the Gemara’s teaching (Baba Batra 14) that the broken chards of the original tablets were stored inside the ark together with the second, permanent set of tablets.  The fact that the broken tablets were able to remain in the sacred ark along with the second tablets proves that their value was not lost, that they remained holy and precious.  Their presence in the aron provided clear, incontrovertible testimony that the bond between Gd and His nation can never be ruptured, even when it is strained.

The Broken Glass at the Hupah

There is a time-honored custom, observed by virtually all segments of the Jewish world, to break a glass under the hupah during the wedding ceremony.  The common explanation of this practice is that at this moment of immense joy, amid our festive celebration of the establishment of a new Jewish home, we take a brief moment to show that our happiness cannot be complete due to our nation’s state of exile.  As the bride and groom set out to build their home, we remember that Gd’s “home,” the Bet Hamikdash, remains unbuilt.

However, some commentators suggest a much different – and startling – explanation of this practice, claiming that the breaking of the glass commemorates Moshe’s breaking the luhot.  At this sacred, sublime, euphoric moment, we recall, of all things, Moshe’s decision to shatter the stone tablets in response to the tragic spectacle of the worship of the golden calf.

What could possibly be the connection between the breaking of the tablets and a Jewish wedding?  Why would we want to bring to mind one of our nation’s gravest failures – the golden calf – while celebrating the glorious occasion of a marriage?

In light of what we have seen, a clear answer emerges.  Specifically at this moment, the bride and groom are shown what eternal, unbreakable commitment is.  They are reminded of how Moshe Rabbenu refused to allow the Jewish People’s everlasting bond with Gd to be permanently broken.  They are taught that even when the relationship might suffer a serious blow, and it resembles the shattered luhot, it can be repaired.  They are taught that just as Moshe did not despair, and insisted that Beneh Yisrael’s bond with Gd is too precious to be allowed to dissolve, so should they approach their relationship as something sacred and precious, and worth preserving even when difficulties arise.

This insight presents a crucially important lesson for all of us, one which is certainly relevant to marriage, but also to all relationships.  Even when a relationship appears to be “shattered,” like the tablets, this does not necessarily mean that it is lost.  Broken relationships can be repaired.  Tensions can be eased.  Conflicts can be resolved.  With strength, determination and patience, as well as the humility to apologize and to forgive, relationships can overcome hardships and be rebuilt.

When a couple gets engaged and married, they are traditionally blessed that their relationship should be a “binyan adeh ad – an eternal bond.”  For a bond to be eternal, it must be strong enough to withstand difficult challenges.  It must be healthy enough to be able to be repaired after a period of crisis.  Relationships will, invariably, be tested and put under strain.  Our blessing to every bride and groom – and to every married couple, at any stage – is that their bond will resemble the bond between Gd and the Jewish Nation, and will endure, grow and flourish despite the challenges that will arise.

We hope and pray that no marriage should ever be rattled like our ancestors’ bond with the Almighty after the sin of the golden calf.  But if it is, the couple should follow Moshe’s example, and try, as hard as they can, to “pick up the pieces” and begin rebuilding so that they can create a beautiful and sacred “binyan adeh ad.”