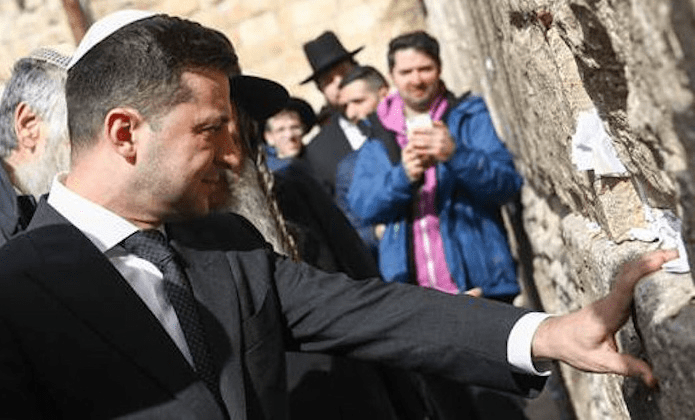 As the war in Ukraine continues, people around the world are rallying around President Volodymyr Zelensky, Ukraine’s unconventional, Jewish, 44-year-old leader. The grandson of Holocaust survivors, Volodymyr Zelensky was born January 25, 1978. He grew up as a native Russian speaker in Kryvyi Rih, the largest city in central Ukraine.

During World War II, the town of Kryvyi Rih was occupied by Nazi Germany. It was home to a sizeable Jewish community, and in the years before the Nazi takeover, many Jews fled eastward. Zelensky’s grandmother was one of the Jews who fled. “My grandmother was living in Kryvyi Rih, in a part of south Ukraine that was occupied by the fascists,” Zelensky explained. “They killed all the Jews who remained. She had left in an evacuation of Jews to Almaty, Kazakhstan. Many people fled to there. She studied there. She’s a teacher. After World II, she came back. That’s where I was born.”

Zelensky completed his law degree from Kyiv National Economic University, but never practiced law. He started acting in college and eventually founded his own production company called Kvartal 95 – “Neighborhood 95” – after the area in Kryvyi Rih where he grew up. He tried his hand at comedy and became a hit throughout the former Soviet Union, performing stand up and acting in some comic films. In 2006, he won Ukraine’s “Strictly Come Dancing” television competition. He has also performed in Israel.

Campaigning for the presidency, Zelensky relied heavily on his comedy background, posting humorous speeches and skits on social media. His unusual campaigning style paid off: In Ukraine’s 2019 presidential election, Zelensky won an astonishing 73 percent of the vote.

His political career was not always smooth. He faced accusations of being close to corrupt figures and was accused of bringing in members of his TV production company to serve as key political advisors. Within days of his election, Russia declared a major provocation, extending Russian citizenship to people living in eastern Ukrainian regions controlled by separatist insurgents whom Russia was backing in Donetsk and Luhansk.

Zelensky responded to this major assault on Ukrainian territorial integrity with humor, posting on Facebook that he would extend Ukrainian citizenship to people in Russia and others “who suffer from authoritarian or corrupt regimes.”

When Zelensky ran for office, the Chief Rabbi of Dnipro told the New York Times: “He should not run because we will have pogroms here again in two years if things go wrong.” Those fears proved misplaced. Indeed, Zelensky was open about his Jewishness. He oversaw an ongoing project to rename streets and monuments throughout Ukraine, erasing the names of Soviet figures and replacing them with Ukrainian heroes, including some Ukrainian Jews.

Zelensky began construction on a memorial at Babi Yar, the ravine outside Kyiv where 150,000 Jews were executed. The Ukrainian city of Uman is the burial place of Rabbi Nachman of Breslov, and is a major site for Jewish pilgrims. On Rosh Hashana, Uman boasts the largest minyan in the world, as thousands of Jews flock to Uman from Israel and worldwide. Under Zelensky’s administration, a large project is underway in Uman. Zelensky stated, “In the city we are starting to construct a ‘Little Jerusalem.’ So, we have decided to construct a historical museum, to create a big park, and to reconstruct the synagogue [that Rabbi Nachman prayed in].”

In the first hours of the Russian attack on Ukraine, President Zelensky vowed to remain in Kiyv, Ukraine’s capital. On a video hastily recorded on a cellphone, he declared, “We are all here. Our soldiers are here. The citizens of our country are here…We are all here protecting our independence, our country, and it will continue to be this way. Glory to our defenders. Glory to our heroes. Glory to Ukraine.”

The eyes of the world stay glued to Zelensky and the Ukraine. Vladamir Putin did not expect resistance from the Ukrainians and thought his military action would be swift and relatively easy. Putin was mistaken. Tentative peace talks are underway and Zelensky has suggested Jerusalem as a possible venue for negotiations. The world is holding its breath.