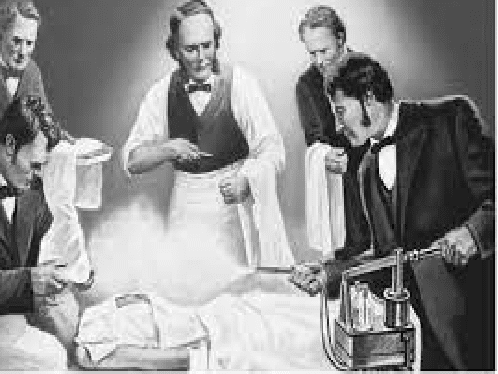 Even in ancient times, people knew about medicine and cures for certain conditions. The Gemara mentions cures for many different maladies, including at least one cure that is more advanced than what medical technology offers today. It describes a type of surgery to remove a brain tumor, involving a drug given to the patient to put him to sleep, and a mixture of herbs that was boiled, cooled, and poured on the patient’s head until his skull became soft, allowing it to be cut open and the growth removed. Two millennia before MRIs and CT scans, medical practitioners had a method for determining the exact location of a brain tumor, and an incredibly detailed understanding of human anatomy.

Unfortunately, many, if not all, of those remedies were specific to that era, and with time, directions for their use were forgotten, as was much of the medical wisdom presented in the Talmud.

The Discovery of Bacteria

In recent centuries, of course, we have seen remarkable advances in the field of medicine. Before the microscope revealed to us the hidden world of bacteria, physicians never imagined that there exist creatures which are invisible to the naked eye.

The first step towards discovering the existence of bacteria was taken by the Dutch scientist Antony van Leeuwenhoek (1632-1723), using an early form of microscope which he helped develop. This was a simple brass plate fitted with a single lens capable of magnifying 200 times. Despite its relatively weak power, it allowed Leeuwenhoek to discern tiny creatures moving within materials taken from between people’s teeth.

But it was only in the second half of the 19th century that the existence of bacteria and their role in transmitting disease was finally verified. The famous French scientist Louis Pasteur (1822-1895) was the most important 19th century researcher of microorganisms and their relationship to various diseases. After discovering the existence of bacteria, Pasteur introduced disinfectant methods into hospitals and clinics to rid them of these invisible menaces. Prior to Pasteur’s work, a single dirty scalpel might have been used to perform multiple surgeries, unwittingly transferring bacteria from one patient to another, thus resulting in an extremely high death rate among surgery patients. No one had previously drawn a connection between the bacteria-laden instruments and patient deaths. After Pasteur introduced his disinfectant methods, patient death rates dropped sharply.

Continuing his research, Pasteur found that heat could destroy harmful bacteria present in cow’s milk. As a result of this discovery, millions of infants previously unable to breastfeed were saved from death, as they were able to ingest cow’s milk. The process he developed was subsequently named after him – pasteurization.

Germs in the Talmud

“A person shall not drink from a cup and then give it to another, because of life-threatening dangers.”

The Taz commentary explains this ruling based on a teaching of the Tanna Rabbi Eliezer:

“For perhaps there is an illness in his body, which might go from his mouth into the cup, making his friend ill.”

Further evidence that the sages knew of the existence of microbes and bacteria may be drawn from the following statement of the Gemara (Avoda Zara 28a), written some 1,600 years ago:

“Shmuel said: An open wound caused by a piece of iron is to be regarded as life-threatening, and one is allowed to violate Shabbat [to treat it].”

Shabbos desecration is permitted only for the purpose of treating life-threatening illnesses, and therefore, treating a simple wound is generally forbidden on Shabbos if it entails a Shabbat violation. However, when a wound was caused by a piece of iron, it should be treated even with procedures that involve Shabbat desecration, because even a superficial wound of this type can be life-threatening.

Brilliance of Our Torah Sages

Did medical experts of the time find this statement puzzling, seeing that it refers to a relatively minor wound? And why is such a wound considered life-threatening?

Today, we know that rusty iron contains bacteria that can cause a tetanus infection, also known as lockjaw, and that the entry of these bacteria into the body through even a superficial wound can ultimately be lethal. The Torah sages knew this before the advent of modern science.

Scientific opinion at the time (and till centuries later) denied any connection between superficial wounds and life-threatening illness. Indeed, before the discovery of bacteria, there was no good reason to imagine that a small wound could cause death. Non-Jewish medical experts would have claimed that the patient died from some previous, internal disease. And undoubtedly, they would not have recommended that a Jew violate Shabbat to treat a patient under such circumstances. Yet, despite the sages’ efforts to preserve the sanctity of Shabbat, they were not ready to accept the current medical opinion in this case. Their knowledge had been passed on from generation to generation, and they knew that a wound caused by iron could be life-threatening. Appropriately, they gave practical instructions to treat such a wound, big or small, on Shabbat, even if this required desecrating Shabbat, as it could cause a massive lethal infection. Eventually, scientists reached the same conclusion through their research.

Even more astonishingly, there is reason to believe that our sages were aware of the concept of pasteurization – the use of heat to destroy bacteria.

The Gemara (Chulin 84b) emphasizes the importance of drinking liquids only after they have been boiled:

Rabbi Yochanan warns that drinking a cup of non-boiled water poses greater danger than drinking a witch’s brew. We must remember that at the time, water was drawn primarily from wells and cisterns and did not undergo the standard purification processes performed today.

Another story told in the Gemara (Bava Metzia 83b) demonstrates that the sages of the time also understood the importance of maintaining strict cleanliness during surgical procedures. Rabbi Elazar, the son of Rabbi Shimon ben Yochai, underwent an operation, whereby “he was given a sleeping draught, taken into a marble chamber and had his abdomen opened…” Note that the surgery was performed in a marble-lined room, which is easier to clean and keep dust-free. Undoubtedly, a special chamber had been designed to maintain the highest level of cleanliness, provide the proper environment for the surgery, and prevent the patient’s body from infection.

Thus, the sages have said: “Probe into the Torah over and over” – that is, examine it again and again as deeply as possible – “for everything is in it – for all that you need, you will find there.”

It is quite remarkable that through the study of the Torah, our sages that lived some 2,000 years ago, already knew the following:

* These invisible creatures, now called bacteria, can cause the transmission of infectious diseases from one person to another.

* Bacteria are present throughout the sick person’s body – including in bodily secretions, like saliva – and not only in the affected organ.

* We should therefore be careful not to drink from someone else’s cup, in case he is sick and the bacteria in his saliva prove contagious.

* This applies regardless of whether the person is healthy or not, for a person may carry bacteria that do not harm him, but can be dangerous to other