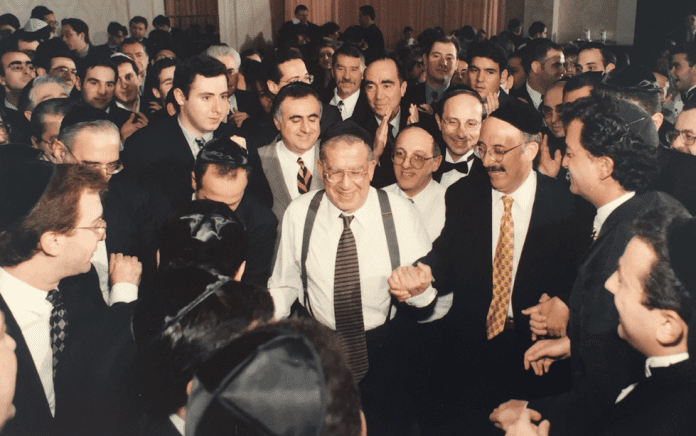 An Inside ArtScroll interview with Rabbi Meyer Yedid upon the release of the biography of his father, Hacham Yom Tob Yedid, zt”l

Rabbi Yitzchok Hisiger: There’s so much to talk about in this book. It encompasses so much history, your father’s fascinating life, his strength of character, and how he raised a community. Can you give us a brief background of who he was?

Rabbi Meyer Yedid: My father was a great man. He had a history different than most rabbis these days. He was born in Aleppo, Syria, at a time when the community had thousands of families, but people were starting to move out to the West. Even at a young age, he connected to Torah learning and stayed in the bet midrash. It wasn’t very popular for a young man to stay in learning, but he did. His entire family eventually moved to Israel, but he stayed alone. He continued learning with his rebbi, Rabbi Moshe Tawil. He had a strong mind and dedicated himself to Torah Learning.

Rabbi Hisiger: Where were you born?

Rabbi Yedid: I was born in Syria, but 50 years later. My father wasn’t really a person of words. He never spoke much about where and how he grew up. So this book really opens up the history, not only of his life, but of the community’s. Even for someone like me who was born there, I didn’t really know most of it until I read the book.

Rabbi Hisiger: The author, Mrs. Devorah Gliksman, worked five years on this book. It’s not just a documentation of his life. It’s about the entire community in this very specific time period. There’s so much intrigue and drama, and as the reader goes from page to page, they won’t want to put it down.

One of the things that I noticed in the book is that your father was a loving, caring person, but he was a real “kana’i.” Did you know him as that tough, strongminded individual?

Rabbi Yedid: With his family, he wasn’t really like that. You saw that he was strongminded, but he really let us be. I always tell my chassanim that my father got involved in our lives when we were young, but once we got married, he was hands-off. He never told us what to do. Looking back, that was part of his chochmah. He understood that it’s important to take a step back and let us find our way.

Rabbi Hisiger: I think that’s even more incredible to hear, because as you read the book, you see that he clearly possessed an unbelievable strength of character to stand up and do what’s right, even when he was alone in Syria. You are a rabbi today of Shaare Zion, a large congregation, Can you imagine doing some of the things he did?

Rabbi Yedid: Most definitely not! You have to remember that it was a different world and a completely different community. One man had to run the entire show – the schools, shechitah, milah, all halachic questions, and so on. It was a tremendous responsibility.

Rabbi Hisiger: You speak about how after your father was niftar, you found many of his writings. How did he do that without many resources in Syria?

Rabbi Yedid: You’re right. They had the basics, but there was no kollel of 100 people learning. It’s amazing that he had the time and ability to write books upon books on every subject, especially with the responsibility of the community on his shoulders.

Rabbi Hisiger: There’s a story in the book about the time your father made a group of students swear that they wouldn’t take an important exam on Shabbat.

Rabbi Yedid: You need to remember that each community back then was completely insulated, and there were standards for how one had to behave. In those kinds of communities, there was such a high level of purity that sometimes you had to give up important things to maintain that.

Rabbi Hisiger: Which part of the new book has given you chizuk in the way you lead your community?

Rabbi Hisiger: For the many people buying the book, what inspiration do you want them to take, aside from the lesson of learning Torah?

Rabbi Yedid: Very often, we get scared to say or do the right thing. We should be sensitive to other people and their feelings, but nothing should hold us back from doing Gd’s will and doing the right thing.

Another lesson to learn from my father is that he truly cared about each and every child in the yeshivah, spending countless hours to ensure that every child could read and know the basics. He wanted to make sure that each one would live a Jewish life. You’ll see that quite a bit in the biography.

The new book, For the Sake of Heaven, published by ArtScroll/Mesorah Publications, is now available at your local Hebrew bookseller and at ArtScroll.com.

Watch the full interview with Rabbi Yedid at Inside.ArtScroll.com.