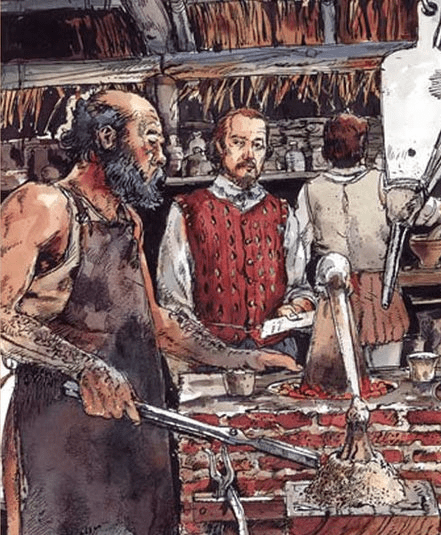 A neighbor of mine in Israel once showed me a very rare certificate – perhaps the only one in Israel – called “Daughters of the Mayflower.” She was a direct descendant of the Pilgrims, who in 1620 sailed away from the religious persecution of Holland to the New World. Indeed, there were a number of Jewish families that sailed to America on the Mayflower, and perhaps many others who hid their Jewish identity as Marranos. But even they were not the first Jews to set foot in North America.

Although there are some people that believe Christopher Columbus, discoverer of the New World, was Jewish – there is no real evidence supporting that.

The first documented case of a Jew to reach the shores of America is that of Joachim (Chaim) Gans, who arrived on Roanoke Island, North Carolina in 1585 as part of Sir Walter Raleigh’s expedition commissioned by Queen Elizabeth. Gans’ story is a fascinating tale that starts in his birthplace of Prague. Joachim was related to the famous historian, astronomer, and talmid hacham, David Gans. David Gans was a student of the Rama and the Maharal, worked in the laboratory of the greatest astronomer of his time, Tycho Brahe, and authored Tzemach David, a chronicle of Jewish history up to his time.

Joachim Gans was a chemist specializing in metals. He most probably learned his trade in the Ore Mountains of Bohemi, which had the most advanced copper mining techniques of the time. In 1581, Gans was offered a position at Queen Elizabeth’s Mines Royal, and within a short time was able to show the English miners how to produce copper by heating it only four times, instead of eighteen. Gans simplified the process by pounding the ore into a powder and then roasting it and passing water through it. In addition to purifying the copper, Gans also used the waste products – namely, copper sulfate –for dyeing textiles. (It could be that Gans got some

of his ideas from the fact that the deyo – ink used by soferei stam – uses copper sulfate, known in halachic literature as kuper vasser.)

The Queen’s Secretary of State, Sir Francis Walsingham, was governor of the Mines Royal and also a substantial investor in ventures to explore and exploit the New World. So, when Sir Walter Raleigh set out to establish a permanent colony in North America, Joachim Gans, whose mining achievements were well known to Walsingham, was the natural choice for the expedition’s metal expert. The Queen was set to receive a fifth of any minerals, gold or silver that was found, and Gans would be called upon to determine if there was any valuable ore in America. And so, in 1585, Gans found himself on Roanoke Island, surveying the area and testing the trinkets of the Indians to see if they contained any gold or silver. Archeologists have found bricks from Gans’ furnace and chunks of copper, indicating that Gans had the capability of smelting ore at a temperature of over 2,000 degrees – enough to melt copper.

One can only wonder what Gans must have felt like so far from home, the first and only Jew in the Western Hemisphere. I imagine him waking up to the crisp Carolina dawn putting on his tallis, while the wild turkeys pecked at his tzitzit, hoping they were some new exotic kind of worm. What did his fellow colonists, a band of English goyim, think when they saw him in his tefillin? And what must the Indians have thought?

In March 1586, Gans participated in an expedition inland to look for minerals. In typical European fashion, the group burst into an Indian village, captured the chief and interrogated him for two days, while taking his son prisoner. The chief told them about marvelous and strange minerals up river. They set out to reach the deposits, but after five days of rowing, the expedition had to turn back, having made enemies of the Indians who could have supplied them with food.

The band made it back to Roanoke Island, but things were not much better there. When the supply ship from England did not arrive, and given the state of war with the local Indians, the leaders decided to pack up and abandon the settlement. In June 1586, the colonists hitched a ride with the great English explorer, Sir Francis Drake, on his way back to England, fresh off his spectacular successes fighting the Spanish in Florida. Drake’s financer was none other than Walsingham, who must have gotten the message to the admiral to pick up the stranded colonists and salvage what he could from his investment.

Though the colony did not succeed in its main goal, Gans was able to report on a land rich with resources of great economic value. This information provided the impetus for England to continue its objective to colonize America, with the next major expedition founding the first permanent settlement of Jamestown, Virginia in 1607.

Joachim moved to London where he continued his work as a scientist. But on a trip to the mines, he got in trouble for publicly giving Hebrew lessons to English gentlemen. Jews had been expelled from England in 1290, and were not officially to be allowed back until Menasheh ben Israel convinced Oliver Cromwell in 1655 to permit them to return. Gans was taken back to London and incarcerated. While in jail, he composed a treatise describing a unique method of producing saltpeter, a major ingredient in gunpowder. His recipe for saltpeter was a translation and explanation of the work of Lazarus Erker, chief of the Emperor’s mines in Bohemia. Ganz dedicated his work to none other than the Secretary of State, Sir Walsingham. This “ransom” seems to have done the trick, as there is no record of Gans being punished in any way. Most probably, he was allowed to return to Bohemia and spent the rest of his life there.