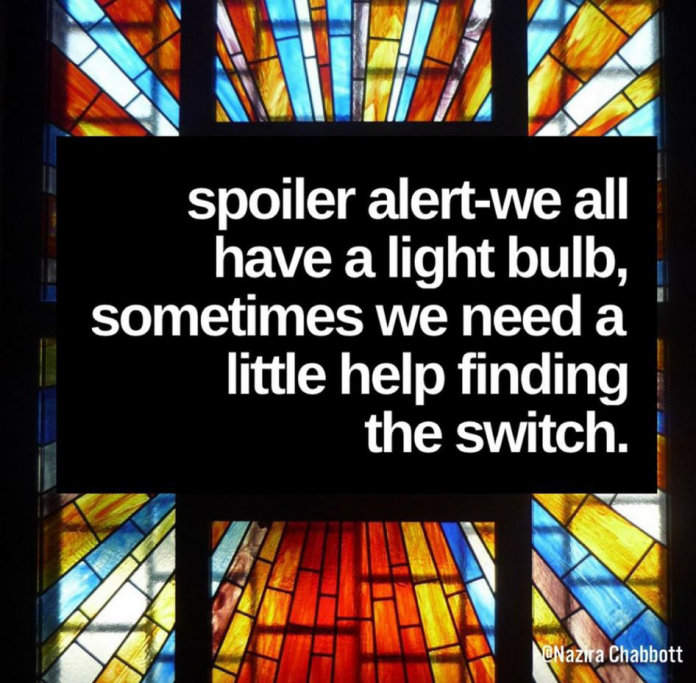 Please meet Nazira Chabbott, daughter of Lillie and Ronnie Ades.  Nazira is a wife, mom, personal success and wellness coach, and laughter yoga leader. Nazira’s paternal grandparents were from Aleppo, Syria, and her mother’s parents were born in the U.S. and Israel.  Nazira was born in Brooklyn and is the oldest of four children. She deeply values her two sisters and brother.

When Nazira was nine, the Ades family moved to Deal, NJ.  Nazira hated the idea of living in Deal.  “I was scared of bugs, and I knew from my summer visits to my grandma in Bradley Beach that there were lots of them.”

The Ades children attended the Deal school for their first year and then their parents transferred them to Hillel Yeshivah.  Nazira was fortunate to have classmates that first year in Deal who she recalls were pretty friendly, and one classmate lived right on her block.

Nazira was a serious child and enjoyed her Hillel years. “I was always thinking about scenarios, experiences, the future, and the past. My relationship to school was dependent on the confidence I had in understanding the work (I was a disaster with anything mathematical), and my friendships.”

The age of nine was significant for Nazira, not only because of her move to Deal but also due to her discovery of creative writing.  Her teachers assigned ten vocabulary words at a time, and Nazira loved creating stories with them.  Nazira the storyteller was born.

When Nazira felt bullied in fourth grade, writing helped her to articulate her strong feelings and allowed her to speak out when she was shy.  “I love the idea of integrating creativity with learning; it makes the subjects that are difficult for me more approachable.”

After Hillel Yeshiva, Nazira studied at Asbury Park High School and at the NYU General Studies program for two years.  She took a year off from college to join the workforce and figure out her career goals.  She began working at one of the first cell phone stores in NJ. “My computer skills were good, and I worked in Accounts Receivable.  Collecting money can be fun!”  After a few years, Nazira ventured into the city for sales work.  Nazira did not enjoy cold calling, comparing it to talking to strangers on the subway. She happily returned to her first job.

Nazira spoke beautifully about her relationship with her husband.  Joe is not only her husband; he is also her friend. He is supportive of her work and passions and respects her goals. The couple lives in Midwood. Their teenage son and daughter attend Yeshiva of Flatbush High School and Yeshiva Prep.

Nazira cherishes her community. She loves how people take care of each other, and she finds great security in this.

When her kids were young, Nazira worked for a company doing accounts payable.  She was drawn to staying at home and realized that her family was her first priority. As her children started spending more hours in school, Nazira took on various creative jobs such as free-lance editing, opening a greeting card business, and writing bar mitzvah speeches.

The name Nazira refers to beauty and radiance in a person’s face.  “K’shmo ken hu,” – he is like his name. This idea (from the book of Shmuel) fits Nazira to a tee. Her face just lights up when she talks about her passions.

Nazira describes herself as humorous, peaceful, spiritual, calm, creative, a listener, and a nature-lover.  As I got to know her, these qualities, especially the humor, calmness, and creativity, all appeared. I would add laid-back and comfortable in her own skin.

I was curious to hear about Nazira’s role models.  She laughingly replied that naming her role models would be something like the Oscar awards. There are so many people who helped her become who she is and still hopes to be, and she has only a few seconds to give heartfelt recognition.

Nazira’s mother has always focused on creativity and kindness and about tikkun olam.  Lillie Ades taught her children that they can make the world a better place.  Her father Ronnie modeled how significant it is to pay attention to someone’s character and be respectful of others.  He also educated his kids about the importance of being a responsible person.

Find Your Breath and Laugh

Nazira has always felt good about her ability to make others laugh.  By sharing observations, she can make a teacher, a doctor, or a co-worker laugh. “We take in so much during the day, we need to laugh.”

It’s no surprise that Nazira is a certified laughter yoga leader and teaches classes to seniors at Sephardic Bikur Holim.  Laugh Yoga (appropriate for all ages) provides a space and permission to laugh and to be playful and helps people fight stress.  “Laughter is good for the mind, body, and soul.  It is laughter accompanied by yogic breathing that allows us to sustain laughter for long time periods.”

Nazira revealed a fact that most people don’t know about her, that she used to have a nervous laugh.

Being a parent – “The humility, perspective, the growth we experience never ends when we have children. We are blessed to be the child, to experience parenting, and hopefully to connect at some point to our parents and to recognize how difficult and trying parts of that learning curve were.”

Maintaining friendships – “I have been blessed to make friends at different stages of my life to where it feels silly calling them friends, because they are a part of me. I am very fortunate to be surrounded by so many awesome people.”

The Path to Coaching

The idea to pursue a career in coaching came to Nazira when she attended a Vision Board class sponsored by Propel and moderated by Alice Chera, a life coach

“I was doing editing work and when I walked out of the class, through the threshold of the doorway, it was a whisper – and I ran with it.”

In 2019, Nazira completed her coaching training with IPEC, Institute for Professional Excellence in Coaching, and is a Certified Professional Coach and an Associate Certified Coach with the International Coach Federation.  Her family is proud of her achievements. Her kids saw how hard she worked when she was in coaching school.

“Coaching offers me the people connection I love along with creativity and writing prompts I pose to my clients. I get to bring the best of everything I have to offer.”

When Nazira talks, it is easy to see that she makes a thoughtful and insightful life coach. Nazira is a pensive speaker, and pauses before she talks or responds to a question.

What really excites Nazira about coaching is helping others find peace and perspective. She particularly enjoys seeing clients gain a new awareness. “It’s like wanting to fly and suddenly realizing that you’ve always had wings.”

Her clients are diverse women from eighteen to middle age. Coaching comes with its  challenges, though. Some people want to hire a coach but don’t fully know what coaches do and do not do.  Coaching reminds her of her job writing bar mitzvah speeches.  The boys had a week to start writing their speeches before she met with them.  Some had an idea and wrote a rough draft of the speech and others would introduce themselves and ask Nazira, “So what are you going to write?”  Even if a client has a rough idea of what they want to work on, or what they need to change in their lives to accomplish a goal, that is a great springboard, but they must commit to do the work.

Nazira launched The Happiness Experiment on August 4th to explore if joy is seasonal and why it seems easier to attain joy in the summer versus the fall.  Nazira strongly believes that we can all achieve the grace to know that we have what we need to feel joy and we do not have to be smiley 24/7.  Joy comes from within as opposed to happiness, which is external.

The first thing Nazira learned when COVID-19 hit was how crucial it is not to panic.  One cannot make rational decisions while panicking.  It is okay to be scared, but try to stay calm.

Nazira loves being in nature, sitting on the beach, and enjoying the ocean.  She plans mini adventures such as hiking in the summer, and she organized a snow tubing trip with two friends this past winter.  Nazira enjoys channeling her adventurous spirit, but she is not a daredevil.

Nazira is finetuning The Happiness Experiment to include different age groups. She may  go back to school to complete her bachelor’s degree.

I leave you with Nazira’s advice for the New Year.  In setting goals for Rosh Hashana, be kind and patient with yourself if your first try is not successful. If we do it for others, we can do it for ourselves.  Stay in the game and do not give up.