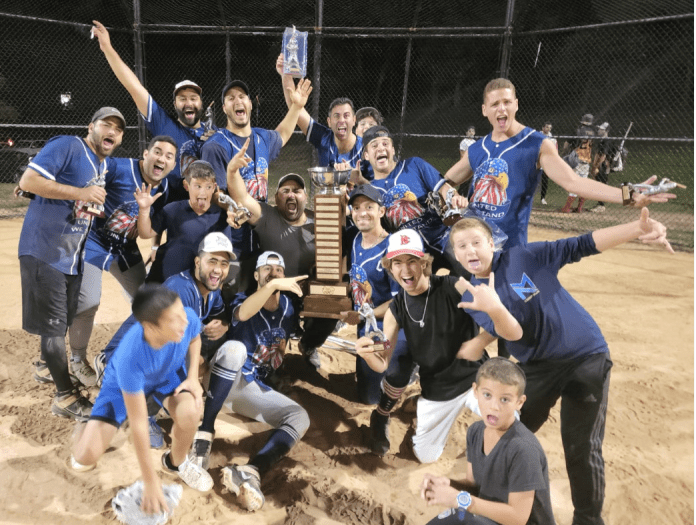 A collision course between the wild card team, Fire, captained by league veteran Ray Esses, and the second seed United We Stand, captained by captain extraordinaire Steven J Gindi, was set. The road to the championship was nothing short of breathtaking for each of these squads.

Led by the resurgence of ace Max Yedid and young slugger David Buca Cohen, Fire was quietly putting together a magical run as they took on the top-seeded Diamond In The Rough and swept them in two gut wrenching extra inning affairs.

As for United We Stand, in similar fashion they too advanced to the World Series, as both games vs. The Baby Bombers ended on the game’s last at bat.

Heading into the series, starting pitcher of United We Stand, Ralph Hanan, was the only starting pitcher in the league’s 15-year history to win multiple championships with two. Max Yedid, who won in 2019, had a chance to tie. The “Hanan vs. Yedid Rivalry” stems back as far as the 2014 season.

After the opening ceremonies, which featured the starting lineups, the ceremonial first pitch, which was thrown by league sponsor Charlie Zeitouni of Zeh Arak, and a National Anthem for the ages, in which co-commissioner Max Sutton sang his rendition accompanied by a world class firework show, the games were ready to begin.

As soon as this game started you could feel the tension in the air and both starting pitchers were dealing. A pitcher’s duel and some great defense had this game scoreless in the bottom of the third. Then Avi Shemueli, one of the steals of the draft, drove in the series’ first run to take a 1-0 lead. In the 4th, Ralph Hanan drove in a pair to give UWS a 3-0 lead. The way Hanan was pitching, it seemed as if that was all they needed.

However, in the top of the 6th, Ike Mavorah drove in Fire’s first run. In the 7th inning, Fire sent up the tying run as Isaac Sasson hits a HUGE double to set up 2nd and 3rd after a walk, with nobody out for Yedid. Yedid promptly delivered a clutch 2-run base knock to tie it up in the 7th. It looked as if Fire was primed to take the lead, but UWS turned a huge double play to escape further damage.

The game went to extra innings, and in the bottom of the 8th perennial slugger Yaakob Seruya delivered the heroics with a walk-off bullet down the left field line to take Game One of the best of 3 series.

United We Stand was now just one win away from taking home the elusive M&S Cup as the 2022 M&S Champions and Fire was staving off elimination. The game’s first run was driven in by Jackie Sutton, as he delivered a line drive to right in the top of the second inning. Jack Bibi followed by a sac fly to give UWS a 2-0 lead. However, in the bottom of the 2nd, Max Yedid tied up the game at two with a two-run single.

In the third inning, rookie Saul Safdie broke the tie with an RBI of his own, followed by another RBI off the bat of Hannan to give UWS a two-run lead. That two-run cushion was short lived, as rookie Aaron Enok cut it to 4-3 with an RBI knock.

In the bottom of the 4th, rookie sensation Albert “Alco” Cohen took away an extra base hit and doubled off the runner with a diving effort to hold on to the lead.

In the 6th, captain SJG came through with a huge RBI double to extend the lead to 5-3. The lead  could have and should have been larger, but Buca robbed Saul Safdieh of potentially a grand slam!

With Fire down to their last 3 outs in the 7th all seemed to be over when Ike Mavorah hit a harmless ground ball. However, UWS misplayed it, and incredibly the game was tied at five, sending the game into extra innings.

In the top of the 8th inning, Alco came up with a huge RBI triple and the flood gates opened as USW took a commanding  10-5 lead.

This Fire team had their backs against the wall all season and showed grit and determination once again. Down to their final 3 outs, they rallied to make it 10-8 after a huge 2-run double by Buca.

With the tying runs on, Fire sent up future Hall of Famer Ike Mavorah, but Hanan and UWS finally secured the series final out to take home the 2022 title.

The World Series MVP was awarded to Yaakov Seruya. He was rewarded with a pair of tickets to an upcoming NY Rangers game, generously donated by league member Teddy Ishak.

M&S would like to congratulate United We Stand on a tremendous season. M&S would also like to thank the sponsors for making the league possible: Zeh Arak and Yeshiva Mil Basin Academy.

In the winter months, M&S hosts the M&SP’Ys – a night where we celebrate the award winners  of the previous season.

To watch all league media please check out the YouTube channel https://www.youtube.com/user/samjsutton and the league Instagram @MandS_Baseball.