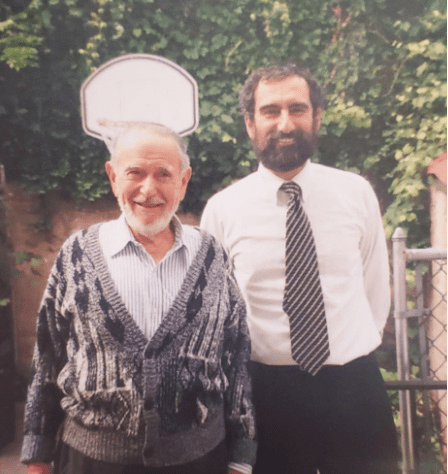 King Solomon describes the Jewish nation as untarnished even though she dwells with the pagans. This description is also apropos for my father.

My father, Edouard Lagnado, zt”l, grew up in Egypt in a traditional home. In 1958 his family fled Cairo. Fate directed my father and his young family to San Diego, California, where he would live for the rest of his life.

San Diego is a beautiful city.  The weather is excellent and the residents are relaxed and friendly. If you are not Jewish, it is a wonderful place to raise a family. In 1960, the Orthodox synagogue did not have a mechitsa, used a microphone even on Shabbat and holidays, but used a traditional siddur. The city had no Jewish school or a kosher bakery. Despite these negative factors, my father decided to settle there.

Many other Jewish families fell in love with the city and created for themselves a new life, but in doing so they sacrificed their attachment to Torah. My father held fast to his Judaism. He made sure that his children had a proper Jewish education. My sisters traveled to the east coast for high school. I was sent to yeshiva in Los Angeles at thirteen. This was unheard of in San Diego at the time. I can imagine the ridicule my parents endured for their decisions. My parents knew what was right, and the scorn of others would not deter them.

The Tzadik of San Diego

My parents determined that my bar mitzvah would not be celebrated in a Conservative synagogue so prayers were held in my aunt’s large family room. The reception was at a major hotel. The food was a beautiful fruit plate, prepared under the supervision of one of the Orthodox rabbis.

My friends complimented the beautiful fruit plate wondering what the main course would be. I was embarrassed because I knew that was the main course. My shame was short-lived because one of the rabbis spoke about my parents’ commitment to Torah by having a gorgeous party that was 100 percent kosher. The rabbi said my bar mitzvah was a historic event, a first for the city of San Diego – a bar mitzvah that celebrated a young man’s entrance into Torah obligations with only kosher food!

My siblings and I called my father “Pap,” friends called him “Eddie,” business associates, “Mr. Lagnado.” As time went on, what people called him started to change. In shul he was called “Hacham David,” younger congregants preferred, “Baba David.” I pondered what changed, so that my father was looked at as a holy man when I remember him as an unassuming individual, very private in all his ways.

In truth nothing changed, but people started to recognize his devotion to Hashem once he retired. From 65 until his passing no one in Southern California attended more minyanim than he did. Every day he attended prayers for Shaharit, Minha, and Arbit. More times than not he was the hazzan. My father prayed in a Chassidic minyan, and he was the hazzan of choice. The congregation enjoyed his clear pronunciation and his heartfelt kavanah. Immediately after prayers everyone would leave, and he stayed to learn a little. After a while most of the men started to stay, too, and the rabbi engaged them in a class.

My father made friends easily. When he reached his 94th birthday he began to need help from his friends. My father’s apartment was on the third floor, and it became difficult for him to bring the shopping or the laundry up the stairs. His friends were always there to help. Once I mentioned how much I appreciated all that, his friend replied, “Moshe, your father is a holy man, and this apartment is a sanctuary. Some people go to synagogue to find a holy place. I am telling you there is no holier place like this apartment in all of San Diego.”

My father’s memory, with Hashem’s help, will live on with all who knew him. May his blessed memory  serve as a tool for all of us to follow in his ways. Amen.