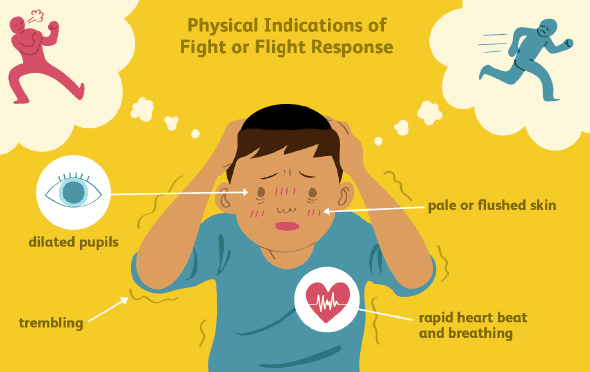 What Causes Ordinary People to Have “Superhuman” Powers During A Crisis?

I was walking to a friend’s house late one Friday night when I heard a rustling in the bushes. I looked toward the shrubs and saw…a rat. I can’t say I jumped. I can’t say I ran. It was like being zapped with an electric shock. I suddenly found myself 15 feet away with my heart pounding and blood racing.

What I experienced was the “fight or flight” response. When in danger, our bodies switch into emergency mode, and we get a surge of energy that allows us to perform feats of strength well beyond our normal limits. The stories are legendary. A fireman lifts a burning beam that supports an entire wall. A climber trapped under a 1,200 lb. rock shoves it down an embankment. A mom lifts a car, freeing her trapped child. Feats of strength that under normal circumstances would be impossible.

While we recognize the adrenaline rush that brings on this state, the actual process is simply astonishing.

Understanding the “Fight or Flight” Response

Because the “fight or flight” response engages almost every organ and system in the body, the complexity of the operation is baffling.

At the first hint of danger, early warning signals are sent to the brain via the optic nerve to the fear center, the amygdala, which prepares the body for action. If the danger is confirmed, the disaster center in the brain jumpstarts the body. Nerve impulses are fired down the spinal cord to the adrenal glands just above the kidneys. The glands flood the bloodstream with adrenaline, which boosts heart rate and blood pressure. Blood now races to the muscles. Adrenaline also signals the liver to flood the body with glucose. Blood is shunted away from the digestive tract and other non-life saving areas so more will flow into critical areas. The lungs are signaled to breathe more quickly and deeply, injecting more oxygen into the blood. The metabolism is quickened. The senses are all on high alert. The mind is hyper-focused. The body is primed – ready to lift, run, or fight.

But this isn’t enough. In a life-and-death situation, milliseconds count. The body must respond immediately. And what kick-starts the sprint to safety or the powerful lunge is instant energy stored in the muscles.

Long in advance of an emergency situation, the body stockpiles energy – much like a high-energy battery – in the form of ATP, an energy molecule produced by burning glucose or fat. An emergency supply of ATP is housed in the muscles, ready to turbo charge us on demand. For a few seconds, that energy burst can turn a middle-aged man into an Olympic sprinter or a housewife into a power lifter. The supply only lasts about four seconds; then it is consumed. But during that time, we are able to perform superhuman feats of strength, pushing the body well beyond its ordinary limits.

The dazzling part is that it’s automatic. It usually happens before our conscious mind even recognizes the danger. One minute you might be calmly walking down the street, not thinking about much, and then in an instant – the eyes see, and the brain responds. In a flash, a mild-mannered man is transformed into a superhero ready to save the day.

Actually, there’s even more going on behind the scenes…

We normally think of our senses in simplistic terms. We see. We think. We hear. We feel. We taste. But what’s actually going on is far more involved. Our brain is taking in sensory input and processing it, making sense of what we are experiencing. To do that, it decodes, assembles, and then compares images that have accumulated over a lifetime. It then puts it all together into one composite, and brings us a coherent version of the world. The steps involved in this process are remarkable.

Let’s take vision as an example.

When I looked at the bushes and saw that rat, what actually happened was this: First, I heard a rustling sound, and then turned my head to see what it was. The lens in my eye automatically adjusted to focus on an image. That image was projected onto the retina in the back of my eye. Cells in the retina converted that image into electrical impulses, which were sent along the optic nerve into my brain for decoding and deciphering. The question being: What is that object? Is it real? Is it a threat?

Then began the process of perception. Each second, a billion items of information are sent through the eye. Initially, everything that enters is a blur, with an untold number of patches of light and dark, contours, and lines. Information is then sent to different regions of the brain to piece together the images, refocus the eye for greater detail, and then interpret what it is that I am looking at. To do this, the supercomputer we call the brain must go into high gear.

The first stop for this raw information is the thalamus, where the initial stages of recognition happen. Here the brain begins to collate and interpret the data, reaching some preliminary composites.

“Let’s see… That object is furry and has big ears and a tail. Hmmmmm… What could it be? It’s clearly an animal, but what kind? Is it friendly or predatory?”

Signals are then relayed to the memory center to access previous visual images. Every image a person has ever seen is burned into a cell. These cells are inventoried by category, emotion, and feelings. The catalogue of these cells is consulted to make a connection. Picture after picture is accessed until some recognitions form.

Since the visual image of a rat was stored with severe emotions attached, it comes back with a red flag, as in, “Watch out! This might be dangerous!”

But not every rat is a threat. It depends on a number of factors. If I’m standing in the zoo, and the rat is behind a two-inch-thick piece of glass, I am not in harm’s way. So, more information is needed.

And so after a person realizes what it is that he sees, signals are sent to the hippocampus to determine context. “Where am I? Where are they? Are they real?”

The answer comes back. “I am standing alone on a dark street late at night. Not good.”

The thalamus then puts it all together. “Rat. Night. Alone. TROUBLE! Immediate action is required!” It then shoots out a signal to the crisis center of the brain: “Warning! Warning! Red Alert! Danger!”

The amygdala, the area that controls strong emotions, is then signaled. It flashes a message to the hypothalamus, which then fires electrical impulses down the spine to the adrenal gland. Thirty hormones are released, sending commands to almost every system in the body. The heart and lungs are sent into overdrive. The brain is flooded with chemicals that focus attention. The pupils are dilated to allow in more light. The veins in the skin are constricted to force more blood to the muscles (causing the familiar reaction of goose bumps). The immune and digestive systems are shut down to allow more energy to the muscles. The liver secretes glucose and begins production of replenishments. ATP in the muscles is released, and the body is ready for peak performance.

From start to finish, how long does this process take?

This is a system of extreme complexity, more sophisticated than the most advanced machines, systems, or factories man has ever conceived. But even at this level, we’re only scratching the surface of what is happening.

When we contemplate such wisdom, we begin to get an inkling of the sheer brilliance and capacity of our Creator.

Mother Lifts Car to Save Her Son

In Georgia, a car jack slipped and caused a 3,000-pound Chevy Impala to fall on top of a young man. Without any assistance, his mother, Angela Cavallo, picked up the car and held it for five minutes until neighbors could pull her son to safety!

In 1988, a helicopter lost control and crashed into a drainage ditch. One of the pilots was trapped under the helicopter in the shallow water. His co-worker  ran over and lifted the helicopter, which weighed more than 1,550 lbs.!

Father Saves His Son From Alligator

In Florida, a huge alligator grabbed a six-year-old boy by the arm and dragged him into the water. The boy’s father, Joseph Welch, began to punch the reptile to make it release his son.  Eventually, with the help of a bystander, the alligator was defeated and released the boy.

In 2006, 41-year-old Lydia Angyiou was walking with her two sons when a 700-pound polar bear approached them. She told her sons to run, placing herself between them and the bear. Then she attacked the bear, kicking and punching it. Fortunately, a bystander had seen what was happening and shot his rifle into the air several times to startle the bear before killing it.