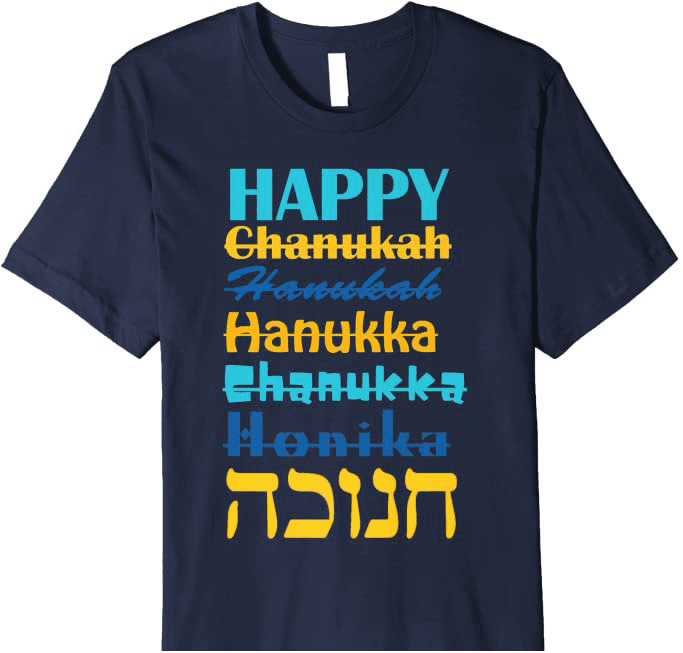 A latke gave his mother a gift.

He replied, “I guess that’s just the way I yam.”

Doctor Morris, who was known for miraculous cures for arthritis, always had a waiting room full of people. Once, a little old lady, completely bent over in half, leaning on her cane, shuffled in slowly. When her turn came, she went into the doctor’s office, and amazingly, within half an hour she emerged walking completely erect with her head held high. A woman in the waiting room who had seen all this walked up to the little old lady and said, “I can’t believe it! When you got here you were bent in half and now you’re walking erect. It’s a miracle!”

The little old lady looked at the woman and answered, “Miracle, shmiracle… they finally gave me a longer cane.”

During World War II, a sergeant was giving his battalion a pep talk. “Out there,” he said, “is your enemy. He has made your life miserable, he is working to destroy you, and he has been trying to kill you every day throughout this war.”

Suddenly, a soldier shrieked, “You mean our cook has gone over to the Germans?”

Late one night David was driving from Tel Aviv to northern Israel, and he stopped at a 24 hour gas station that had a mini-mart to get a freshly-brewed cup of coffee. When he picked up the pot, he could not help noticing that the brew was as black as asphalt and just about as thick.

“How old is the coffee you have here?” David asked the man who was standing behind the store counter.

He shrugged. “I don’t know. I’ve only been working here two weeks.”

A man called his mother in Florida and said, “Hi Mom, I know it’s been a few days since I called, how have you been?”

“Why are you so weak?” the son asked with concern.

The mother answered, “Because I didn’t want my mouth to be filled with food, if you should call.”

Ariel took latkes to school for lunch during Hanukah.

“These,” he told his friend Daniel, “are what makes Jews so smart.”

So, Daniel gave him $25 and then bit into the latke. “Hey, there’s nothing special about this!” he exclaimed.

“It must be working already!” said Ariel.

It was just before Hanukah and the judge was in a good mood as he asked the accused, “What are you charged with?”

“Well, that’s not a crime,” said the judge. “How early were you doing this shopping?”

“Before the store opened,” answered the defendant.

Cooking Tip of the Month

This weekend, I discovered a cooking tip I haven’t seen listed in any cookbooks. While you are preparing the food, and after the guests have arrived, fill the house up with smoke, preferably enough to get at least two smoke detectors going. Then you go rushing about the house, opening all the windows, setting up fans, and generally doing everything short of calling the fire department. Let the guests sit for about half an hour at 90 degrees (as a result of opening the windows) and then serve the food.

The benefit? By this point, you will have established expectations in your guests’ minds that you can’t fail to exceed!

Finally, the first day of school. Moishie was entering 8th grade. He turned to his friend Shloimie to reflect on the year that was to come.

Moishie paused, leaned back in his chair, and said, “Looks like the end of an era!”

What’s the best Hanukah gift for someone who has everything?

Abie and Sammy were walking home from school and began comparing their parents.

“My mom can tell the future,” said Abie.

“Sure” said Abie. “All she has to do is take one look at my report card and she can tell me what my dad will do to me when he gets home.”

A rabbi is trying to raise funds for his yeshiva but is uneasy about requesting money from one potential donor. Finally, he arranges a meeting and says, “I have good news and bad news. Which do you want to hear first?”

The man looks a little nervous and says, “The good news, I guess.”

“The good news is that we have determined that there is more than enough money to support the entire community.”

Confused, the man asks, “So what’s the bad news?”

“The money is all in your pocket.”

We had to have our garage door repaired. The repairman came and told us that one of our problems was that we did not have the correct size motor on the opener. I thought for a minute and said that we had the largest motor that Sears made at that time, a half horsepower. He shook his head and said, “No, you need a quarter horsepower.”

The repair man chuckled a bit, and knowingly began writing numbers on a piece of paper that looked like the beginnings of a calculation. “Let me show something,” he said.

Nervous that I wouldn’t understand a complicated physics equation, I tried hard to concentrate.

“You see,” he explained as he pointed to the ¼ and ½ he just wrote, “four is larger than two…”