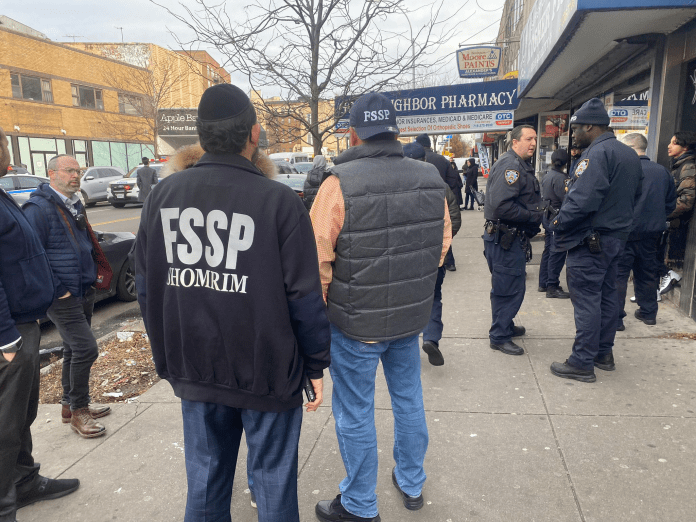 This  past year’s  headlines cited a sharp rise in New York City’s crime rate and mental health crisis in the city. Our citizens feel a growing  fear that our safety is in jeopardy. But, officials and common folk alike are banding together to address these issues.

Bob Moskovitz, the Flatbush Shomrim Safety Patrol’s Executive Coordinator, told Community Magazine, “I joined this organization in 1991. The police cannot be everywhere all the time and the community needed a better response.”

“But at the end of the day, if we don’t have the cooperation and blessings of the NYPD and your local precinct then you cannot go anywhere with a ‘volunteer patrol’ – we must be on the same page.” Explaining how the Syrian community’s initial concerns with the escalating crime wave began, he explained, “Things got really bad around the time Bill De Blasio became mayor. When that happened, the Sephardic community reached out to me and asked if they could become part of the Flatbush Shomrim community.

“We are volunteers, so if we go for a half day of Grand Jury duty, that equals a half a day that we are not paid. We do not carry weapons and are not vigilantes. We do not go beating people up. Our eyes and ears are our best weapons.”

“In my 30 years, we have never had a non-Jewish member in our ranks, only because no non-Jewish person has applied. But say, if someone is breaking into a car – the vehicle does not have a kippa on top of it, so the non-Jews call us, too. And many non-Jews are very supportive and appreciative of what we are doing.”

David Assis, President of the non-profit Community Security Alliance (CSA) and Flatbush Shomrim member said, “We even pay for our own gas. We just want to help. We are not substituting for the police. The people we help could be your or someone else’s family member.”

Those involved in security urge citizens not to take things for granted, citing the latest laws have made it harder to punish criminals.

Joe Dwek, Syrian Community liaison to NYPD, said, “Make sure your car doors and windows are locked and nothing valuable is inside the car. Sometimes when people report something was stolen, we see the footage and notice that the perpetrator was checking every car on the block to see if it’s locked or unlocked. And if it is unlocked, they will go for it.”

Dwek explained, “When Rudy Giuliani was inaugurated as mayor in the 1990s, he cracked down on fare beaters and squeegees (people who harassed people to wash their car windshields for money). When they put away the minor criminals, the major crimes went down.”

Dwek described the downturn of events after almost three decades since then. “After the George Floyd incident, police officers cannot touch someone between their shoulders and hips. So, you cannot take someone down without touching them, even if they are pulling a gun. I cannot think of any martial art known where this is possible. It is worse than ‘having their hands tied’.”

Moskovitz advised, “Don’t be a soft target – make it difficult for them. Many people leave their cars for a few minutes to grab a water from the store and they leave the door open. And sometimes they even leave a spare key and the engine running, and someone can drive away with it. We see what is really happening. Many of the crimes are ‘crimes of opportunity.’ Some of the things people leave in cars is just not normal! Don’t leave anything in plain view. This is New York, not Kansas. If I told you what I’ve heard people leaving out, it is not normal – wallets, credit cards, iPads, jewelry! Do not even leave a garbage bag in plain view because criminals might think there is something of value inside and break in. Bail reform created a perfect storm!”

Mr. Moskovitz said, “Now, over 30 of our 80 Shomrim members are from the Syrian community and 60 percent of the phone calls we receive are also from Syrian community members. I would appreciate it if they would also match that with funding.”

Assis said, “Along with house and car break-ins, we also have endless package theft. And this is not a fun environment to be in, especially when it is like this! It was right around the time of the pandemic when things got so out of control and all these laws changed. It is unfortunately in your ‘backyard.’”

Assis suggests that things became “out of control” and “people can do whatever they want” since the pandemic era. “People will commit more crime when there are no repercussions.”

Everyone is clearly concerned about anti-Semitism. Moskovitz recalls an incident where suspects were believed to be targeting synagogues in the early hours. Shomrim deployed volunteers during Shabbat because the anticipated crime was ”life threatening.” Thank Gd the perpetrators were apprehended before they arrived.

Assis said, “Every day is a different day for us volunteers, but unfortunately, we have to worry about active shooters these days. If you see anything that does not look right, make a phone call to us or the NYPD. Don’t brush it off – that one phone call could save lives.”

Assis also sternly warned against posting “fake news” that could “put the community into panic.” He said, “Recently, we had a terror threat and people posted that the person was caught in front of our synagogue, but it was not right. As we went to warn people that there was an armed and dangerous man on Shabbat, when people were not on electronics, someone had posted that the person was captured in front of a synagogue in Ocean Parkway.  Sometimes they simply want to get followers and sound ‘juicy’ but that does not help!”

Inna Vernikov, member of New York City Council’s 48th District said, “Right now, the Syrian Community is split into three districts, mine, Kalman Yeger’s, and Ari Gegen’s. Next year when the maps are redrawn, I will have more Syrians in my district. They are very aware of my efforts to fight against anti-Semitism. I worked very hard to combat this in CUNY (City University New York) where many Syrians attend.  I work with the police, the Hate Crimes Unit and the Brooklyn DA’s office to fight this.” Last year there was a case where two boys were assaulted by Palestinians because one of the boys was wearing an IDF hoodie. The perpetrator who punched the boy wearing the hoodie got more bail than he would have if we didn’t fight it. Right now, things are not moving in the right direction at all, but I am staying here. I am not moving to Florida. I still have hope for the city.”

As petty crime and anti-Semitism in New York both are on the rise the general public must be more vigilant. Citizens need to stay aware of their surrounding and not be complacent.

Dwek said, “Members are free to contact me to meet the police assigned to their block and be able to communicate with them directly. In these times, it is very important to have relationships such as these.”