A special event for our community’s singles was held last month under title “Finding the Right One,” featuring a moving and informative address by one of the community’s most esteemed rabbis, Rabbi Eli J. Mansour. The event, which took place on November 19th at the Edmond J. Safra Synagogue in Brooklyn, was organized by Touvi Assis, along with his wife Jennifer, who sponsored the class in honor of their children.

“I was hoping at least 40-50 singles would show up so the rabbi would feel it was worth his time,” said Assis. “We were both overwhelmed by the turnout. We had to open the upstairs seating and add folding chairs to accommodate the 450 young men and women who came out to hear the rabbi!”

Assis said he organized the event because he felt a strong need to help the many young men and women in our community who feel confused, who are not certain what to look for when searching for a partner, where to look, and what route to take to find a soulmate.

Rabbi Mansour began the class by commending those who took the time and the initiative to attend. He said that simply showing up is a step in the right direction towards getting married, as it signifies the hishtadlut – personal effort – that one needs to make to learn about the mitzvah of marriage, and when Hashem sees one doing his part, He will then step in to do the rest.

Next, the rabbi addressed the proverbial elephant in the room – the misconceptions that many people have about love and marriage due to their exposure to the surrounding culture. The message we receive from modern culture is that the most important thing is attraction and good looks. But while the superficial attraction of physical beauty is useful in initially catching attention, it eventually wears off. Infatuation, the rabbi explained, is society’s confused interpretation of love. From the Torah’s perspective, love develops over time; it is not a spontaneous emotional reaction. And the way it develops is through giving and investing in a person.

The rabbi noted that the Hebrew word for love is ahavah, which stems from the root “hav“ – “give.” He explained this concept by way a scientific study which discovered that when a baby is first born, the mother automatically loves the child more than the father does. This is because the mother has already invested so much time and energy into making the baby, whereas the father had done very little to this point. True love is experienced through the investment of time and effort. Society tells us of “love at first sight,” but we need to move away from this perspective, and understand that love is created, and doesn’t just happen on its own in an instant.

Turning his attention to the process of finding and selecting a spouse, the rabbi stated plainly, “We’re overthinking it.” From what he sees, many singles are “searching for something that doesn’t exist: perfection.” The rabbi insisted that “no one is perfect,” and so there is no sense for trying to find the “perfect” match.

“That is the exact point of marriage – to grow together, to learn to tolerate each other’s imperfections, and to try to reach perfection together.”

Rabbi Mansour also spoke about matchmaking, which he described as “Gd’s preferred route.” Acknowledging that this system has its flaws, as evidenced by the “horror stories” we’ve all experienced or heard about, the rabbi insisted that the alternatives are worse. One benefit of having a “middle man” is avoiding the awkward and uncomfortable experience of telling a prospective match that one is not interested after one or two dates. The shadchan (matchmaker) is also available for advice if a specific question arises, such as a potential “red flag” that is best to be detected early on.

The rabbi said that if matchmaking was good enough for our patriarch Avraham, who sent his trusted servant, Eliezer, to find a bride for Yitzhak, then it should be good enough for us, as well. Even if for some the process seems strange and conjures images of Fiddler on the Roof, this ancient tradition is the least complex and most effective route to find the right one. If you happen to find someone a different way, the rabbi says, then “that’s great, and all the power to you!” But if you are first considering where to look for a mate, keep an open mind when it comes to matchmaking.

Rabbi Mansour told the story about a couple that met through a rabbi and a shadchan. The girl, whom most would describe as “regular,” went on a Community Center ski trip and broke her ankle getting off the bus on the first day. She spent the trip sitting-out, injured, and unable to enjoy the activities with her friends as she had planned. Someone gave her a recording of a class by our community’s esteemed Rabbi Shlomo Diamond. That one recording led her to hundreds more, and wound up changing her whole outlook on life as well as her entire future. Meanwhile, over in Lakewood, a 24-year-old yeshiva student was seeing all his friends get married, but was content just “doing his thing,” without rushing to find his soulmate – until a conversation with his rabbi, Rabbi Diamond. 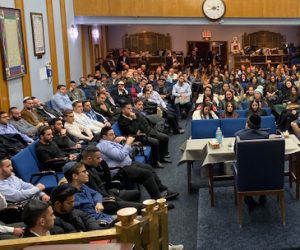 “I don’t understand,” Rabbi Diamond said. “Why do you put on tefillin in the morning? Why do you observe Shabbat?”

The young man replied, “I do them because they are mitzvot, of course.”

“Getting married is also a mitzvah,” Rabbi Diamond said to the young man. “You have to put in the effort to fulfill it, no less than other mitzvot.”

And thus the girl who would not have been ready to marry a Lakewood Yeshiva boy were it not for a broken ankle, and the yeshiva boy who wasn’t trying to get married, were introduced at the exact right time, and those two are today Rabbi Eli and Sandra Mansour.

Rabbi Mansour emphasized that he searched for a spouse through a matchmaker, and saw Gd’s hand in the process at each step along the way. When all is said and done, the rabbi commented, whatever we try, it’s all up to Hashem to connect us to the right person, and each person must put in the effort and do the best he or she can, leaving the rest to Hashem. And for this reason, the rabbi explained, throughout the story of Eliezer’s journey to find a bride for Yitzhak, he is never mentioned by name, and is called instead “the servant” or “the man” – because he was facilitating Gd’s work. It wasn’t him; he was just a servant of Gd.

After his speech, Rabbi Mansour opened the floor to questions, and somebody asked the rabbi for guidance as to what qualities one should look for when searching for a spouse. The rabbi replied that a boy should try to find an optimistic girl, a girl who speaks positively about others, doesn’t gossip, gives people the benefit of the doubt, and has a certain degree of modesty. As far as what to look for in a young man, the rabbi said it is all about middot –refined character. Whether or not the boy has mastered large portions of the Talmud is far less important than his being sensitive and respectful. A man should have fear of Gd, be honest, control his anger, and be soft-spoken.

Both the organizers and attendees agreed that the event was a resounding success, and plans are underway for future events.

Video and audio recordings of Rabbi Mansour’s class are available at iTorah.com, under the title, “Finding The Right One” (code SB527).