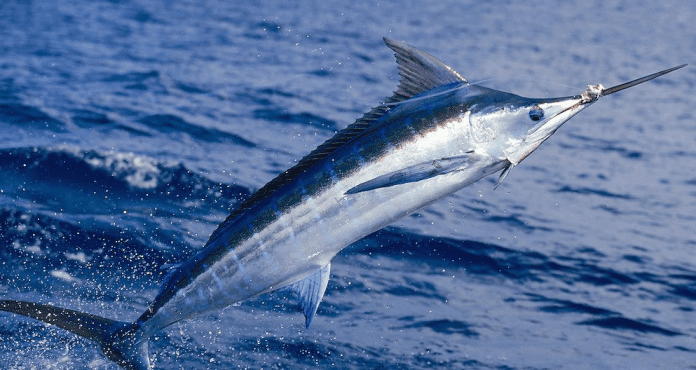 The female blue marlin is the largest kosher fish in the sea. Female blue marlins, which can grow up to four times the weight of males, can reach up to sixteen feet in length and weigh over 1900 pounds! Males rarely exceed 350 pounds.

The blue marlin is quite a magnificent creature, with deep cobalt blue coloring on top, a silvery-white belly, and a very distinct dorsal fin. But its most noticeable feature is its long upper jaw that is spear-shaped, and extremely deadly. Blue marlins use their “spear” to slice and slash their way through a large school of their chosen prey, and then turn and come back to eat the dazed and wounded fish. They feed mainly on mackerel and tuna, but will also dive deep in the ocean to prey on squid.

Blue marlins are also among the fastest fish in the ocean, swimming up to 60 mph. They are found in the tropics and subtropics of the Atlantic, Pacific, and Indian Oceans. Blue marlins are migratory, which means they will move to warm ocean currents, hundreds and even thousands of miles away, every winter.

Although various types of kosher animals and birds qualify as korbanot, no type of fish is allowed to be brought on the Mizbei’ach as a sacrifice.

Why the Blue Marlin Is Kosher

The blue marlin and the swordfish look very similar, and both fish are members of the billfish family – yet one is kosher and one is not!

One of the signs that a fish needs to have (see Torah Connection below) to be considered kosher is kaskesses, which is generally translated as scales. According to the Torah, real scales are those that can be easily removed without damaging the fish’s skin.

The scales of the blue marlin, on the other hand, can be properly removed without tearing the fish’s skin. So, despite resembling the non-kosher swordfish, the blue marlin is kosher, as it has the requirements necessary for a kosher fish.

(Rabbi Y. Ephrati wrote a psak in regard to the blue marlin being kosher in the name of Rav Elyashiv, zt”l, in a teshuvah dated 11 Elul, 5763.)

The Torah (Vayikra 11:9) gives two signs that determine if a fish is kosher: fins and scales. In order for a fish to be kosher, it must have both of these signs. According to the Gemara (Niddah 51b), any fish that has scales also has fins. So, if one is certain that a particular fish has scales, it is considered a kosher fish.

However, there are certain conditions that the scales need to meet in order to be considered real scales by the Torah. They must be visible to the naked eye (Aruch Hashulchan 83:15), and they must be easy to remove, whether by hand or with an instrument, without tearing the skin of the fish.

Examples of fish that do have scales but are not kosher include the sturgeon and the sand lance. The sturgeon has scales, but its scales are classified as ganoid, which means they are covered in a hard substance that’s similar in texture to fingernails. These scales cannot be removed without tearing the skin. The sand lance may have tiny scales, but they are not visible to the naked eye.

Any sea creature that does not have fins or scales is not kosher, regardless of whether it is scientifically classified as a fish or whether it actually resembles a fish. This means that whales, prawns, shellfish, octopuses, lobsters, crabs, and shrimps are all not kosher.