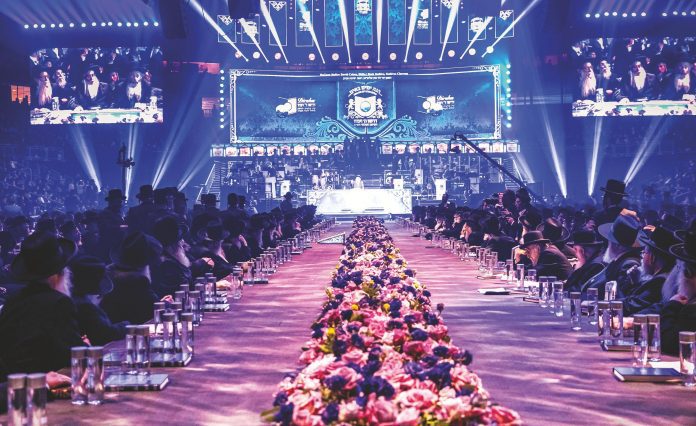 The answer? In a word: “From Dirshu!”

This fascinating exchange was related at the deeply inspiring Dirshu World Siyum for ladies at Newark Symphony Hall on Sunday night, 15 Shevat/February 9. Thousands of women converged on Newark, New Jersey to revel in the Torah accomplishments of their husbands, and to celebrate true simchat haTorah – joy of Torah – at a special event catering specifically to women. 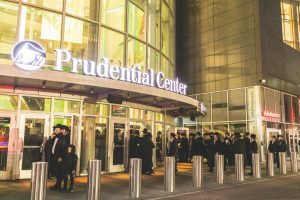 It was a night to remember, a night that began with crowds of women lining an entire city street and stretching around the corner for another half-block; a night filled with hizuk (inspiration), stressing the pivotal role played by each and every woman who supports her husband’s Torah learning; a night replete with uplifting song and dance, expressing the joy felt by women over their share in Torah… Indeed, a night to remember!

The program, which offered a live feed to the main siyum which was taking place simultaneously a few blocks down, was interspersed with magnificent musical performances by world-renowned singers Mrs. Bracha Jaffe and Mrs. Malky Giniger, and an inspiring speech by Rebbetzin Sarah Meisels, daughter of the Bobover Rebbe, Rav Shlomo Halberstam, zt”l, and wife of Rav Yaakov Yisrael Meisels, shlita, the Bobover Rov and Rosh Yeshiva in Israel.

The background to the mysterious exchange cited at the outset is a powerful story about a mother who at first found herself unable to accept the reality of her newborn daughter’s physical disability, and a father who firmly, and with tremendous strength, declared that just as Hashem accepts and loves all of His children despite their deficiencies, they, as parents, would also accept this child with all of her deficiencies.

The unexpected climax of the story was the father’s declaration that it was Dirshu that provided him with the strength, the emunah and the bitahon to accept the test that Hashem had thrust upon them with a physically challenged child.

“Just this week, I got back my first Dirshu test with a very high mark,” he explained. “When I saw that mark, I said, ‘I got the message! You want me to use this Torah to get a high mark in life…’ When our baby was born, I realized that it was a moment when I was being tested, and I decided to show Hakadosh Baruch Hu that just like I could learn Torah and get a high mark on the test…I can also get a good mark in life, in this new test that He sent us. My yiras Shamayim [fear of Gd]] has taken on a different level since I joined Dirshu.”

This remarkable story told over at the women’s event, by Mrs. Jackie Bitton, was but one highlight of an unforgettable event filled with genuine joy and overpowering emotion.

Rebbetzin Meisels pieced together a magnificent tapestry of hizuk, explaining with numerous stories and examples of how a woman’s very purpose in life is to infuse her husband, her home, and her family with Torah and spirituality.

“Have you ever wondered,” the Rebbetzin asked, “about the berachah that we say every morning – the berachah of ‘la’asok bedivreh Torah – to engage in words of Torah’? In what way are we ‘osek’ [‘engaged’] in Torah? In what way is a woman’s job Torah?”

She answered, “A woman’s job is to encourage our husbands and children. When they begin their day each morning, it is our job to infuse them with simcha [joy]. Yes, when your husband dashes in, grabs a few bites of supper and runs out again, wish him hatzlahah [success]! When the kids are crying, you’ve had a long day, and you want nothing more than your husband’s help…that is your helek [portion] in Torah! That is what infuses your entire family with yirat Shamayim!”

The Rebbetzin proceeded to note Gd’s instruction to Avraham to heed everything that his wife, Sarah, said. Through this instruction, the Rebbetzin explained, Gd “was infusing the woman with the power, the responsibility, to inject spirituality into our families.”

Moreover, she said, whereas Gd created all other creatures with both male and female genders right at the outset, the creation of the human being began with just the creation of Adam. Havah was created later, after Gd commanded Adam the seven “Noachide laws” charged upon all mankind. And, as opposed to Adam, who was created from the ground, Havah was created from Adam himself, from Gan Eden. The reason, the Rebbetzin explained, is because Havah was given a very special job – to infuse Gan Eden into the earth, into her family.

She then cited the Sages’ teaching that a man without a wife is a man without Torah. Even if an unmarried man learns Torah, the Rebbetzin said, “he is lacking the ‘powers’ of his wife, the spirituality, the serenity, the yirat Shamayim.”

The Value of Every Moment 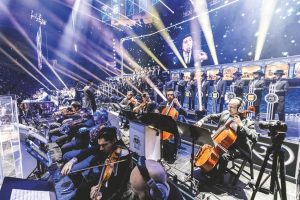 It was a special moment when Mrs. Malky Giniger introduced Mrs. Shiffy Hofstedter with a magnificent song to the beautiful words, “Etz haim hi – It [Torah] is a tree of life.”  Mrs. Bitton then presented Mrs. Hofstedter with a special clock as a gift, explaining, “She is the woman behind Dirshu! She, more than anyone, has shown each and every one of us the value of every single moment!”

Another stirring moment was the remarkable pantomimed dance and song created by the world-famous Mrs. Miriam Israeli, and sung by Mrs. Malky Giniger.

Throughout the evening, Mrs. Bracha Jaffe sang a stirring potpourri of slow, haunting melodies, as well as lively, uplifting songs, each one introduced with a connection to Torah and to the Siyum HaShas. The sight of so many women joining to express gratitude to Hashem for the precious gift of a Torah life left an indelible impact upon everyone in attendance, which will remain with them for many years to come.

The Voice of Torah 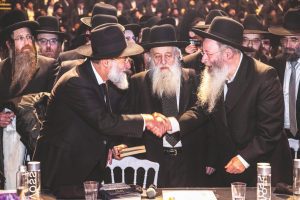 Citing the Vietzner Rav, Rebbetzin Meisels told the story of a delegation of rabbis that came before Empress Marie Theresa to plead on behalf of the Jews. During the visit, one of the rabbis screamed in pain.

The Empress remonstrated, “Are you raising your voice to me??!”

The rabbi replied, “That voice is not MY voice. It is the voice of thousands of fathers, mothers and children crying out in pain through me.”

On the basis of this story, the Vietzner Rav explained that when Pharaoh’s daughter found an infant, Moshe, in a basket in the Nile River, and she heard him crying,  she said, “Miyaldeh ha’Ivrim zeh – This is from the Hebrew children,” – with the word zeh (“this”) referring to Moshe’s cries, which represented the cries of all the Jewish children who were being thrown into the Nile.