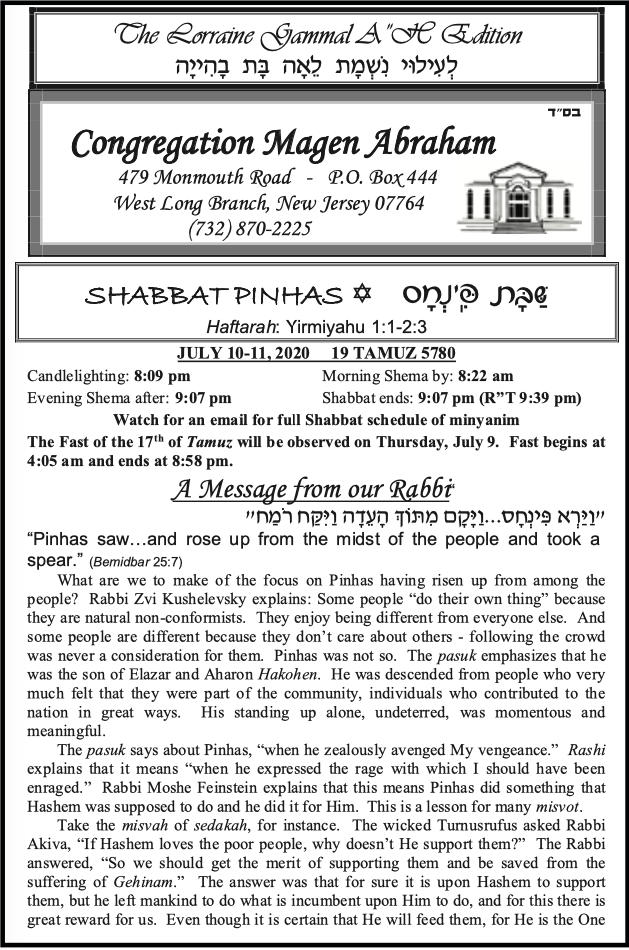 You may be familiar with this parashah bulletin.  The Magen Abraham Synagogue of West Long Branch, NJ has been producing this weekly bulletin for close to 25 years, and until recently it has been distributed to approximately 20 different shuls in the Brooklyn and Deal communities.  However, when all the shuls shut down a few months ago, distribution to shuls ended.  Even though the production of the bulletin continued, the only way to receive the bulletin was by email or snail mail.  Anyone who was accustomed to pick up a copy in his local shul every week no longer had that luxury. 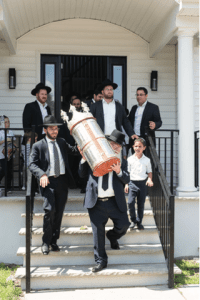 On Sunday, July 5th, an emerging kehilla in the heart of Lakewood’s Sephardic community celebrated its first Hachnasat Sefer Torah. Minyan Avrechim Sefaradi, or “the Marc Shul,” as it is affectionately known, was established four years ago in a small shed, barely getting a minyan. It quickly grew to number over forty families as well as many mitpallelim from the neighborhood and enthusiastic summer visitors.

Under the leadership of Rabbi Ariel Ovadia, joined by his brother-in-law Rabbi Moshe Pinchasi, the synagogue boasts minyanim on Shabbat and throughout the week, shiurim in halacha, Ein Yaakov, pizmonim, children’s programs by Rabbi Jackie Mizrahi, special learning chaburot with Rabbi Haim Sananes, and a morning kollel named “Midrash David.” The shul is well known for its warmth and close-knit atmosphere.

Two years later, the Sefer Torah was completed and was ready to be ushered into the Bet Knesset. A special case was commissioned with the inscriptions of all the names of the kehilla members and donors. After delaying the hachanasa a couple of months, it was finally celebrated with great excitement and true joy, as every member of the kehilla was a participant and a “Baal HaMitzvah” himself. A building campaign was launched at the event to serve the growing kehilla. 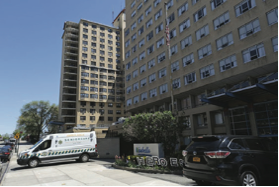 New York State has finally restored visitation in nursing homes, albeit on a limited basis, nearly four months after visitors were banned from nursing homes and hospitals due to the coronavirus pandemic.

Nursing homes and long-term-care facilities in which COVID-19 has been absent for at least 28 days will be allowed to resume limited visitations. Each resident will be permitted two visitors at a time, at least one of whom must be at least 18 years old, but only 10 percent of a facility’s residents may have visitors at any one time. Visitors must undergo temperature checks, wear face coverings, and maintain social distance during the visit.

The resumption of on-site visitation for the state’s Long Term Care Ombudsman program, which provides additional support to residents of nursing homes and long-term-care facilities, has also been restored.

Elected officials and activists who have been advocating for months to allow visitation in hospitals and nursing homes applauded the announcement.

“It’s about time that people are able to visit their loved ones in nursing homes,” State Senator Simcha Felder said. “This prohibition took a massive emotional toll on residents and their loved ones. This critical change marks the start of healing that I’m sure will save lives.”