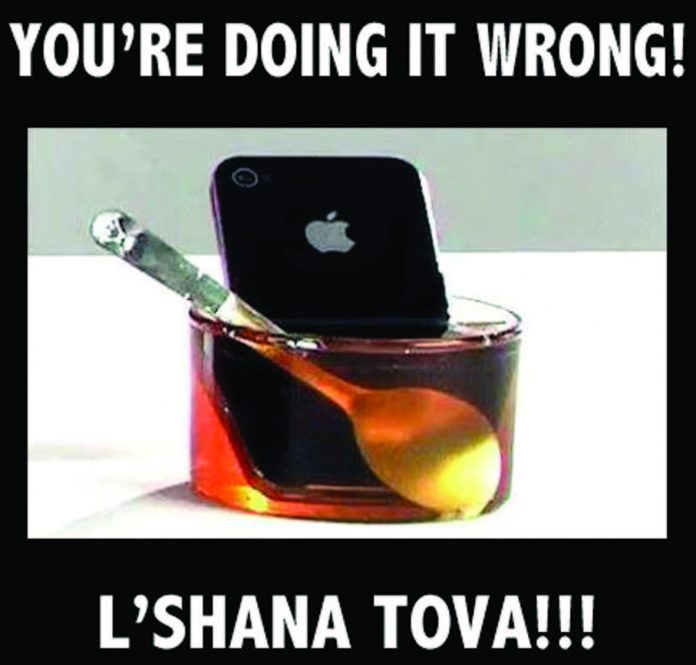 Solomon was complaining to his rabbi about how difficult a time he was having in disciplining his teenage son. “When I was a kid and I did something wrong, my parents sent me to my room without supper. But my son has his own smartphone, computer, and video game system in his room!”

“So how do you handle it?” the rabbi asked.

A large two-engine train was crossing New York and at the helm was a train engineer who had recently moved from Israel – Itzik Hadari. After they had gone some distance, one of the engines broke down.

“No problem,” Itzik said and carried on at half power. Farther on down the line, the other engine broke down and the train came to a standstill.

Itzik decided he should inform the passengers about why the train had stopped, and made the following announcement, “Ladies and gentlemen, I have some good news and some bad news. The bad news is that both engines have failed, and we will be stuck here for some time. The good news is that you decided to take the train and not fly.”

A do-it-yourselfer walked into a hardware store knowing exactly what he needed. “I’m looking for a one inch flat washer,” he said.

“Sure, we’ve got that” the clerk answered as he reached into a box under the counter. “That will be 15 cents.”

“Fifteen cents for a washer? Are you crazy?” the customer yelled. “Forget it. I’ll just drill a hole in a quarter and make my own!”

The Price Is Right

Freddie bought a new fridge and put his old fridge in his front yard with a big sign:

“Free. Good Condition. You want it, you take it.”

For three days the fridge sat there without anyone showing a bit of interest. So he decided to try something else. He changed the sign to read: “Fridge for sale, only $50.”

The next day someone stole it!

It was the first day of school and thankfully kids were back in school after a long extended summer. Mrs. Greenberg, the 10th grade English teacher, was setting some of her ground rules. “There are two words I don’t allow in my class. One is gross and the other is cool.”

From the back of the room Carl called out, “So, what are the words?”

“What’s the matter, Phillip?” she asked.

“It’s my big brother Jason,” the boy sobbed. “He hit his finger with a hammer.”

“Well that’s a shame,” Cindy said, “but why are you crying?”

“Because,” Philip explained, “at first I laughed!”

Jack was looking for his daily newspaper. Unable to find it after searching for 30 seconds, he called his wife to help him.

His wife instantly picked up the blanket on the couch and found the newspaper sitting right under it.

Slightly annoyed at being interrupted from her own duties in the kitchen, his wife told him, “Jack, be resourceful!”

While Susan stood on line at the airport to check in her baggage, a security agent was questioning each passenger. When he got to Susan, he asked, “Has anyone put anything in your baggage without your knowledge?”

Susan replied, “If it was without my knowledge, how would I know?”

The agent smiled knowingly, nodded, and said, “That’s why we ask.”

Little Danny was having a tough time adjusting to first grade. At least twice a week his parents would receive a note from his teacher outlining his latest infractions. Finally, his parents sat him down and said, “Danny, we’ve had enough! We don’t want to get any more notes from your teacher!”

“Well… alright,” Danny replied. “Do you want to tell her or should I?”

The Edelstein family from New York was getting a guided tour through one of the ancient crusader fortresses in the land of Israel.

“This place,” their tour guide told them, “is almost one thousand years old. Not a stone in it has been touched, nothing altered, nothing replaced in all those years.”

“Wow,” said Mrs. Edelstein, “they must have the same landlord as us.”

Deep within a forest, a little turtle lived together with a family of birds for many years. One day he began to climb a tree, in an attempt to fly. After tremendous effort he reached the top, jumped into the air waving his front legs and crashed to the ground. After recovering, he slowly climbed the tree again, jumped, and fell to the ground. The turtle tried again and again while a couple of birds sitting on a branch watched his sad efforts.

Finally, the female bird turned to her mate. “Dear,” she chirped, “I think it’s time to tell him he’s adopted.”

Mr. Stein went to the kosher meat restaurant by his house and the head waiter came over and greeted him with a smile.

“Good morning sir, may I take your order?” the waiter asked.

“Yes,” replied Mr. Stein. “I’d like two boiled eggs, one of them so under cooked it’s runny, and the other so over cooked it’s tough and hard to eat. Also, a steak that has been left out so it gets a bit on the cold side; burnt toast that crumbles away as soon as you touch it with a knife; margarine straight from the deep freeze so that it’s impossible to spread; and a pot of very weak coffee, lukewarm.”

“That’s a complicated order sir,” said the bewildered waiter. “It might be quite difficult.”

Mr. Stein replied, “Oh? I don’t understand – that’s what I got yesterday!”

A man is flying in a hot air balloon and realizes he is lost. He reduces his altitude and spots a man down below. He lowers the balloon further and shouts, “Excuse me, can you tell me where I am?”

The man below says, “Yes, you’re in a hot air balloon, hovering 50 feet above this field.”

“You must be an engineer,” says the balloonist.

“Well,” says the balloonist, “everything you have told me is technically correct, but it’s of no use to me.”

The man below says, “You must be in management.”

“I am,” replies the balloonist, “but how did you know?”

“Well,” says the man, “you don’t know where you are, or where you’re going, but you expect me to be able to help. You’re in the same position you were before we met, but somehow now it’s my fault.”