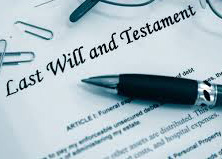 Joan, the eldest child of her beloved father, testified that months before his passing, her father said that he wished to gift her younger sister Sherry a sum of $100,000 from his estate. For many years Sherry selflessly tended to all of her father’s complex medical needs. Their three brothers presented the last will and testament to our Bet Din, which allocated to each of the three sons 25% of the estate, with Joan and Sherry to receive 12.5% each. Upon Joan’s testimony the three brothers responded that they never heard of such a baseless claim. The brothers explained that the reason their father gave each daughter 12.5 %, was in lieu of Sherry’s dedication. Joan was gifted her percentage only on account of Sherry, as their father did not want to leave her out of the distribution. The brothers suggested that perhaps Joan and Sherry conspired against them to collect an additional $100,000, since this is the first time they heard of the extravagant gift. Joan emphatically reinstated her claim and added that Sherry and her husband were in deep debt and were struggling. Joan claimed that it was their father’s last wishes to help Sherry with an additional sum of money.

Is Sherry entitled to an additional $100,000 from the Estate? How should the Bet Din rule and why?

According to the ruling of the Shulhan Aruch a person who is terminally ill is extended the right to verbally distribute his funds to his beneficiaries. While under normal conditions a will is required to be in writing, in extenuating circumstances oral instruction by a terminally ill patient is a binding transaction. Nevertheless, numerous regulations govern this leniency. The transaction is valid only if the patient verbally distributes all of his assets. However, merely gifting part of his assets is insufficient and ineffective.

The underlying reasoning for this stipulation is that the leniency of verbal distribution is limited to, and in place of, a written last will and testament. When a patient distributes all of his assets it is a clear indication that his oral instruction is in place of a written will. He would not have distributed everything he owned and left himself penniless unless it was, indeed, his last will and testament. In short, the leniency of an oral distribution is not extended to one who wishes to extend a gift to another.

It is important to note that the above halachic stipulation is for a terminally ill patient. If, however, a patient is clearly on his deathbed, nearing his end, even a partial transfer of his assets constitutes a binding verbal transaction.

Furthermore, according to many halachic authorities, when a terminally ill patient is verbally distributing his estate, he is required to do so by using specific terminology. Terms such as give, transfer, or award are required for a verbal transaction to be effective. Terms such as “I wish” or “I want,” are invalid, and are halachically ineffective.

Additionally, in the absence of two valid witnesses attesting that the patient instructed a distribution of his assets, it is highly likely that the rightful heirs will contest whether the verbal distribution ever occurred.

While too often the last wishes of the deceased do not meet halachic requirements and are not legally binding, nevertheless, it is a mitzvah for the heirs to carry out the wishes of the deceased. Interestingly, unless the patient empowers one of heirs with the necessary means to execute his wishes, many halachic authorities release the heirs from any required action.

By rule of the Shulhan Aruch, one of the highest forms of charity is to give one’s relatives. This preferred form of giving includes giving to parents, children, brothers, or sisters. This
preference is compounded when the charity is given to a family member who is diligently studying Torah.

Our Bet Din ruled in favor of the three brothers by denying their sister Sherry her $100,000 claim against her father’s estate. As mentioned in Torah law, since Sherry did not have two witnesses attesting that her father verbally gifted her the money, her brothers can rightfully contest the claim. Furthermore, even according to the claim, their father verbally distributed only a portion of his assets by “wishing” they be gifted to his daughter Sherry. By rule of the Shulhan Aruch, a partial distribution, along with only wishing to gift, are legal reasons to disqualify such a verbal transaction. Additionally, in this instance, the brothers are not required to perform the mitzvah of respecting their father’s wishes. In the absence of two valid witnesses, it is possible that the father never instructed to make a payout to Sherry. Also, their father failed to empower one of his children or a third party with the necessary means to execute a $100,000 payout. Hence, their father’s instruction, even if it did transpire, is rendered nothing more than a passing thought and is null and void.

Nevertheless, our Bet Din suggested that a portion of the required maaser from the inheritance money be given to Sherry. By rule of the Shulhan Aruch, one of the highest forms of charity is giving to a family member.

YOU BE THE JUDGE!

Sara and Alan were newly married. They enjoyed an extravagant wedding, even during the height of a pandemic. The flowers, music, catering, and photography were from the finest service providers in the industry. Sometime after the wedding, they were informed by Jack, the photographer, that his main office was robbed and the burglars stole all of his valuable equipment, including the pictures and video of their wedding. Sara and Alan were devastated by the news and claimed that Jack was required to return the payment for his services and provide steep monetary compensation for their misfortune. They added that there was ample time between the wedding and the theft during which Jack could have stored their file on a backup online system. Jack responded that since he fully serviced the couple on the night of their wedding, he was entitled to most of the $6,000 he was already paid. As per compensating the couple for the stolen pictures and video, Jack dismissed the
offensive claim. Jack explained that he locked his office door as usual only to return the next day to the scene of a full-fledged burglary. He added that the couple were selfishly thinking of their own loss and not of his far more substantial one. He responded that if the office was safe enough for his valuable equipment it was safe enough to store their wedding file.

IS JACK ENTITLED TO HIS WAGES? IS HE REQUIRED TO COMPENSATE SARA AND ALAN FOR THE LOSS OF ALL THEIR WEDDING MEMORIES? HOW SHOULD THE BET DIN RULE AND WHY?