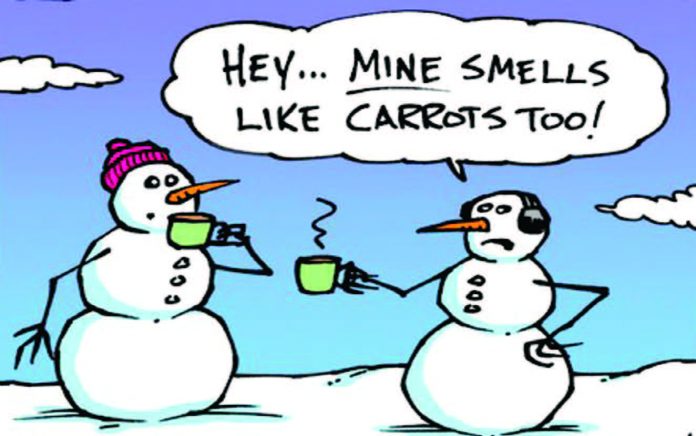 This is a story about four people named Everybody, Somebody,
Anybody, and Nobody.

There was an important job to be done and Everybody was sure that Somebody would do it.

Anybody could have done it, but Nobody did.

Somebody got angry about this, because it was Everybody’s job.

Everybody thought Anybody could do it, but Nobody realized that Everybody wouldn’t do it.

It ended up that Everybody blamed Somebody when Nobody did what Anybody could have done!

David brought home a backyard swing set for his children and immediately started to assemble it with all the neighborhood children anxiously waiting to play on it.

After several hours of reading the directions, attempting to fit bolt A into slot B, etc., he finally gave up and called upon an old neighborhood handyman who everyone called Heshy the Handyman.

Heshy the Handyman came over, threw the directions away, and in a short while had the set completely assembled.

“It’s beyond me,” said David, “how you got it together without even reading instructions.”

“To tell the truth,” replied Heshy the Handyman, “I can’t read, and when you can’t read, you’ve got to think.”

My wife recently ran into the housekeeper who used to clean our house many years ago and was surprised to hear that she was still at it, despite her advanced age. “How do you manage to do all the strenuous work housekeeping entails?” my wife asked.

“I do housework for clients who can’t see the dirt any better than I can,” she replied.

My therapist told me that the way to achieve true inner peace is to finish what I start. So far today, I have finished two bags of chips and a chocolate cake.

Lately, though, this hasn’t seemed to work. Waitresses and waiters now often respond, “I’m sorry, we don’t have Coke. We have Pepsi, Diet Pepsi, Dr. Pepper, and Sprite.”

Tired of listening to the long list of soft drinks, I thought I’d make life easier. So one day I simply asked the snack bar clerk at a movie theater for a “dark, carbonated beverage.”

The young man behind the counter chuckled and asked, “Sir, would you like a cylindrical plastic sucking device with that?”

It was Friday afternoon and Max came home from work to get ready for Shabbat. He noticed that much of the food had yet to be cooked so instead of waiting for Miriam, he decided to take the initiative and roll up his sleeves and get to work. First, he was going to make the salad. He searched high and low for the big salad bowl and finally found it in the refrigerator, but it was half full of Kool Aid.

“Who on earth put Kool Aid in a bowl?” wondered Max.

He looked around and found some empty pop bottles, rinsed them out and using a funnel, transferred the Kool Aid to the pop bottles and returned them to the fridge. He then made the salad and started preparing the rest of the dinner.

Later, Miriam came home. She had been to the store to get some last minute groceries and was putting some things into the fridge, when suddenly she asked Max, “Who on earth put my Jello into pop bottles?”

During our home renovation, my wife was watching me drive in some nails. “You hammer like lightning,” she said.

Teacher: Billy, how do you spell “crocodile”?

Billy: Maybe you think so, but you asked me how I spell it.

Bump in The Night

One summer evening during a violent thunderstorm a mother was tucking her son into bed. She was about to turn off the light when he asked with a tremor in his voice, “Mommy, will you sleep in my room tonight?”

The mother smiled and gave him a reassuring hug.

A long silence was broken at last by his shaky little voice: “What a scaredy-cat.”

Q: What do snowmen eat for breakfast?
A: Frosted Flakes!

Q: Where do snowmen keep their money?
A: In a snow bank!

The teacher was collecting homework assignments from everyone in row four. When she passed Amy, she saw there was no paper on the desk, and she gave the young girl a disappointed look.

“Amy, where is your homework? This is the third time this week…”

Amy looked up innocently at the teacher and said, “But I followed your instructions exactly. You said the homework was ‘a piece of cake.’ I didn’t want to waste it, so I gave it to my baby brother to eat.”

Upon entering a local burger joint, Jason ordered a burger with a tomatoes and “minimal lettuce.” The woman behind the counter apologetically replied, “Sorry, but we only have iceberg lettuce.”

A Ticket to Ride

A motorist was speeding down the highway when a cop caught up with him and ticketed him for speeding. “What am I supposed to do with this?” the motorist grumbled as the policeman handed him the speeding ticket.

“Keep it,” the cop said. “When you collect four of them, you get a bicycle.”

Working on a computer all day has definitely messed with Sarah’s view of reality. We had just placed our lunch order, and as our waiter walked away, he slipped on a wet spot on the floor. “How about that?” she observed dryly. “Our server is down.”