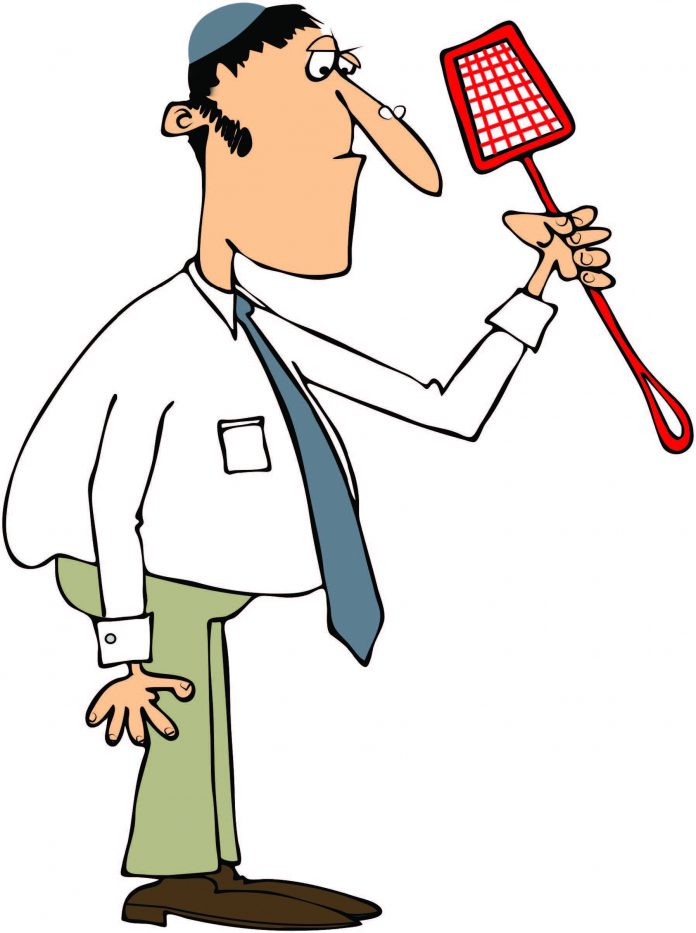 One of the secrets behind the fly’s impressive evasiveness is its outstanding vision. A house fly has two large compound eyes that cover most of its head. Each compound eye is composed of up to six thousand individual visual receptors called ommatidia. Each ommatidium (singular for ommatidia) is a functioning eye in itself, and thousands of them together create a broad field of vision for the fly.

Although a fly’s eyes are immobile, their spherical shape and protrusion from the fly’s head give the fly an almost 360-degree view of the world. The thousands of “eyes” allow it to detect even the slightest of movements from nearly every direction.

In 2008, scientists used super-slow-motion cameras to learn more about the fly’s remarkable ability of evading predators and fly swatters (see “A Closer Look At” section). It turns out that when a fly spots a predator, or a person waving his arms about, it doesn’t just jump into the air. In the next one-hundred-thousandth of a second, the fly freezes, repositions itself, and perfectly coordinates its legs and wings to lift and fly off in the opposite direction of the incoming threat. Flies do this so quickly that our eyes can’t even follow their pre-flight maneuvering, or predict the path of their escape. It’s a split-second for us — but for the fly it’s enough time for it to save itself. 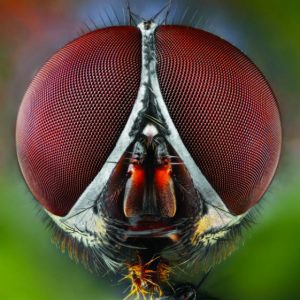 How the Fly Plans Its Escape

Prior to the scientific experiments in 2008, scientists thought that the fly’s escape response was a simple reflex. But when they studied it in slow motion, they found that a fly uses most of the time it has to carefully reposition its legs and body. In other words, the fly does make planning movements prior to its takeoff. Then, at the last possible moment, the fly jumps in the opposite direction of the swatter. The time it takes from the start of the swatter’s move to the fly’s jump-off is only about 288 milliseconds. The fly uses 287 of those milliseconds to plan its movements, and only at the very last millisecond does it actually fly away.

A fly has six legs. The middle two are called the “jump legs” and are the most critical for the fly’s calculated takeoff. When the fly needs to jump backward because the swatter is coming at it from the front, it puts its jump legs forward so that when they extend, they’ll push the body backward. When the threat comes from the back, the fly (which, as we mentioned, has a nearly 360-degree field of view, and can see behind itself) moves its middle legs a tiny bit backward, so that they’ll push the body forward. When a threat comes at it from the side, the fly keeps its middle legs still, but leans its whole body in the opposite direction before it jumps.

The fly is mentioned often in the Gemara, and is usually characterized as being annoying. For example, the Gemara (Shabbat 77b) explains that the reason why the ox’s tail is long is so that, while grazing in the meadow, it can beat off flies with its tail. Curtains were hung over beds as a protection against flies (Sukkah 26a). Also, flies were considered such a nuisance that prayers were ordained for their removal (Ta’anit 14a).

But, as we know, everything that Hashem created has a purpose, even a pesky fly. We find the fly indirectly involved in a couple of monumental events in Jewish history.

Parshat Vayeishev (40:1 – 23) relates the story of how Yosef was sentenced to jail in Mitzrayim, and how he was eventually freed from there. Both the baker and the cupbearer of Pharaoh had sinned against the king. Rashi quotes a midrash that the butler’s sin was that he had served Pharaoh a goblet of wine in which a fly had been found. For this lapse of duty, the butler had been thrown into jail, where he met Yosef, who interpreted his dream for him. When the butler was released from prison, and Pharaoh had some strange dreams, the butler told the king about

Yosef the dream interpreter. Pharaoh immediately freed Yosef from jail so that Yosef could interpret his dreams for him.

It turns out that the little fly in Pharaoh’s cup was the trigger that eventually led to Yosef becoming second to the king in Mitzrayim!

Another momentous episode in which the fly is mentioned is in the story of Purim. The Gemara (Megillah 13b) tells us that Haman, who excelled at speaking lashon hara, approached King Achashveirosh and informed him that the Jews had many strange customs that mocked his kingship. He specifically told Achashveirosh that if a fly were to enter a Jew’s glass of wine, the Jew would remove the fly and then drink the wine, but if the king were to touch the wine, the Jew would pour the whole cup out and not drink any of it. After hearing Haman’s words, Achashveirosh agreed to Haman’s plot of destroying the Jewish people.

We learn from the fly that Hashem has many messengers, and that He often causes the fate of an individual or a nation to be determined by an insignificant object, such as…the fly!