“I want to get across the importance of caring for employees. We said, ‘let’s stick by our employees, who have been with us many years, because they’re relying on us to eat.’”

It has been a full year since the lockdowns, social distancing, and quarantines became a part of everyday life in America, even though months earlier COVID-19 had begun its rapid spread in other countries. The destruction in the virus’ wake was not just sickness and death. Dramatic financial hardships hit at well, with millions of people losing their jobs, their businesses, and even their assets, due to the economic tailspin.

Joseph Shamie and his company are one of many examples.

Shamie, a beloved community philanthropist, is President of Delta Enterprises, the world’s largest manufacturer of cribs and baby furniture.

Fortunately, Delta Enterprises prepared for changing conditions caused by the pandemic even before the mandated shutdown. Employees were provided laptops to ensure they could work remotely and were trained using trial runs even before the work-at-home regulations went into effect.

But Coronavirus wrought some challenges that could not be surmounted. The current pressing concern is that many shipping lines have dry-docked their vessels, Shamie explained, due to tightening COVID-19 regulations.

“If you had goods, there weren’t enough vessels [to transport them], so they had to raise their prices for when they had them available. China became the biggest exporter, even more than before,” Shamie noted. “They started charging quadruple – maybe more. With this backlog, there was a bidding war, just to get a vessel, to get your goods here.”

To make matters worse, consumer prices have not changed, which would have compensated for the losses.

Additionally, there is congestion at the U.S. port, because of sudden weather changes.

As of early February, Bloomberg reports there were three dozen docked ships, not able go back to China to reload. In addition, UPS and FedEx are backlogged. “This is because more people are buying online than ever before,” Shamie said. “So, logistics, due to the pandemic, has become the biggest issue out there.”

Yet despite it all, Shamie took great care to weather the storm with a steady hand, making sure his team of 120 people were taken care of.

When the pandemic issues came to the fore, he and his brother Sam decided not to lay off anyone, and they did not reduce salaries. “I want to get across the importance of caring for employees. We said, ‘let’s stick by our employees, who have been with us many years, because they’re relying on us to eat.’” Shamie noted that this was all done at a cost to the company.

“Don’t abandon them when there is an issue, and when they need us most,” Shamie said. “Do this because it is the right thing to do. And guess what. You will build a more loyal team.” 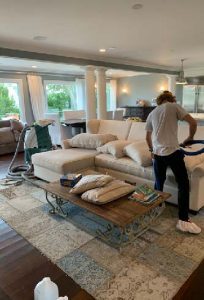 Small businesses had their own hurdles, as well, and some like New Jersey’s Citrus-A-Peel thankfully have been able to pivot their services.

“Nothing was coming in, and I knew nothing would come in for a little while. I became a fulltime dad,” Hartt said.

Then, two months later, a daycare center called to use his disinfecting and cleaning services, and something clicked. He made cold calls to other daycares, and this has become his mainstay. As of late, he reached out to previous customers to let them know of all of the precautions that are being taken – including personal protective gear, latex gloves, and sterile boots. This knowledge helped to assuaged the customers’ fears. 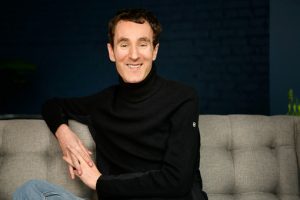 Another entrepreneur found his new niche by leveraging what is now so often used during the pandemic: virtual meetings.

Dan King, co-founder of Fireside Strategic, began his professional life as a corporate lawyer, and never imagined that his career would take him to creating webinars for CEOs. After months of research with his business partner, they were ready to launch their new company in March of 2020. Their goal was to create an agency that would represent executive and leadership coaches selling their services to larger companies.

But as launch week hit, so did the alarms of Coronavirus. “In the midst of so much business uncertainty, we figured organizations would probably be reducing discretionary spending on things like performance coaching, so we threw our research out the window,” says the Brooklyn-based entrepreneur.

“At first, we had no idea what to do instead. So, we decided we’d better talk to a whole bunch of potential organizational customers and see how we could help.”

King and his business partner came up with the concept of hosting their own video cast for CEOs – much like a podcast, but via webinar – and teaching businesspeople how to do the same. Ninety interviews and a year later, they have thus far interviewed a billionaire, some top Silicon Valley founders, and the current #1 Amazon bestselling author in the management segment.

“An interview show for us is first and foremost about meeting and learning from a fascinating person. If you ask thoughtfully, it’s a very easy way to connect with extremely high-level people, since you are creating content for them, and helping them get their message out. Once you’ve got that initial connection point, you can nurture the relationship towards a sale, a referral partner, an advisor, and so much more,” King noted.

“In the middle of the pandemic when there is just so much pain and suffering, it’s hard to carve out a space to celebrate what is beautiful in the moment. There is always going to be a reason for optimism. There is always going to be some meaning, and from that meaning a possibility for optimism. So, we can give guests the experience of celebrating what is awesome about what they are doing.”

We can all learn some lessons from these entrepreneurs, those who have been able to brainstorm ways to modify their business model to survive the “new normal.” It should give us all hope, that even when we hit a wall, know that there is a way around it, over it, or through it. It takes trust in Gd, some pro-active changes on our end, and the knowledge that, as King David once said, “this, too, is good.”