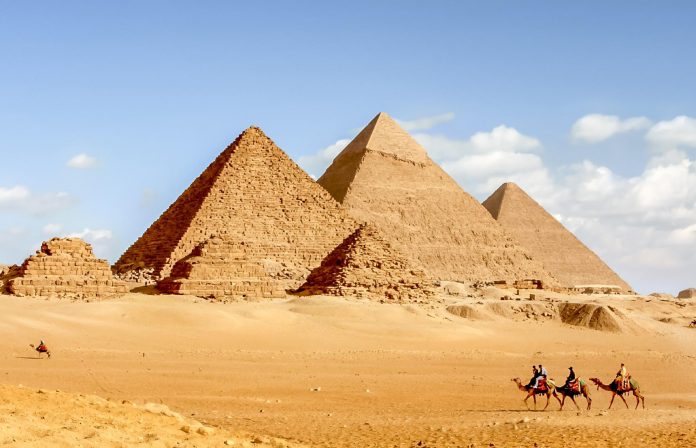 Would you have the courage to travel to Egypt and check out your ancestors’ roots?

Meet Esther and Reuven Guttman, a couple who had the pluck to do just that. The Guttmans booked a five-day vacation to Egypt, on their way to Israel, in July 2019.

What better time to share their exciting story than around the time of Pesach – the holiday celebrating our physical and spiritual liberation from Egypt, a place of bondage and “narrow straights” (as indicated by the Hebrew word for Egypt, “Mitzrayim”).

Reuven, an Ashkenazi Jew with Hassidic roots, is a seasoned traveler who performs his due diligence before choosing a destination. Preferring to visit attractions with a personal tour guide, he makes all his arrangements in advance. Reuven’s wife, Esther, is of Syrian and Turkish descent, and is Reuven’s avid and equal travel partner.

The couple’s primary motivation when selecting their destinations are the country’s history, culture and art. They have journeyed extensively in Europe and the Middle East.

They were enthralled at the thought of seeing Egypt. Esther’s paternal roots are Egyptian, and Reuven still remembers the Yiddish expression from childhood, “Ven de Yidden zenen arois fun Mitzrayim – When the Jews went out of Egypt.”

Were the Guttmans concerned about the political environment in Egypt, post Arab Spring?

Reuven explained that he doesn’t draw attention to himself when he travels. He puts on a hat for eating, drinking and praying as required halachically. Both respect the customs of the venues they visit, especially in countries where women dress modestly.

Esther and Reuven arrived in Cairo on a Sunday and stayed at the beautiful Four Seasons Hotel on the Nile. Their tour guide, Ibraham, an Egyptian Muslim, first took them to an impressive mosque and other historic sites.

A Phone Call From the President

On their second day in Egypt, Reuven asked Ibraham if they could visit any of the remaining synagogues.

Ibraham seemed taken aback by Reuven’s request, and explained that the synagogues have been closed for decades. As Reuven and Esther were well aware, most Jews left Egypt after the 1948 War of Independence.

Ibraham walked away, explaining that he needed to make a phone call. When he returned, he said that they would need go to the Consulate to obtain government approval for a visit to a synagogue. Ibraham’s response had unnerved them, but the Guttmans made an effort to stay calm. It made sense that the Egyptian government would take precautions when someone asks to see a synagogue or church. Probing the purpose for the visit would avoid potential terrorist acts.

At the Consulate, a group of representatives first asked to see Reuven’s passport. A uniformed official noted the name “Guttman,” and inquired if he was Jewish. He replied in the affirmative. He was then asked if he was a Zionist.

“What does that have to do with being a Jew?” Reuven retorted.

This proved to be the right answer, because they moved on to his wife. When the security official looked at Esther’s passport, he saw her maiden name was Maimon. He asked a few times, confirming her name was indeed Maimon. The official then queried slowly, with a hint of admiration, “Might you be related to Mousa ben Maimon, the famous philosopher and doctor of our sultan, Saladin?” He referred to the Rambam – “Rabbi Moshe Ben Maimon,” or Maimonides – one of the greatest spiritual giants in Jewish history, who was revered not only for his Torah scholarship, but also for his knowledge of philosophy, science, and medicine.

Esther replied proudly, “I am a direct descendant of the Rambam.” Esther’s father is an ancestor of Rabbeinu Avraham ben Maimon, the Rambam’s only son, whose progenies later settled in Turkey. The Maimon family continues to use the name “Avraham” when new members are born. Rabbi Avraham succeeded the Rambam as the Nagid (religious leader) of the Egyptian Jews and became the court physician.

Esther and Reuven became frightened when the group snapped pictures of their passports and exited the room with the passports for 15 minutes. They discovered later that the officials were doing a background check online to confirm Esther’s lineage. The Guttmans had previously traveled to many Muslim countries, traveling incognito, without any political agendas, and hadn’t encountered this line of questioning.

When the group returned, it was with elaborate trays of fruit, nuts, Egyptian delicacies, desserts, coffee, and tea. The security official handed a phone to Esther. He explained that President el-Sisi was honored that she was visiting Egypt, and wanted to welcome her personally.

The President said to Esther, “It’s the first time that a descendant of Maimonides has been in this country since the 13th century. We teach our children in school about him. We are going to honor you – welcome home.”

The Guttmans partook of the fruits and nuts, and thereby avoided insulting their enthusiastic hosts.

From that point on, the Guttmans were treated as royalty and were given carte blanche. They were offered a special tour guide and driver, and to be put up in the best hotel, but they graciously opted to honor their agreement with Ibraham, their own tour guide, and remained in the splendid Four Seasons Hotel. Four bodyguards riding in a jeep and holding machine guns accompanied the Guttmans and Ibraham throughout the rest of the trip.

The couple requested to see the Pyramids, which was high on their wish list. Reuven couldn’t resist asking if he could be photographed wearing a tallit and standing with the Pyramids behind him. He thought of the words in Exodus, “The Egyptians enslaved the children of Israel with backbreaking labor,” and of how Pharaoh forced our ancestors to build elaborate structures. Reuven was permitted to take the picture quickly and discreetly so other visitors wouldn’t spot him.

The Guttmans were given a private tour of tombs that are closed to the public. The tombs’ walls are lined with gold, and they were shown the coffin and remains of the Pharaoh from the time of the Exodus.

Esther and Reuven visited five synagogues that have remained shut since 1967. They were kept immaculately clean, and all the chairs, siddurim and Humashim were in place as if services were still being held. One of the guards asked Reuven to open a Torah and read it to him.

In one of the synagogues, the Guttmans were introduced to one of the three remaining Jews in Egypt, Ms. Magda Haroun. She was preparing for an upcoming conference on Maimonides and preserving Egyptian Jewish heritage.

They set out to visit the shul of the Rambam, traveling down an unpaved road in a poor and rustic area. This shul, too, was maintained in pristine condition as if a caretaker cleaned it daily. The building was connected to the Rambam’s home, which consisted of one large room and then another adjoining room which housed his medical clinic. Reuven asked Ibraham why the Egyptian government conserves the shul so perfectly, and Ibraham responded, “Your history is our history.”

Ibraham showed them the oldest existing picture of the Rambam, and offered Esther a black velvet box containing a gold medal engraved with the Rambam’s picture. Esther accepted the dazzling gift, and gracefully expressed her profound gratitude.

As the Guttmans and their entourage walked the streets on their way to museums and other sites, people thought Esther was a celebrity, and asked for a blessing or picture with her. A group of teenage girls were even let out of school early to meet Esther and kiss her hand.

She and Reuven were awed by the people’s warmth and enormous respect for the Rambam and his family. The VIP access to historic sites, including Jewish ones, which are closed to the general public, was priceless. When they visited the Jewish cemetery, they were promised that it would be cleaned up.

On Friday, the fifth and final day of their vacation, the Guttmans flew directly to Israel on a private flight prearranged for them by their genial hosts.

As the Guttmans shared their story with me, Esther spoke humbly about her connection to the Rambam, and her rabbinical ancestors. She explained that her parents were both born in the States. Her mother, Helen Ashkenazie, was of Syrian descent, and her father, Rabbi Mordechai Maimon, zt”l, was of Turkish origin, and was the founder and rabbi of the Sephardic Congregation of Mapleton. Esther’s paternal grandfather, Yaakov, was born in Turkey (the family arrived in Turkey just over a century ago). Ceil Ashkenazie, z”l, her maternal grandmother, was featured in several Sephardic Heritage Museum films about the Syrian community, showing how they persevered during the depression and WWII.

Rabbi Solomon Maimon, zt”l, Esther’s great-uncle, was the first Sephardic rabbi to be ordained in the U.S. at Yeshiva University. He served as rabbi of Seattle’s Sephardic Bikur Holm Congregation for over 40 years, and as Chief Rabbi of the Seattle Va’ad HaRabanim.

What I found most inspiring is that the Guttmans traveled over a three-year period to every place that the Rambam lived in, retracing his steps in Cordova, Spain; Fez, Morocco; Israel; and Egypt.

Reuven’s perspective on traveling is to maintain a positive attitude and demonstrate the utmost respect to the local population. “It’s all about communication and respect,” he says. “Act like a chameleon, a person who can adapt to any group or situation. Avoid arrogance or entitlement.”

Esther left Cairo with an upbeat view of Egypt. “The people and government were welcoming, generous and respectful, always looking out for us. The experience connected me to my distinguished ancestry and to the history of Klal Yisrael [the Jewish Nation].”

Ellen Geller Kamaras, CPA/MBA, is an International Coach Federation (ICF) Associate Certified Coach. Her coaching specialties include life, career and dating coaching. Ellen works part-time as an entitlement specialist at Ohel Children’s Home and Family Services. She can be contacted at ellen@lifecoachellen.com (www.lifecoachellen.com).