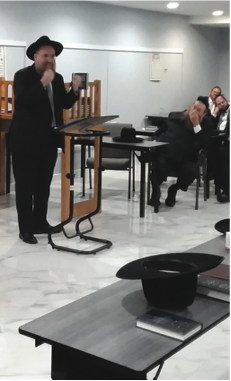 At summer’s close, adrenalin flows for educators and students alike. This bespeaks an opportunity for Torah Umesorah (TU) to offer growth and professional development. Thus, was conceived “An Evening for Sephardic Chinuch – Preparing for the New School Year,” an event that took place last month at the Jersey Shore.

This new project focused on the Sephardic communities of Brooklyn, Deal, and Lakewood. The program provided edification and inspiration for approximately 50 participants, who represented the spectrum of yeshivot, converging on the Jersey Shore to discuss innovations and proposed educational improvements for the future.

First, rebbeim were invited to one of four homes of community members. There they were treated to lavish dinners provided by gracious hosts. Groups were pre-divided based on grade levels taught. Challenges confronting primary grade rebbeim differ from those facing middle school rebbeim.

Over dinner, the groups networked. The networking discussions focused on prepared questions related to specific levels: primary, 3rd and 4th grades, 5th and 6th grades, and 7th and 8th. The networking sessions, moderated by either a menahel or a TU director, were vibrant in all locations.

Participants then arrived at the program’s second phase, at the Park Ave. (Ohel Simha) Synagogue, which generously provided their facility.

Opening words were delivered by TU’s menahel, Rabbi David Nojowitz, wishing rebbeim success in the new year. He then introduced Rabbi Uren Reich, of the Woodlake Yeshiva (Lakewood), who spoke words of hizuk in advance of the new year. Rabbi Reich was followed by Rabbi Mordechai Kirshenbaum, a principal in Ateret Torah in Brooklyn, who gave guidance on how to approach the subject of technology with students.

This initiative – one of many for community schools – was so successful that planning is already underway for the next event for rebbeim this winter. 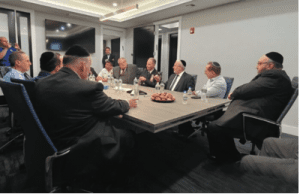 Prominent leaders and liaisons representing Flatbush organizations, synagogues, and yeshivot discussed security concerns for the High Holy days and beyond.

Chief Kemper is a 30-year veteran of the department, and is no stranger to the Jewish community, as he has previously served (for four years) as the Commanding Officer of the NYPD’s 90th Precinct in Williamsburg.

Chief Kemper assured the leaders that there would be increased holiday security arrangements and he praised the invaluable cooperation and coordination the police maintain with the Flatbush Shomrim.

An Evening of Unity and Vision at Magen David Yeshivah

Mrs. Gladys Haddad was introduced as the new president of Magen David. She joins a long and illustrious list of deeply committed community members who have held the mantle since the school’s founding.

Jeff Sutton, host and longtime MDY trustee, delivered reflective remarks that noted the many fiscal trials Magen David has faced over the years. He received a round of applause when he announced that today Magen David Yeshivah is completely debt-free and all future contributions will be going solely to the benefit of our community students.

The night’s honorees, Eli Gindi and Mrs. Vivian Hidary, each addressed the crowd with heartfelt speeches that moved the audience with their sincerity and authenticity.