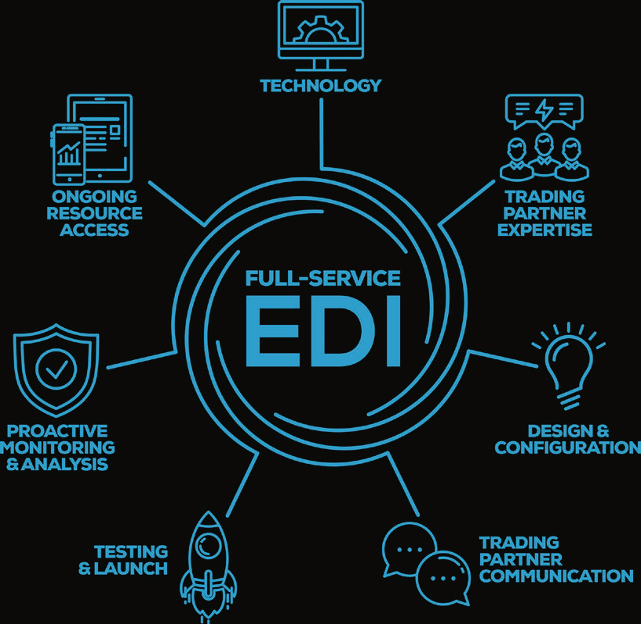 In the 1950s, computers were first made commercially available. While computing up until this time had mainly focused on scientific, mathematical, and defensive capabilities, new computers were designed for business functions such as banking and accounting. As technology progressed, the need for automation became more urgent. The less time spent on data entry meant the more time a company was able to devote to advancing and growing. A prime example of this is EDI.

The Electronic Data Interchange system, known simply as EDI, is an electronic way of exchanging business information with other organizations and trading partners. It eliminates the need for manual data entry, providing a more efficient and effective way to do business.

The EDI system is a technology that has been used since the late 1960s, with approximately two-thirds of all North American companies utilizing it in some form. Its effectiveness has grown significantly over time.

Like all systems and programs, EDI has both its benefits and its downfalls. Yes, it will automate the transfer of information, but since it is a technology developed over half a century ago, most modern software cannot support it on their own.

Most big-box retailers rely on EDI to exchange purchase orders, invoices, shipping notices, and other important documentation with their vendors. But there tends to be a knowledge gap in handling EDI the proper way, and some smaller companies find it difficult to implement EDI into their normal day-to-day operations. Finding the right EDI specialist who can integrate their system with EDI has been a challenge for a several companies.

Many solutions that are offered today can help to automate this integration, or at least claim that they can handle EDI. However, some companies quickly discover that though their software solutions help with integration, the companies themselves are still required to produce the data, state specifically how the EDI should function, test, and execute the EDI, which creates a significant burden for companies.

Understanding how to automate these processes is crucial to the growth of a company, and would require the following:

Handling and Upkeep of Inventory

Another of the most important automations that a company requires is directly linked to its handling and upkeep of inventory – from receiving, to storing, to shipping, to handling returns. Barcodes are one of the most important tools in this automation process. The most widely used are Universal Product Codes, known as UPC’s. UPC’s are unique identifiers for a product, and include human-readable numbers and

letters, as well as a scannable image. When inventory arrives at a warehouse, rather than count each piece/box by hand, you can simply scan the barcodes and the system will tally up your inventory, helping to keep accurate records.

In addition, some companies will make use of a Global Trade Item Number, or GTIN. This is a special 13-digit barcode that is most commonly used as a Master Barcode for a carton that contains the quantity of a specific UPC in that carton, giving the total tally of that UPC in that master carton.

Getting your own set of UPC and GTIN numbers is simple – you can purchase a block of codes online. But be careful, as there are many scammers out there selling fake barcodes, or barcodes that already belong to someone else. To be safe, companies can utilize a widely accepted, non-for-profit institution called GS1, which sells UPC’s and certifies that you own that specific UPC and no one else does. This is the way that retailers such as Amazon can make sure they are not getting the same UPC number twice from different vendors, which would cause chaos in their system. You can buy your UPC’s at GS1.org or purchase them through a reliable distributor who owns millions of barcodes and resells them in smaller batches for a marginal upcharge.

Some companies even go so far as to require RFID’s – Radio Frequency Identification. RFID’s allow a person to scan the label without needing to be in the line of sight of the barcode, using radio frequency to retrieve the data from the antenna.

There are a slew of options available to help automate company procedures to save time and money. During this busy season, these simple but valuable tips are what help companies to grow and be more efficient and keep up with demand at scale.